Mark Levin says Biden should be removed from office 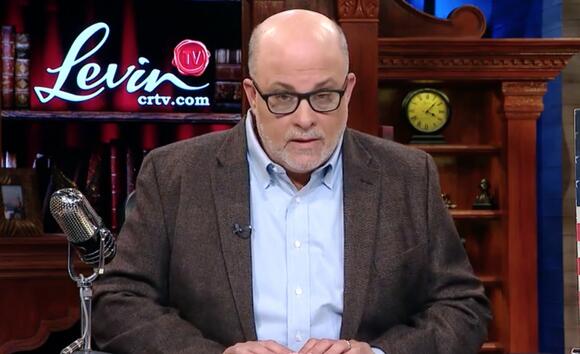 Mark Levin says it is time to start talking about using impeachment or the 25th Amendment against Joe Biden to remove the "most disastrous president in modern American history" from office.

The conservative commentator, who commands a large following on the Right, took aim at Biden's handling of the border situation and the coronavirus pandemic, making the case to fellow Fox News host Sean Hannity on Wednesday that the Democratic commander in chief violated the Constitution.

After a series of insults, Levin said Biden has "the border wide open in violation of our immigration laws" and invoked the administration's eviction moratorium , which came this week despite a Supreme Court decision in June ruling an earlier eviction moratorium could only be extended by Congress.

He also raised concerns about the health of the U.S. population, alluding to a Justice Department legal fight against Texas over an order by Gov. Greg Abbott to restrict the transportation of migrants, some of whom tested positive for COVID-19 , from being dumped into communities by federal officials as they await immigration proceedings.

MORE THAN 1,500 CORONAVIRUS-POSITIVE MIGRANTS RELEASED IN ONE WEEK INTO TEXAS BORDER TOWN

Section 4 of the 25 Amendment states : "Whenever the Vice President and a majority of either the principal officers of the executive departments or of such other body as Congress may by law provide, transmit to the President pro tempore of the Senate and the Speaker of the House of Representatives their written declaration that the President is unable to discharge the powers and duties of his office, the Vice President shall immediately assume the powers and duties of the office as Acting President."

Levin, who suggested Democrats weaponize impeachment to "chase" Republican presidents such as Donald Trump, seemed to acknowledge the long odds of removing Biden from office, at least right now, but encouraged people to start talking about it.

"It will never happen, but let's start to talk about it. He's doing more damage to this country, as far as I'm concerned, than any single one of our enemies," he said of Biden.

Totally Agree!!! There is no leadership under Biden. REPUBS...start IMPEACHMENT OR THE 25TH...GROW SOME BALLS AND STAND UP FOR THE AMERICAN PEOPLE....YOUR JOB MAY BE IN JEOPARDY IF YOU DON'T!!

While I agree that Joebama exhibits EXTREME signs of Mental Illness and an Unfitness for Office, and should be removeď, others measures need to be put into place first. Not limited to but i cluding most importanantly, measure to insure that Kamala Harris is NOT bumped up to President and Pelosi is banned from stepping into the Vice Presidency !!! That would be akin to throwing the country from the frying pan into the fire !!!

Both corrupt criminal organizations need to go. This country needs to get back to being governed by the Constitution and God's law.

President Joe Biden is losing support among critical groups in his political base as some of his core campaign promises falter, raising concerns among Democrats that the voters who put him in office may feel less enthusiastic about returning to the polls in next year's midterm elections.In just the past week, the push to change the nation's immigration laws and create a path to citizenship for young immigrants brought illegally to the country as children faced a serious setback on Capitol Hill. Bipartisan negotiations to overhaul policing collapsed and searing images of Haitian refugees being mistreated at the U.S.-Mexico...
PRESIDENTIAL ELECTION・14 HOURS AGO
TheAtlantaVoice

Houston, we’ve got a problem. A diplomatic spat with one of our oldest and closest allies. A legislative agenda stalled in a debate over the size of infrastructure packages on Capitol Hill and bumping up against major deadlines. A genuine crisis at the southern border. A confusing federal reaction to a global pandemic. Call it a crisis of credibility or […]
PRESIDENTIAL ELECTION・7 HOURS AGO
TheDailyBeast

Long-simmering criticism of the Biden administration’s approach to immigration policy by Democratic allies has taken on a new dimension this week, as civil rights groups and lawmakers express growing concerns that the treatment of Haitian asylum-seekers by American immigration authorities reinforces anti-Black racism. The undeniably racial component of the ongoing...
PRESIDENTIAL ELECTION・1 DAY AGO
Jano le Roux

Should the wall be finished? Joe Biden says no.

“Building a massive wall that spans the entire southern border is not a serious policy solution. It is a waste of money that diverts attention from genuine threats to our homeland security,” Biden wrote in his proclamation.
1 DAY AGO

Saule Omarova is more than just a finance industry critic — she has proposed essentially ending the banking industry as we know it.
PRESIDENTIAL ELECTION・1 DAY AGO
WashingtonExaminer

President Joe Biden will not use the powers of his office to shield Trump administration records from the purview of the Jan. 6 Select Committee.
PRESIDENTIAL ELECTION・1 DAY AGO
KFOR

A draft report of the election review in Arizona's largest county by supporters of former President Donald Trump found that President Joe Biden did indeed win the 2020 presidential contest there, an embarrassing end to a bizarre quest to find evidence supporting Trump's false claim that he lost because of fraud.
PRESIDENTIAL ELECTION・1 DAY AGO
NBC News

President Joe Biden will not shield Donald Trump's records from the congressional committee investigating the Jan. 6 riot at the U.S. Capitol by invoking executive privilege, White House press secretary Jen Psaki said Friday. Asked about Trump's assertion that he would fight subpoenas from the Jan. 6 Select Committee by...
POTUS・1 DAY AGO

A hand count from a controversial review of the 2020 US presidential election results in Arizona's largest county closely tracked the official tally showing Joe Biden beat Donald Trump, a draft copy of a report released on Friday showed. But it confirms what was already widely known -- that the 2020 election results will stand.
ARIZONA STATE・1 DAY AGO
TIME

This is not how Joe Biden wanted September to go. He expected to be barnstorming the country in the closing weeks of negotiations on his signature spending plan , pitching the expansion of health care benefits and child care provisions , and driving the momentum of those popular policies to the finish line.
PRESIDENTIAL ELECTION・1 DAY AGO
WashingtonExaminer

Just 247 days since President Joe Biden took the keys to the Oval Office, a majority of people appear to want him evicted and former President Donald Trump back.
PRESIDENTIAL ELECTION・2 DAYS AGO
Business Insider

Biden wanted his first call to a foreign leader to be to Angela Merkel, but she blew him off to spend time at her country house: report

Angela Merkel blew off Biden when he tried to call her first after taking office, per the Wall Street Journal. Merkel brushed off the "symbolism" of Biden wanting to reach out to before other world leaders as "irrelevant." The snub from Merkel, who is stepping down as chancellor, shows disillusionment...
PRESIDENTIAL ELECTION・2 DAYS AGO

President Joe Biden's Office of Management and Budget is due to release shutdown guidance Thursday - a week before the government shuts down if Congress doesn't pass a funding bill. OMB's spokesperson Abdullah Hasan told Punchbowl News that 'prudent management requires that the government plan for the possibility of a...
PRESIDENTIAL ELECTION・2 DAYS AGO
The Conversation U.S.

A recent Washington demonstration supporting those charged with crimes for the Jan. 6 insurrection at the U.S. Capitol fizzled, with no more than 200 demonstrators showing up. The organizers had promised 700 people would turn out – or more. But the threat from far-right insurrectionists is not over. For months,...
PRESIDENTIAL ELECTION・2 DAYS AGO
WashingtonExaminer

The Five: Biden's border catastrophe is a crisis because 'Joe is the system' and 'the system is broken'

President Joe Biden intentionally broke the homeland security system that kept America's borders under control, in part because he, as a five-decade figure in the federal government, is the system, the panel on "The Five" discussed Thursday. Host Greg Gutfeld noted the figures thus far being provided by the administration...
DEL RIO, TX・2 DAYS AGO
TheDailyBeast

A lengthy, chaotic review of Maricopa County, Arizona’s 2020 vote by an obscure Florida tech company with no elections experience has concluded that President Joe Biden did win, after all. In fact, according to drafts of the final report obtained by The Arizona Republic on Thursday night, Cyber Ninjas’ “audit” found that former President Donald Trump received 45,469 fewer votes than Biden. Maricopa County’s count had Trump losing by 45,109 votes. County Board Chairman Jack Sellers told the Republic the draft report’s conclusions show “the tabulation equipment counted the ballots as they were designed to do, and the results reflect the will of the voters... That should be the end of the story. Everything else is just noise.”
MARICOPA COUNTY, AZ・2 DAYS AGO
CBS Boston

BOSTON (CBS) – “My first reaction was ‘wow'” said Iowa pollster Ann Selzer of her new survey for the Des Moines Register showing the bottom falling out of President Joe Biden’s standing among Iowans. It takes a lot to stun Selzer, one of the nation’s most respected pollsters for decades. But her survey found Biden’s modest honeymoon there has collapsed in a storm of voter disapproval. Support for his handling of the U.S. withdrawal from Afghanistan and the migrant waves at the southern border has plummeted. And approval of his handling of the pandemic, once a strong point, has cratered, down 17%...
PRESIDENTIAL ELECTION・3 DAYS AGO
International Business Times

Dominion Systems, the voting systems company at the center of conspiracies about the 2020 U.S. presidential race, has forced former President Donald Trump’s campaign to admit they knew all along the accusations made on election fraud were unfounded. In its defamation lawsuit against the Trump campaign, an internal memo was...
PRESIDENTIAL ELECTION・3 DAYS AGO