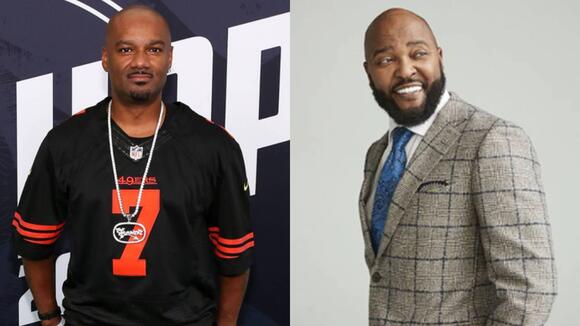 ATLANTA — Fresh off a highly successful 2020-21 season, the Atlanta Hawks announced Wednesday they’ve made a few changes off the court.

It’s not something that will affect the team, but if you go see the team play at State Farm Arena, you might notice a difference in the game production experience.

The Hawks have parted ways with longtime arena public address announcer Ryan Cameron after 17-years. When Cameron, an afternoon radio DJ at Majic 107.5/95.5 took the job back in 2004, it was the first time the team had a Black male in the role.

Cameron was there for nearly 700 games.

“We are excited to continue growing our partnership with Audacy both on-air and in-arena. They have been a tremendous partner for eight years, finding ways to grow their audience and reach throughout Atlanta. Tenitra and Big Tigger will add new elements and talents to our in-arena show,” said Hawks & State Farm Arena Chief Revenue Officer Andrew Saltzman.

The reaction to Cameron leaving has been mixed. Quite a few Hawks fans let their feelings be know on Twitter, most were not happy.

Others thanked Cameron for his service to the team and city.

The team also announced Tenitra Batiste of 92.9 The Game in the role of in-game Sports Anaylst.

The Hawks have been partners with 92.9 The Game since 2013 and the company that owns the radio station, Audacy, also is the owner of V-103.

The Atlanta Hawks and the rest of the NBA are now days away from the opening of training camp (Sept. 28). The Hawks released their training camp roster Wednesday afternoon. The Hawks also announced the signings of C Johnny Hamilton, G A.J. Lawson, G/F Timothe Luwawu-Cabarrot and C Jahlil Okafor on Wednesday. The four players will essentially be competing for the final roster spot, and the logical guess would be that the final spot goes to either Okafor or Luwawu-Cabarrot. Both Okafor and ‘TLC’ have expanded NBA experience and should be able to provide adequate depth as the ‘15th man’.
NBA・4 DAYS AGO
basketball-addict.com

It’s hard to be Ben Simmons right now. He’s found himself in the headlines once again after publicly stating that he wants out of the Philadelphia 76ers. While he has every right to voice his displeasure, exiting the team on the heels of an atrocious performance in the NBA Playoffs won’t make fans very happy. […] The post VIDEO: Dwyane Wade’s son Zaire gives the business to Ben Simmons appeared first on ClutchPoints.
NBA・24 DAYS AGO
The Spun

Ben Simmons’ days as a member of the Philadelphia 76ers appear limited. Keith Pompey of the Philadelphia Inquirer reported on Tuesday that Simmons has had enough of the Sixers and that he’d like to be traded. He’s reportedly even willing to holdout until Philly ships him elsewhere. “Ben Simmons tells...
NBA・26 DAYS AGO
fadeawayworld.net

Russell Westbrook is an absolute beast on the court, and there are few who can compare to his energy and passion. Russ is also known for his rather flashy fashion choices. Over the years, Westbrook has made countless headlines for his crazy, wacky, and intriguing attire. Recently, Westbrook captivated audiences...
NBA・15 DAYS AGO

The Atlanta Falcons should be lining up possible replacements for Matt Ryan. While replacing a player at Ryan’s level isn’t going to be possible Atlanta should be at least looking at the landscape considering the fact they have put Ryan behind a line that may get him hurt this season.
NFL・9 DAYS AGO
fadeawayworld.net

Dirk Nowitzki Rejected $92 Million Deals From The Lakers And The Rockets And Signed A 3-Year, $25 Million Deal To Stay With The Mavericks

There is no doubt in any Mavericks fan's mind that Dirk Nowitzki is the greatest player in the franchise's history. The gentle giant from Germany was a fabulous player and could seemingly do it all. Nowitzki was extremely skilled and brought incredible hustle and effort to the court every time...
NBA・13 DAYS AGO
ClutchPoints

Phoenix Suns All-Star Devin Booker and his girlfriend Kendall Jenner were reportedly made witness to a road accident that proved to be fatal. According to Teresa Roca of The U.S. Sun, the Suns star was traveling with Jenner last week in Biloxi, Mississippi, when traffic reached a standstill. The couple exited the vehicle and caught a glimpse of a tragic accident that forced motorists to a screeching halt.
NBA・21 DAYS AGO
fadeawayworld.net

Kevin Wayne Durant has solidified himself as one of the best players in basketball. Through 13 seasons in the league, the 27-point-per-game scorer is an 11x All-Star, 2x Scoring Champion, and 9x All-NBA player. And while we've all grown accustomed to Durant's theatrics now, it can still be rather shocking...
NBA・15 DAYS AGO

After pulling off an incredible fashion statement, Los Angeles Lakers star Russell Westbrook is now being accused by former Kansas City Chiefs running back Larry Johnson of performing an illuminati ritual. Russell Westbrook went viral on social media after showing up to the Thom Brown Spring 2022 show during New...
NBA・11 DAYS AGO
All 76ers

Ben Simmons Shows Off his Shooting in New Workout Video

The Philadelphia 76ers are set to return to training camp in a few weeks. In the meantime, members of the Sixers are preparing for the upcoming season by doing their own thing and working with personal trainers somewhere other than Camden. Sixers guard Ben Simmons packed up and left for...
NBA・22 DAYS AGO
International Business Times

Former Indiana Pacers point guard Darren Collison could be making his way back to the NBA. Golden State Warriors beat reporter Anthony Slater of The Athletic reported that Collison could be eyeing a return to the NBA with either the Warriors or the Los Angeles Lakers. “But nobody, in that...
NBA・7 DAYS AGO
AllPacers

Many people believe that Vince Carter, Michael Jordan and Dominique Wilkins are probably three of the best dunkers to ever step foot in the NBA. However, one name that does not get brought up enough is Gerald Green. Green played 12 seasons in the NBA with the Boston Celtics, Miami...
NBA・14 DAYS AGO

Russell Westbrook has stirred up some controversy on the internet once again. Last time it was because it was announced he’d be joining the already stacked Los Angeles Lakers as the West Coast team looks to nab its second championship in 3 seasons, but now it’s got to do with his latest outfit. View this […]
NBA・14 DAYS AGO
fadeawayworld.net

Despite winning championships with the San Antonio Spurs, Robert Horry unintentionally earned much hate from Spurs fans after messing with the franchise's biggest idol. A couple of years ago, the 7x NBA champion talked about two former teammates, Hakeem Olajuwon and Tim Duncan. He picked between the two legends, going with the Houston Rockets icon, saying he was 20 times better than Duncan. During an old appearance on ESPN's The Jump, Horry said:
NBA・29 DAYS AGO
fadeawayworld.net

NBA Rumors: Warriors And Pelicans Could Enact A Trade That Would Send Brandon Ingram To Golden State

The Golden State Warriors are a team that will have championship aspirations next season. That just comes with the territory of having Stephen Curry at the peak of his powers on your team, and Klay Thompson finally returning from injury. The Warriors have a lot of younger players on the...
NBA・19 DAYS AGO
ClutchPoints

Los Angeles Lakers star LeBron James is 36 years old, but he’s still a little kid at heart. James often posts on social media like a kid and is often seen being a goofball and enjoying the hell out of life, rather than just being super serious all the time.
NBA・17 DAYS AGO
fadeawayworld.net

Shaquille O'Neal Says Damian Lillard Should Leave The Blazers And Join Forces With Another Star: "I Don’t Really Like Guys Teaming Up, But This Is The Way It Is…”

For years, fans and media members have tried to convince Damian Lillard to leave the Portland Trail Blazers. After years of mediocrity, the franchise has yet to show they can build a title-contending team around Lillard, and most stars would have left long ago. Like James Harden, Kevin Durant, and...
NBA・18 DAYS AGO
Distractify

Lakers Star Anthony Davis Just Got Married, but Who Is His New Wife, Marlen P?

As one of the biggest stars in the NBA, it's fitting that there were plenty of high-profile guests in attendance for Anthony Davis' wedding. Lebron James, Russell Westbrook and Jared Dudley were all there to celebrate the occasion, which was held quite recently. Amidst all the hubbub and celebrity guests, though, there were some who wanted to know more about Anthony's new bride.
NBA・6 DAYS AGO
Bleacher Report

Montrezl Harrell On Not Being Invited To Anthony Davis' Wedding: "Nah Bruh Don't Like Me Like That!"

Montrezl Harrell joined the Los Angeles Lakers in hopes of winning an NBA championship. He previously played with the LA Clippers, where he established himself as one of the best players off the bench. Unfortunately, his stint with the purple and gold was short and honestly uneventful. The 27-year-old was...
NBA・5 DAYS AGO