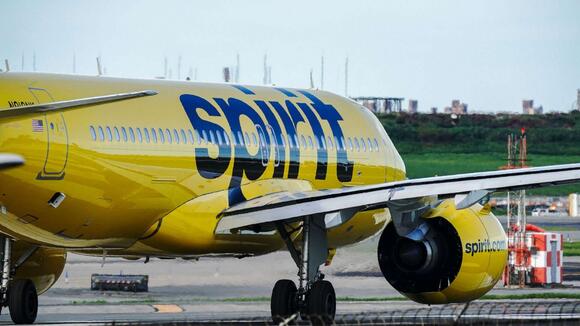 Thousands of Spirit Airlines passengers are still facing canceled flights on Wednesday as the airline's operational meltdown stretches into a third day .

As of Wednesday afternoon, Spirit cancelled 418 flights, or 60% of its daily operations.

So far this week, Spirit has had to cancel around half of its flights each day: 42% of its Monday flights and 61% of its Tuesday flights.

"What's this been like for you?" ABC News' Correspondent Victor Oquendo asked a traveler who has been trying to get to Washington, D.C., from Miami.

"Nothing to eat, nothing to drink, nothing," Natasha Baptiste responded.

Other Spirit customers told ABC News that they were stranded and forced to spend the night at Spirit bases such as Fort-Lauderdale Hollywood International Airport in Florida.

MORE: Should you delay your trip due to the delta COVID-19 variant surge? Experts weigh in

The airline initially said cancelations would slow down by Tuesday, but a spokesperson explained that the cancelations were the result of a "perfect storm," blaming weather, staffing shortages and crews reaching the hour limits in which they are legally able to fly.

In its latest statement issued on Wednesday, Spirit vowed that the cancelations will finally start dropping on Thursday.

"We've dealt with overlapping operational challenges including weather, system outages and staffing shortages that caused widespread irregularities in our operation and impacted crew scheduling," Spirit said in a statement. "These issues were exacerbated by the fact that we are in peak summer travel season with very high industry load factors and more limited options for Guest re-accommodations."

After being hit with an IT issue Tuesday that affected crew scheduling, the airline said they have "implemented a more thorough reboot of the network" which allows them to get crews where they need to be to restore normal operations.

The airline will now provide double pay to flight attendants who pick up extra shifts.

The low-cost carrier said that they've taken an "in-depth" look at the challenges they are currently facing and have "identified opportunities for improvement."

"We continue to work around the clock to get our Guests where they need to be," Spirit insisted.

Spirit recommends customers affected by the cancelations use its online chat feature for assistance.

Experts say take stock of any vouchers you might be sitting on, and know you can change most flights flight without a fee.
TRAVEL・6 HOURS AGO
BoardingArea

How cheaply could you fly on a British Airways Concorde?

It is generally accepted that flying on Concorde was for the 1%. You know, royalty, wealthy people, top flight politicians, A-list actresses, models, corporate high flyers, rock stars and so on. What is not known is that you could fly the supersonic aircraft relatively inexpensively. You could of course use...
LIFESTYLE・1 DAY AGO
Louisiana Illuminator

Flight attendants have been subject to unprecedented harassment over masks and more during the pandemic, and a U.S. House panel on Thursday heard the raw details of those “air rage” incidents. While there’s no hard data, the leader of the flight attendants’ union said the most aggression appears to occur in Southern states where there’s […] The post Huge uptick in pandemic ‘air rage’ hits flight attendants appeared first on Louisiana Illuminator.
PUBLIC HEALTH・2 HOURS AGO
iHeartRadio

The incident was the latest in a recent surge of aggressive behavior on flights.
PUBLIC SAFETY・56 MINUTES AGO

United Airlines Hit With $1.9 Million Fine for Holding Passengers On Planes for Hours During Delays

United Airlines has been slapped with a total of $1.9 million in fines for avoidable tarmac delays in which the airline forced thousands of passengers to wait on planes for hours at a time. The penalty is the largest ever of its kind since the Department of Transport (DOT) and...
WEATHER・2 DAYS AGO
Business Insider

Two Hawaiian Airlines flights from Honolulu were diverted Thursday after a passenger hit a flight attendant "unprovoked" and another refused to mask.
LIFESTYLE・2 DAYS AGO
Business Insider

JetBlue Airways just began flying between New York and London with one of Airbus' newest jets. The Airbus A321neoLR is the next-generation variant of the popular A321 and is capable of flying transatlantic flights. JetBlue has packed the aircraft full of customer-friendly features that take away from the fact that...
AEROSPACE & DEFENSE・2 DAYS AGO
IBTimes

A Shared No Fly List? Delta Wants Airlines To Team Up

Delta Airlines wants other carriers to help when it comes to protecting their flights by sharing their individual lists of unruly passengers, a company executive said on Friday. Kristen Manion Taylor, senior vice president of in-flight service, wrote to flight attendants on Wednesday to inform them that the carrier has...
INDUSTRY・2 DAYS AGO

Over 70% of all unruly passenger incidents in 2021 are 'mask-related'
MIAMI, FL・2 DAYS AGO
Business Insider

A video shot in selfie mode appears to feature a flight attendant promising to annoy maskless passengers and wake them up when if they fall asleep.
LIFESTYLE・8 DAYS AGO
Business Insider

JetBlue bans a husband and wife from using the airline for refusing to wear masks properly and swearing at staff, a report says

JetBlue said it removed a Florida couple from a flight for refusing to wear their masks properly. The airline told NBC News that the man became verbally and physically aggressive. The couple have subsequently been banned from flying on JetBlue again in the future. A couple is said to have...
AEROSPACE & DEFENSE・16 DAYS AGO
Washington Post

A woman was late for her flight. So she told airline workers there was a bomb on the plane, police say.

Marina Verbitsky arrived at her terminal in Florida’s Fort Lauderdale-Hollywood International Airport on Monday night with her husband and son, but they were too late: The plane was about to take off. Verbitsky told an airline employee she needed to get on the plane because her son had school, a...
PUBLIC SAFETY・18 DAYS AGO

There was mid-flight chaos on one American Airlines flight over the Labor Day holiday after a passenger allegedly began growling and berating the flight attendants on board. "What? What? What? What are you going to kick me off this flight?" the 61-year-old man taunted the flight crew, video of the alleged incident shows.
LIFESTYLE・19 DAYS AGO
Post Register

SEATTLE (KOMO) — An ordeal by an Alaska Airlines passenger who was escorted off a flight from Seattle-Tacoma International Airport to Alaska last week apparently because of what she was -- and wasn't -- wearing has gone viral after she shared her experience about what happened on social media. Ray...
SEATTLE, WA・20 DAYS AGO
New York Post

This was some LAX security. A homeless man managed to breach a fence at the Los Angeles International Airport and board an American Airlines plane before a cleaning crew alerted police, according to KCAL. Matthew Maine, 31, was arrested on a trespassing charge after prying his way under the perimeter...
LIFESTYLE・26 DAYS AGO
johnnyjet.com

VIDEO: Where The Hell Is Miami Airport Security?

I travel to 20+ countries a year sharing my firsthand knowledge of reward travel, travel credit card deals, travel tips and more. If you’re sick of reading stories or watching videos of brutal incidents happening at Miami Airport, then just close this story now. Because guess what? It’s happened yet again.
LIFESTYLE・29 DAYS AGO

Nicholas Goldberg: Airports to passengers: Do it yourself

My first trip overseas since the pandemic offered a stark reminder of how workers are being replaced by robots and automation.
LOS ANGELES, CA・4 HOURS AGO
610 Sports Radio

Two separate Hawaiian Airlines flights were forced to land early this week because of unruly-passenger activity. Flight HA 152 and Flight HA 22 out of Honolulu returned to Daniel K. Inouye International Airport on Thursday due to brash and hazardous behavior from two passengers onboard, the Star-Advertiser reported. In the...
LIFESTYLE・1 DAY AGO
ZDNet

If any airline has done reasonably well out of the pandemic, it's United. Somehow, it's avoided being the object of too much derision -- other than its fanciful claim that it's so very hard to get Covid on a plane (so, you know, we'll try and stuff as many passengers in as we can).
INDUSTRY・2 DAYS AGO
CBS Baltimore

BALTIMORE (WJZ) —  The weather is perfect for an early fall trip, and let’s not forget about the upcoming holidays. Many Americans plan to travel over the next few months, but COVID remains in the back of many people’s minds. The Rinks are on a weekend getaway from Philadelphia. “We just booked the room and came down and just walking around, getting out exercise in,” said Pauline Rinks. A new AAA survey shows that 55% of American adults are planning a vacation of at least one overnight stay before the end of next year. That same survey shows one-third of them are more...
TRAVEL・15 HOURS AGO