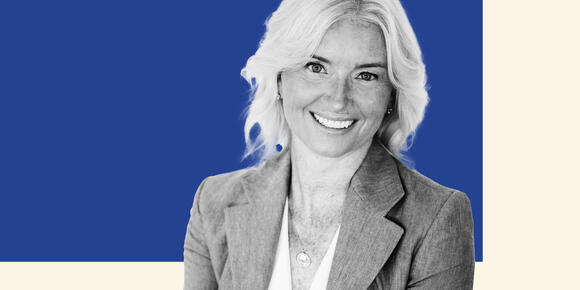 Everson, a leading advertising executive who resigned from Facebook in June, will start at Instacart on September 7, the grocery-delivery startup said on Wednesday. Current president Nilam Ganenthiran will become a strategic advisor to Simo, who is succeeding founder Apoorva Mehta as Instacart comes off a massive pandemic growth spurt and prepares for an expected initial public offering. The San Francisco company recorded $1.5 billion in revenue last year and is privately valued at $39 billion, but needs to fend off fierce competition from other delivery services and figure out new growth strategies, now that post-lockdown customers are returning to in-person shopping.

Simo and her new president worked together at Facebook for about a decade, “and have become good friends,” Everson wrote on LinkedIn in May. Earlier this summer, the two women announced their departures from the social-media giant within weeks of each other. Now Everson will report directly to Simo, and assume responsibility for an expansive portfolio that includes Instacart’s retail, business development, and advertising operations, as well as its teams devoted to people, policy and government affairs, legal, partnerships, Instacart Pickup, and care.

“Carolyn’s an industry legend, best known for cultivating strong, trusted relationships,” Simo said in a press release, adding that Instacart is tapping Everson to strengthen those relationships with more than 600 retail partners and thousands of advertisers.

The two executives are reshaping an Instacart leadership team that already includes another former Facebook colleague, chief operating officer Asha Sharma. She moved from her role as Facebook vice president of product in February, a month after Simo first joined Instacart’s board. And the Facebook hiring spree goes beyond the C-suite: Last month, The Information reported that Instacart has hired at least 55 engineers, product managers, recruiters, designers and data scientists from Facebook so far this year. (Instacart downplays the suggestion that it’s targeted one particular tech giant for poaching; a company spokesperson says that within the past 12 months, the company has hired “an equal number of people from Amazon, Google and Facebook.”)

But Instacart’s gender-diversity gain appears to be Facebook’s ongoing loss. Mark Zuckerberg’s enormous but controversy-wreathed company is facing questions about the future of its senior women, as Fortune reported last month. Simo’s departure, announced a month after Everson’s resignation, came on the same day that the New York Times published an extensive report describing how chief operating officer Sheryl Sandberg's influence has waned in the past half-decade. And earlier this year, Deborah Liu left her role as Facebook vice president of app commerce to become CEO of Ancestry.com.

Facebook chief diversity officer Maxine Williams last month downplayed the significance of these departures, telling CNBC, "We’re sad to see them go," but "the experience of being at Facebook gives people the opportunity to do so many other things." According to Facebook's 2021 diversity report, based on data pulled before Simo's exit, women held 35.5% of leadership roles at the company, a slight increase from 34.2% in 2020.

A Facebook spokesperson told Fortune Wednesday, "We wish Carolyn the best as she moves into this new chapter."

most powerful women in business from Fortune:

Subscribe to Fortune Daily to get essential business stories straight to your inbox each morning. Starbucks Corp. workers shouldn’t have the right to vote for a union on a cafe-by-cafe basis, the coffee chain told the U.S. labor board amid efforts by workers in Buffalo, New York, to organize. “The...
BUFFALO, NY・21 HOURS AGO
Fortune

Regulators have Big Tech in a corner

Stop me if you’ve heard this one before: If the U.S. imposes more regulations on the technology sector, then these companies — and the dizzying amount of money that tends to follow them around — will simply pack up and go elsewhere. Concerns about facial recognition, say, are valid —...
TECHNOLOGY・20 HOURS AGO
MarketWatch

A Senate panel will grill a Facebook Inc. executive next week in the wake of a Wall Street Journal report that found Facebook had knowledge that its platforms have a negative impact on young users yet did little to address the matter.
WASHINGTON, DC・14 HOURS AGO
USA TODAY

If Facebook and other social media platforms can't show their products are harmless, Congress has to step in to protect children.
INTERNET・6 HOURS AGO

Former TV journalist John Stossel is demanding at least $2 million in damages from Facebook in a lawsuit he filed against the social media giant, alleging the company defamed him by appending fact-checking labels to two videos he posted about climate change. In a statement to Variety, a Facebook spokesperson said, “We believe this case is without merit and we will defend ourselves vigorously against the allegations.” According to Stossel’s lawsuit, in the past year he posted two short video reports on Facebook in which he “interviewed experts in the climate change arena.” In one video, “Government Fueled Fires,” about the 2020 wildfires...
INTERNET・1 DAY AGO
Fortune

Facebook’s smart glasses could be as big as Apple Watch

When Facebook debuted its latest gadget—so-called smart glasses, designed in collaboration with the eyewear giant EssilorLuxottica—earlier this month, I completely disregarded them. Having observed the past wreckage of Google Glass and Snap Spectacles, my subconscious delivered its verdict instantly: Dead on arrival. Imagine my surprise then when a friend showed...
ELECTRONICS・1 DAY AGO
pymnts

Payment platform Plastiq announced on Wednesday (Sept. 22) that it has selected a former American Express president to serve as its new president and board member. Kerry Hatch, whose background includes more than 30 years of strategy and operating experience in the financial services, technology, media, data and service industries, will guide the company’s product, engineering, talent, operations, business development and go-to-market tasks. She will navigate the next stage of the company as Plastiq rolls out new features for its payments platform, which enables 150,000 small and medium-sized businesses to make purchases even in instances where cards are not accepted. The API-powered solution enables its customers to embed card- and bank-funded payment options into the platform.
BUSINESS・1 DAY AGO

Facebook CTO Mike Schroepfer to Step Down Next Year

Facebook CTO Mike “Schrep” Schroepfer will resign from the post sometime in 2022, after 13 years leading technology operations for the biggest social media company in the world. Facebook said Schroepfer will become a “senior fellow” at the company next year, working on initiatives such as recruiting and developing technical talent and “fostering the company’s artificial intelligence investments.” After a transition period, Andrew “Boz” Bosworth — currently head of Facebook Reality Labs overseeing the company’s VR and AR businesses — will become the company’s next CTO. Schroepfer, in a Facebook post, said stepping down “is a difficult decision because of how much...
BUSINESS・1 DAY AGO
Fortune

Subscribe to Fortune Daily to get essential business stories straight to your inbox each morning. Facebook chief technology officer Mike Schroepfer, a 13-year veteran who oversees the social network’s work in artificial intelligence, virtual reality and the blockchain, will step down next year. Another longtime Facebook executive, Andrew Bosworth, will...
INTERNET・1 DAY AGO
Axios

Consumers who rushed to use delivery services during the pandemic won't abandon them even though most restrictions have eased, says Instacart's new president, Carolyn Everson. Why it matters: Instacart is rumored to be planning an IPO, though it reportedly tried to sell itself to a couple of rivals amid rumors of weakening customer demand for grocery delivery.
PUBLIC HEALTH・1 DAY AGO
winsightgrocerybusiness.com

Instacart released new research that finds that the online grocery platform created approximately 186,000 additional jobs in the U.S. grocery industry and increased total grocery revenue by $6.4 billion from 2013 through the second quarter of 2020. That includes approximately 116,000 jobs in the U.S. grocery industry—representing 70% of net grocery job creation—and $2.9 billion in additional grocery revenue before the pandemic began (between 2013 and 2019).
GROCERY & SUPERMAKET・1 DAY AGO

Subscribe to Fortune Daily to get essential business stories straight to your inbox each morning. Google is planning to buy New York City's St. John’s Terminal for $2.1 billion, making it the anchor of its Hudson Square campus. The announcement Tuesday arrives with the city buffeted by the pandemic and...
NEW YORK CITY, NY・2 DAYS AGO
AFP

Facebook on Tuesday fired back after a series of withering Wall Street Journal reports that the company failed to keep users safe, with the social media giant noting an increase in staff and spending on battling abuses. The company has been under relentless pressure to guard against being a platform where misinformation and hate can spread, while at the same time remain a forum for people to speak freely. It has struggled to respond. A series of recent Wall Street Journal reports said the company knew its Instagram photo sharing tool was hurting teenage girls' mental health, and that its moderation system had a double standard allowing VIPs to skirt rules. One of the articles, citing Facebook's own research, said a 2018 change to its software ended up promoting political outrage and division.
INTERNET・2 DAYS AGO
The Independent

Facebook’s semi-independent oversight board says it will review the company’s “XCheck,” or cross check, system following an investigation by The Wall Street Journal into the use of this internal system that has exempted high-profile users from some or all of its rules. The board said Tuesday that it expects to have a briefing with Facebook on the matter and “will be reporting what we hear from this” as part of a report it will publish in October. It may also make other recommendations, although Facebook is not bound to follow these. The Journal's report found that many VIP users abuse...
INTERNET・2 DAYS AGO
Orange County Business Journal

Arbonne PBC said it hired Christina Snyder to be chief growth officer, a new position at the Irvine beauty and wellness company. Snyder will oversee Arbonne’s team of independent consultants globally and reports to CEO Tyler Whitehead. She comes to Arbonne from Boon Supply, where she served as the company’s...
IRVINE, CA・4 DAYS AGO
Daily Mail

REVEALED: Facebook staff warned platform was a 'cesspool of anti-vaccine comments' that were hindering Zuckerberg's stated goal of promoting vaccines

Facebook employees had warned CEO Mark Zuckerberg that his social media platform had compromised his goal to use the company to get 50 million people vaccinated against COVID-19. Zuckerberg had announced the initiative in March, showing off Facebook's ability to connect users with vaccine providers to help make appointments, as...
INTERNET・5 DAYS AGO
travelmole.com

Wendy Wu Tours' global sales director John Warr has left the company. He has stepped down to pursue new opportunities. Warr had spent seven years with Wendy Wu, overseeing the UK, Australia and New Zealand markets. "John has been instrumental in the growth of Wendy Wu Tours, pioneering the development...
BUSINESS・5 DAYS AGO
siliconangle.com

Facebook Inc. said today it’s expanding its horizons when it comes to tackling coordinated behavior on the platform that might cause harm. The social media giant has for a long time cracked down on “coordinated inauthentic behavior,” although Facebook said that alone isn’t good enough. The company now wants to concentrate its efforts to tackle coordinated authentic behavior.
INTERNET・7 DAYS AGO