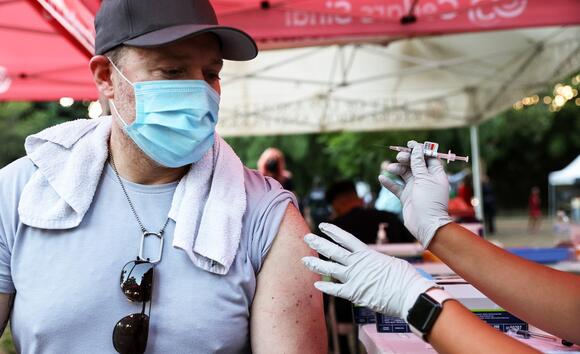 Americans’ positivity toward vaccination may not be waning as new national data suggests that more people are willing to get the COVID-19 vaccine with the delta variant surging across the country.

Conducted in partnership with Ipsos and Axios, the most recent survey examined the rising number of Americans willing to get vaccinated alongside increasing concerns over the delta variant and the threats it poses to America’s reopening plans.

Ultimately, 78 percent of Americans, or roughly 3 in 4, report being concerned about the delta variant.

Fifty-six percent of unvaccinated respondents indicate that they are concerned about the delta variant.

Given the increasing number of breakthrough infections among people who are fully inoculated against COVID-19, willingness to get the coronavirus vaccine has increased slightly, to 77 percent, up by two percentage points from mid-July.

This is a critical metric. Vaccinations have fallen into the divisive rhetoric surrounding the public health precautions created to help bring the pandemic to a halt, alongside wearing masks and social distancing.

Simultaneously, more Americans report using masks as the U.S. Centers for Disease Control and Prevention (CDC) recommend reimplementing mask regulations for public indoor spaces. The poll found that 57 percent of Americans reported wearing a mask “all or some of the time,” a five-percentage-point-increase from mid-July.

Vaccination rates and favorable attitudes toward getting vaccinated are also swayed by the myriad of organizations, both public and private, that are requiring their employees and patrons to show proof of vaccination.

The survey authors also asked its respondents who they blame for the resurgence of COVID-19 infections.

Unvaccinated individuals placed a moderate amount of blame on foreign travel into the U.S.

Despite the differences in identifying who is culpable for the delta variant outbreaks, more than two-thirds, or 66 percent of Americans, reported trusting the CDC in providing them with accurate information surrounding COVID-19.

The Head of Homeland Security and President Biden for not securing our borders and letting COVID infected people into the US.

If everyone would turn the clock back on onset of this virus Trump said stop all international travel into the states and the dems shut him down. This all stemmed from china and I believe is man made. Of all the pandemics that we’ve had never in the history of this country have we experienced the likes of this past year. It is all about control and taking our great country into socialism and communism as our freedoms are revoked. Wake up people. Or I will meet you all on the bread lines.

It’s actually the vaccinated whom are spreading covid… Come on fake news always trying to blame the ones who can actually think for themselves! #nevergettingthevaccine #notwearingmasks #fbiden

CDC issued an urgent message for any American vaccinated with Pfizer

As COVID cases continue to rise in areas across the U.S., officials are tracing outbreaks to a number of different events. Recently, a handful of states have sounded the alarm on COVID clusters tied to an activity that many of us might consider to be relatively innocuous. In regions that span the entire country, states are seeing a spike in COVID cases linked to high school and middle school sports.
EDUCATION・16 DAYS AGO
Rock Hill Herald

Nearly 60% of Americans surveyed in a poll support President Joe Biden’s new COVID-19 vaccine requirements. The White House announced last week that the Department of Labor’s Occupational Safety and Health Administration, or OSHA, is creating a rule that will require all companies with at least 100 workers to mandate COVID-19 vaccination or weekly testing for their employees before they can come to work.
PRESIDENTIAL ELECTION・13 DAYS AGO
Ladders

Moderna CEO predicts when COVID pandemic will be over — and why

Moderna CEO, Stéphane Bancel believes we’re looking at another 12 to 18 months of COVID-19 hindering normal life—though a less severe form of the disease will likely circulate around the world “forever.”. At HIMSS21, the global health conference that took place in Las Vegas recently, Bancel went on to predict...
PUBLIC HEALTH・2 DAYS AGO

Fact-check: Does the Pfizer COVID-19 vaccine kill more people than it saves?

After the FDA refused to back boosters for everybody aged 16 or above, Dr. Fauci said people should wait for a shot until they're officially eligible.
U.S. POLITICS・6 DAYS AGO
News Channel Nebraska

The current evidence on Covid-19 vaccines does not appear to support a need for booster shots in the general public right now, according to an international group of vaccine scientists, including some from the US Food and Drug Administration and the World Health Organization. "Current evidence does not, therefore, appear...
PUBLIC HEALTH・13 DAYS AGO
Matt Lillywhite

CDC Warns Some Refugees Tested Positive For A Dangerous Virus

The Centers for Disease Control and Prevention (CDC) has issued a public health warning about several refugees from Afghanistan testing positive for a dangerous virus called Measles. It's highly contagious and unvaccinated people frequently require hospitalization.
3 DAYS AGO

On the frontlines of the coronavirus, Former FDA commissioner Scott Gottlieb, author of the new book Uncontrolled Spread, appeared on Face the Nation yesterday, to offer a warning: we're still not prepared to fight pandemics. What can you do to stay safe? Read on for five essential points, straight from Goittlieb—and to ensure your health and the health of others, don't miss these Sure Signs You've Already Had COVID.
PUBLIC HEALTH・6 DAYS AGO
Observer-Dispatch

COVID-19 cases in New York surge 19%. Here is where the virus is spreading fastest

New coronavirus cases in New York rose 19% over the past week, state and federal records showed. The state reported 37,939 new cases, up from 31,981 new cases the previous week. But New York's increase still ranked among the lowest in the nation for COVID spread over the past week....
NEW YORK CITY, NY・6 DAYS AGO
WebMD

Sep. 23, 2021 -- A strain of COVID-19 first reported in Japan surfaced at a Kentucky nursing home in the spring. Deadline, citing a CDC report, said 26 residents and 20 workers tested positive for COVID-19 at a skilled care nursing home. The facility has 83 residents and 116 employees.
PUBLIC HEALTH・3 DAYS AGO
MarketWatch

Dr. Fauci says the ‘worst time in the world’ for a government shutdown is in the middle of a pandemic

The nation's leading disease expert added that he believes a shutdown would have a 'profound effect' and 'should be avoided, if at all possible.'
U.S. POLITICS・3 DAYS AGO
The Independent

One in 500 Americans have died of Covid-19, new data shows

About one out of every 500 Americans has died of Covid-19, according to the latest data. The shocking statistic comes as Covid deaths in the United States surpass 664,000, according to Johns Hopkins University. The US population at last count was 331.4 million people – which means about 0.002 per...
PUBLIC HEALTH・11 DAYS AGO
KSHB 41 Action News

The Centers for Disease Control and Prevention has endorsed COVID-19 booster shots for millions of older or otherwise vulnerable Americans.
PUBLIC HEALTH・2 DAYS AGO
jacksonvillefreepress.com

Most Americans believe the health benefits of Covid-19 restrictions are worth the costs, polling shows

Most Americans believe that the public health benefits of restrictions due to Covid-19 are worth the economic and lifestyle costs, according to a report released Wednesday by the Pew Research Center. Most adults say that restrictions on public activity during the pandemic hurt economic activity and kept people from living...
PUBLIC HEALTH・11 DAYS AGO
WEAU-TV 13

Americans’ spending on the rise, despite surge in COVID-19 cases

Americans continued to spend at a brisk pace last month in the face of rising COVID-19 infections, though much of it was done online and not at restaurants or other sectors in the U.S. economy beleaguered by the arrival of the delta variant. Retail sales rose a seasonally adjusted 0.7%...
RETAIL・10 DAYS AGO
Medscape News

Editor's note: Find the latest COVID-19 news and guidance in Medscape's Coronavirus Resource Center. A majority of people surveyed in a recent poll say that COVID-19 restrictions have helped slow the spread of the virus. In the Pew Research Center poll released this week, 62% of respondents said the restrictions...
PUBLIC HEALTH・9 DAYS AGO
WSB Radio

EXPLAINER: What are current COVID-19 guidelines for schools?

ATLANTA — (AP) — It's a back to school season like no other for students, teachers and parents across the U.S. Schools have opened nationwide this fall only to find thousands of students and their teachers sickened by the coronavirus. That wasn't the long-awaited return to normality many had hoped...
ATLANTA, GA・10 DAYS AGO