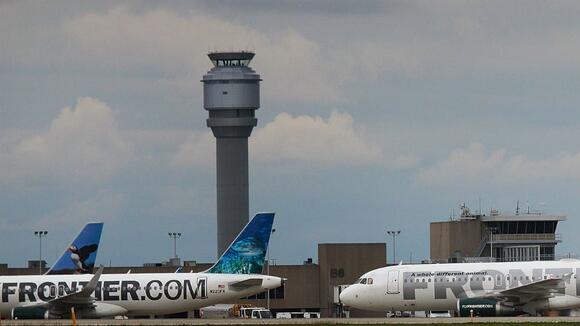 “Frontier Airlines maintains the utmost value, respect, concern and support for all of our flight attendants, including those who were assaulted on this flight,” the company said in a statement Tuesday.

“We are supporting the needs of these team members and are working with law enforcement to fully support the prosecution of the passenger involved,” the company added. “The inflight crew members’ current paid leave status is in line with an event of this nature pending an investigation.”

The statement comes after the company faced backlash for initially saying the crew would be “relieved of flying pending completion of investigation of the events.”

“Management suspended the crew as a knee-jerk reaction to a short video clip that did not show the full incident. Management should be supporting the crew at this time not suspending them. We will be fighting this with every contractual and legal tool available, but we would hope there will be no need for that as management comes to their senses and supports the people on the frontline charged with keeping all passengers safe,” Sara Nelson, the president of the Association of Flight Attendants-CWA, said in a statement Tuesday.

The incident occurred July 31 during a flight from Philadelphia to Miami.

Maxwell Berry drank two alcoholic drinks before assaulting the flight attendants and yelling on the airplane, the police report states.

Berry was then duct-taped to a seat on the plane and arrested when the flight landed. He was charged with three counts of battery.

BALTIMORE (WJZ) — Delta Airlines wants to create a national “No Fly” list of unruly passengers. The company said there are 1,600 people on its own list, but that doesn’t hold as much weight since those people are still free to use another carrier. Delta said air travel would be safer if airlines were allowed to share their “No Fly” lists with each other. The company’s internal “No Fly” list is different than the federal “No Fly” list.
LIFESTYLE・1 DAY AGO
610 Sports Radio

Two separate Hawaiian Airlines flights were forced to land early this week because of unruly-passenger activity. Flight HA 152 and Flight HA 22 out of Honolulu returned to Daniel K. Inouye International Airport on Thursday due to brash and hazardous behavior from two passengers onboard, the Star-Advertiser reported. In the...
LIFESTYLE・1 DAY AGO
Boston Globe

A JetBlue passenger who departed from Boston choked a flight attendant and tried to force his way into the cockpit of a Puerto Rico-bound aircraft while shouting in Spanish and Arabic that he wanted to be shot, the FBI said in court papers. The passenger was identified in an FBI...
BOSTON, MA・2 DAYS AGO
CBS News

Federal regulators have fined United Airlines $1.9 million for allowing multiple flights to sit on the ground for hours, the largest fine imposed by the government for such long delays. The Transportation Department said Friday that the 25 incidents occurred between December 2015 and February of this year. More than...
WEATHER・2 DAYS AGO

Two Hawaiian Airlines flights from Honolulu were diverted Thursday after a passenger hit a flight attendant "unprovoked" and another refused to mask.
LIFESTYLE・2 DAYS AGO
Seattle Times

A JetBlue passenger allegedly rushed the flight deck and attacked a flight attendant. The crew used a neck tie, flex cuffs and seat belt extenders to restrain him

A man on a JetBlue flight from Boston to Puerto Rico this week allegedly choked and kicked a flight attendant after he rushed the front of the plane and urged crew members to shoot him. Authorities said the passenger, identified in an FBI affidavit as Khalil El Dahr, also tried...
PUBLIC SAFETY・2 DAYS AGO
news4sanantonio.com

Airlines call for federal help after increase in unruly passengers

Passengers fighting in the aisles, even rolling on the floor. Out of control, often drunk or angry about mask mandates. A man seen growling and biting his own facemask. And another man had to be duct taped to his seat. In a recent survey, 85% of flight attendants said they...
LIFESTYLE・2 DAYS AGO
cbs3duluth.com

More than 1,600 people have been banned by Delta Airlines since the federal government has required airplane passengers to wear masks — and now, the company wants other airlines to share their ban lists. The number of people on those internal lists, separate from the federal no-fly list, topped 4,000...
INDUSTRY・2 DAYS AGO

Authorities are investigating two unruly-passenger cases that prompted two separate Hawaiian Airlines flights to return Thursday to Daniel K. Inouye International Airport. One incident involved an alleged unprovoked attack against a flight attendant on an interisland flight bound for Hilo, while the other involved a passenger who allegedly defied the federal face mask mandate on a flight to Seattle.
HAWAII STATE・3 DAYS AGO
CBS News

There's been an uptick in unruly passenger incidents on commercial flights. The Federal Aviation Administration said airlines reported more than 4,300 incidents – many involving intoxicated passengers or people defying mask mandates. Flight attendants got to tell lawmakers about the rise in harassment and violence on planes during a house...
U.S. POLITICS・3 DAYS AGO
milestomemories.com

FAA Wants Airlines to Do More to Curb Incidents of Unruly Passengers. The Federal Aviation Administration (FAA) has urged airlines to take more action on violent or unruly passengers. The request was made at a meeting on Tuesday. The FAA wants airlines to disclose within a week what steps they...
LIFESTYLE・3 DAYS AGO
ksl.com

The FAA has proposed $1 million in fines for unruly passengers, but flight attendant union leader Sara Nelson asked the US for more protection.
ECONOMY・5 DAYS AGO
Marietta Daily Journal

US FAA asks airlines to turn up heat on unruly passengers

The federal regulator charged with keeping the nation’s airways safe met Tuesday with representatives of U.S. passenger airlines and urged them to take more aggressive steps to reduce the incidents of unruly passenger behavior that have been on the rise during the Covid-19 pandemic. The Federal Aviation Administration said its...
LIFESTYLE・5 DAYS AGO
wypr.org

Anger in the Air: How Airlines Are Coping With Unruly Passengers

We have spoken many times on this show about incivility in the public square; the coarseness and vulgarity of much of what passes for public discourse; the dire need for basic politeness in an era of extreme political polarity; the ad hominem attacks that many employ as a substitute for reason and rational argument.
AEROSPACE & DEFENSE・5 DAYS AGO
Business Insider

JetBlue bans a husband and wife from using the airline for refusing to wear masks properly and swearing at staff, a report says

JetBlue said it removed a Florida couple from a flight for refusing to wear their masks properly. The airline told NBC News that the man became verbally and physically aggressive. The couple have subsequently been banned from flying on JetBlue again in the future. A couple is said to have...
AEROSPACE & DEFENSE・16 DAYS AGO
newsbrig.com

Delta Airlines said in a pair of internal memos to employees this week that it’s asked competitors to share their no-fly lists, to try to keep passengers who cause disturbances on planes from bringing their mayhem to other airlines. Since January 1st, the Federal Aviation Administration says it has received...
AEROSPACE & DEFENSE・1 DAY AGO
MyNorthwest

Washington Rep. Rick Larsen lead a hearing in the U.S. House Aviation Subcommittee on Thursday to address ongoing issues related to unruly airline passengers. Rep. Larsen — who chairs the aviation subcommittee — says bad behavior on airplanes has skyrocketed in the wake of the pandemic, and that airlines, Congress, and federal regulators need to do more.
WASHINGTON STATE・3 DAYS AGO
IBTimes

A Shared No Fly List? Delta Wants Airlines To Team Up

Delta Airlines wants other carriers to help when it comes to protecting their flights by sharing their individual lists of unruly passengers, a company executive said on Friday. Kristen Manion Taylor, senior vice president of in-flight service, wrote to flight attendants on Wednesday to inform them that the carrier has...
INDUSTRY・2 DAYS AGO