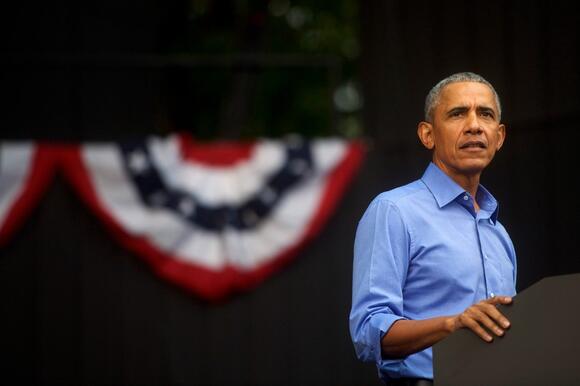 Former President Obama is now limiting the guest list for his 60th birthday party to family and close friends amid COVID-19 concerns.

The former president's spokesperson, Hanna Hankins, told The New York Times that the Obamas will “significantly scale back” the event amid concerns of the delta variant of the coronavirus.

“Due to the new spread of the Delta variant over the past week, the President and Mrs. Obama have decided to significantly scale back the event to include only family and close friends,” Hankins said. “He’s appreciative of others sending their birthday wishes from afar and looks forward to seeing people soon.”

The Hill first reported that the former president would be hosting a huge birthday bash on Wednesday on Martha’s Vineyard.

Aides said hundreds of guests who were initially invited would have been required to submit proof of a negative COVID-19 test to attend the outdoor event, and a designated coronavirus coordinator would have ensured all guidelines from the Centers for Disease Control and Prevention (CDC), the state and local authorities were followed.

A White House official said Tuesday that President Biden would not be attending the party, but "looks forward to catching up with former President Obama soon and properly welcoming him into the over 60 club.”

According to CBS Boston, the CDC raised Martha’s Vineyard to a “substantial” risk of COVID-19 on Tuesday. The agency recommends people wear masks indoors in areas of “high” or “substantial transmission.”

The party never ends for COVID-19

Maybe your favorite college football team lost this past weekend. Maybe it rained on your camping trip. Maybe your trusty old truck finally gave up the ghost. Here’s the thing: people hate bad news. As much as they crane their necks over to gawk at a motor vehicle crash, they seldom want to listen to other people’s problems. Misery may love company, but it finds it difficult nonetheless to attract it.
PUBLIC HEALTH・3 DAYS AGO
HuffingtonPost

Fox News host Bill Hemmer said Monday that he had walked out of a restaurant in New York City after employees asked to see a photo ID along with his COVID-19 vaccination card. “I popped into a restaurant three weeks ago,” he said during a segment on the city requiring proof of vaccination for many indoor activities, including dining. “I said, ‘I don’t have my vaccination card, but I do have an app,’ so I downloaded that and I showed it to them. And they said, ‘Sir, can we see something with your name on it?’”
3 DAYS AGO
Best Life

If You're Unvaccinated, the White House Has a New Warning for You

Even in the face of the Delta variant, a growing body of evidence shows that being vaccinated is an effective way to protect yourself from COVID-19—especially in preventing death or hospitalization from the disease. Recently, full approval of the Pfizer vaccine from the U.S. Food & Drug Administration (FDA) led to a surge in new mandates to be put in place by local officials, making the shots a requirement to enter certain businesses such as bars, restaurants, theaters, and gyms. But while such changes have so far been limited to the city or state level, the White House has made it clear that a major set of changes is coming very soon and warning that those who are unvaccinated may feel the effects.
U.S. POLITICS・7 DAYS AGO
Business Insider

Marine Cpl. Whitney McHaffie is possibly the first service member forced out of the military for violating COVID-related rules.
MILITARY・15 DAYS AGO

An unvaccinated Detroit couple passed away within hours of each other last week after being hospitalized for COVID-19 complications, leaving seven children behind to grieve their deaths. Fox 2 Detroit reports Troy Green fell too ill to attend a family trip to Florida. Two days after arriving in Florida, Green's...
DETROIT, MI・2 DAYS AGO
WashingtonExaminer

A federal judge has ordered the Biden administration not to use its public health authority to turn away any migrant families who illegally cross the southern border into the United States, an abandonment of U.S. policy in effect since the start of the coronavirus pandemic.
U.S. POLITICS・3 HOURS AGO
MarketWatch

People in the U.S. who received Moderna’s or Pfizer’s COVID-19 vaccine will be eligible for a booster dose in September

Federal health officials said Wednesday that a third dose of the COVID-19 shots developed by Moderna and Pfizer will be available in mid-September for Americans who have been fully vaccinated for at least eight months.
PUBLIC HEALTH・26 DAYS AGO
Vice

One of Israel’s most prominent anti-vaxxers has died of COVID – but it doesn’t seem to have led his hardcore supporters to rethink their views on the vaccine. Hai Shoulian, a 57-year-old anti-vaxxer who had spread conspiracy theories about COVID-19, died in Wolfson Medical Center in Holon, about a week after being admitted to hospital. On Saturday, he made a final post to Facebook, writing that he was in a “very serious condition” and unable to speak.
WORLD・2 DAYS AGO

The Pentagon is asking 2.9 million service members and contractors to come forward if they have symptoms of the mysterious 'Havana Syndrome'

More than 200 Americans around the world have been affected by the mysterious syndrome, and theories of its origin include a microwave weapon.
MILITARY・13 HOURS AGO
KSAT 12

SAN ANTONIO – San Antonio pediatricians say COVID-19 concerns and children returning to the classroom have led to an increase in doctor visits, although children are not getting sicker. While kids are not sicker, more kids are sick, according to Dr. John Fitch, with Heritage Pediatrics in Alamo Heights. He...
SAN ANTONIO, TX・12 DAYS AGO
MedicalXpress

As the United States battles COVID-19 vaccine hesitancy amid a surge in cases fueled by the delta variant, a new study co-authored by a New Mexico State University researcher examines how COVID-19 infections in social circles may influence vaccine willingness. In the study, Jagdish Khubchandani, public health sciences professor at...
PHARMACEUTICALS・6 DAYS AGO
Essence

With health concerns already an issue, the talk show maven has had to extend her time away due to her new diagnosis. Wendy Williams has further postponed the return of her daytime talk show as she focuses on getting her health on track. The daytime diva reported late last week...
PUBLIC HEALTH・1 DAY AGO

The COVID-19 pandemic has been unpredictable from the start: Few epidemiologists could have envisioned this is where we'd be, more than 18 months in. But a year and a half of study has enabled scientists to learn about the virus's patterns, particularly when it comes to initial symptoms. This is the latest research about the order in which those first physical signs appear. Read on to find out more—and to ensure your health and the health of others, don't miss these Sure Signs You May Have Already Had COVID.
NEW YORK CITY, NY・8 DAYS AGO
Best Life

More than a year and half into the COVID pandemic, health experts and officials continue to urge that the best way to end surges of new cases is by getting more people vaccinated, especially as highly transmissible variants, like Delta, continue to spread. In the U.S., President Joe Biden recently announced a new plan that includes vaccination requirements for many workers, including healthcare and federal employees. But that's just one way the U.S. government is taking measures to get people vaccinated; the latest move comes from the Department of Homeland Security (DHS).
IMMIGRATION・1 DAY AGO
checkyourfact.com

A post shared on Facebook claims that Vice President Kamala Harris was arrested in Singapore and that a new vice president has been announced. While Harris did recently travel to Singapore, she was not arrested during her trip. She has not been replaced as vice president. Fact Check:. Harris traveled...
CONGRESS & COURTS・1 DAY AGO
Hello Magazine

Meghan Markle and Prince Harry welcomed their second child and first daughter, Lillibet ‘Lilli’ Diana Mountbatten-Windsor this year on 4 June 2021, two years after the birth of their son, Archie Harrison, on 6 May 2019. During The Duchess of Sussex’s second pregnancy, photos taken when she visited The National...
YOGA・2 DAYS AGO
Newsweek

The ad, which popped up in Marjorie Taylor Greene's congressional district, includes a quote purporting to be from the Bible.
GEORGIA STATE・2 DAYS AGO
hngn.com

President Joe Biden won't get to the completion of his presidential term, according to renowned international professor Joe Siracusa, who cautioned the 78-year-old leader that the job "ages people." Professor Joseph Siracusa, a political scientist, warned that the position of president "ages people," noting that many presidents appear healthier and...
PRESIDENTIAL ELECTION・6 DAYS AGO
The Week

Caitlyn Jenner expressed shock on Tuesday night when voters turned out in force to vote "no" on the recall effort against California Gov. Gavin Newsom (D), telling reporters, "It's a shame." The Republican reality TV star was one of 46 candidates vying to replace Newsom; with 62 percent of the...
CALIFORNIA STATE・1 DAY AGO