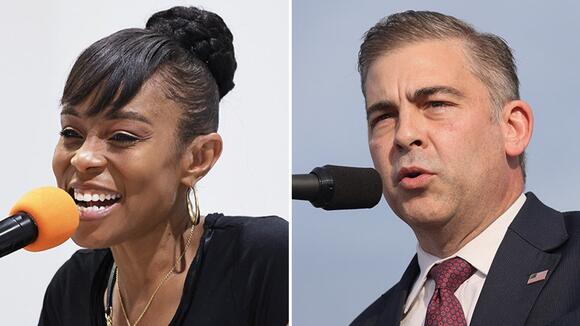 Primaries in two Ohio special House elections Tuesday served as stress tests for the state of the Republican and Democratic parties as their respective ideological and establishment flanks clashed.

In a ruby-red district outside of Columbus, energy lobbyist Mike Carey, who was endorsed by former President Trump , defeated a crowded primary field of about a dozen candidates. And in Cleveland, Cuyahoga County Democratic Party Chairwoman Shontel Brown bested progressive firebrand Nina Turner.

Here are five takeaways from the dual House primaries.

Carey won in a crowded field of about a dozen contenders based almost solely on Trump’s endorsement. Carey, a virtual unknown before winning the former president’s support in June, ultimately won by more than 20 points over his nearest competition.

A victory by Carey was sorely needed after Trump suffered a setback in a Texas special House runoff last week.

In that race, Susan Wright, who had the former president’s endorsement, lost to Jake Ellzey, another Republican who had the backing of the GOP establishment.

The loss set off a wave of questions about the power of Trump’s endorsement — one of his most critical political tools — and reportedly sparked recriminations within his inner circle.

In a sign Trump was eager to avoid back-to-back losses, his political groups made a $350,000 buy late last week on targeted text messages and digital and TV ads backing Carey.

While Trump’s endorsement was still hotly sought after by Republicans after Wright’s loss, Carey’s win will serve as a further reminder of the power of Trump’s backing and underscore his role as the de facto head of the GOP.

In his victory statement, Carey made sure to recognize Trump’s role in swaying the primary his way in a recognition of his influence among the party’s grassroots.

"Tonight, Republicans across Ohio’s 15th Congressional District sent a clear message to the nation that President Donald J. Trump is, without a doubt, the leader of our party. I could not be more grateful for his support, and I am proud to deliver this win to advance his America First agenda,” he said in a statement.

Several other figures besides Trump got involved in the 15th District’s GOP primary. Sen. Rand Paul (R-Ky.) marshaled his forces behind former state Rep. Ron Hood, while Steve Stivers , the Republican who retired from the House seat in May, backed state Rep. Jeff LaRe. State Sen. Bob Peterson didn’t get as many national endorsements but hinged his campaign on a flood of more local-based backers.

However, those candidates barely broke 13 percent of the vote each.

The results not only show that Trump is by far the most popular figure in the GOP but also that he may be the only one who can parachute into a race and single-handedly lift a candidate’s prospects.

Despite their profiles nationally and in the district, neither Paul nor Stivers was able to lift their chosen candidate to even a competitive level in the House race.

The results also underscore the strong position Trump is in should he decide to launch a third White House bid in 2024.

Several polls show he would be the overwhelming favorite to win the GOP nomination in three years if he runs again even as an avalanche of other Republicans — including Paul, who ran in 2016 — are eyed as potential presidential contenders.

Another show of strength from the Dem establishment

Brown defeated Turner in the 11th District, giving the establishment flank of the Democratic Party a major win in its proxy battle against progressives in Cleveland.

While polling was relatively scarce in the primary, Turner was initially seen as the front-runner given her high name ID and support from progressive powerhouse figures like Sen. Bernie Sanders (I-Vt.) and Rep. Alexandria Ocasio-Cortez (D-N.Y.).

Clyburn and the Congressional Black Caucus leadership traveled to Cleveland over the weekend to campaign on Brown’s behalf.

The Democratic congressman’s presence in the district was reminiscent of his involvement in last year’s Democratic presidential primary in South Carolina, where he galvanized support for then-candidate Joe Biden among the state’s Black voters.

Clyburn echoed Biden’s approach of compromise and moderation in an interview with CNN, drawing a contrast between Brown and Turner.

"We have to sit down, find common ground, reconcile the differences and move an agenda forward,” Clyburn told the network. “That's what this president is doing and that's why he's been so successful."

Brown’s victory in Cleveland follows a number of victories for the Democratic establishment over the past year in the Virginia Democratic gubernatorial primary, the New York City mayoral primary and special House elections in Louisiana’s 2nd District and New Mexico’s 1st District.

Progressive leaders like Sanders and Ocasio-Cortez descended on the district last month, while liberal groups like Our Revolution and Democracy for America also worked to flex their muscles on the ground.

But that support was not enough for Turner, who was up against the full force of the Democratic establishment. Turner conceded to Brown just after 10 p.m.

"Tonight, my friends, we have looked across the promised land, but for this campaign, on this night, we will not cross the river," Turner told her supporters from the stage.

Turner, who previously worked as a co-chair for Sanders’s 2020 presidential campaign, is considered a rising star on the left. She garnered national attention due to her high name ID and early support from progressive leadership.

However, her critics warned throughout the campaign that Turner’s nationwide name ID and support among progressives outside of the Buckeye State should not be seen as an indicator of success.

“Once again, the pundits and the Twitterverse got it wrong, and Democratic voters picked the moderate, Shontel Brown, over the candidate ordained by the far left,” said Matt Bennett, the executive vice president of Third Way, a center-left think tank.

“After moderates prevailing in primaries and delivering Nancy Pelosi the gavel in 2018, Joe Biden’s trouncing of Bernie Sanders in 2020, and the victories of Melanie Stansbury (NM-01), Troy Carter (LA-02), Eric Adams (NYC mayor), Terry McAuliffe (VA governor), and now Shontel Brown, it’s time that the political classes got the message: Democratic voters want bold, principled, pragmatic leaders who can beat Trump Republicans and work with the Biden team to deliver big things for America,” he added.

Cleveland served as a battleground for the national struggle between establishment and progressive Democrats, with Turner and Brown serving as the standard-bearers.

Many of Turner and Brown’s campaign priorities appeared to match up with those of the Biden administration, including a $15 federal minimum wage and making the child tax credit permanent. Additionally, Turner vocally supported "Medicare for All," while Brown’s campaign website says she will back a universal health care bill if it came to the House floor for a vote.

But the two candidates also often differed in their approaches to policy. When Clyburn endorsed Brown during an interview with The New York Times, he warned about the effect that slogans touted by progressives like “defund the police” could have on the party as a whole.

“What I try to do is demonstrate by precept and example how we are to proceed as a party,” Clyburn told the publication. “When I spoke out against sloganeering, like ‘Burn, baby, burn’ in the 1960s and ‘defund the police,’ which I think is cutting the throats of the party, I know exactly where my constituents are. They are against that, and I’m against that.”

Turner herself highlighted the divide within the party during her concession speech on Tuesday night.

“I am going to work hard to ensure that something like this doesn’t happen to another progressive candidate again. We didn't lose this race, evil money manipulated and maligned this election," she said.

Meanwhile, Sanders blasted the establishment’s involvement in the race over the weekend, pointing specifically to the outside money spent on Brown’s behalf.

"Why are they spending millions of dollars trying to defeat her?" Sanders told CNN. "The answer is obvious. They are afraid of her."

BERLIN — The center-left Social Democrats have won the biggest share of the vote in Germany’s national election, beating outgoing Chancellor Angela Merkel’s center-right Union bloc in a closely fought race. Election officials said early Monday that a count of all 299 constituencies showed the Social Democrats won 25.9% of...
ELECTIONS・21 HOURS AGO
The Hill

The House will vote Thursday on the Senate-passed bipartisan infrastructure bill, pushing back an originally planned vote for Monday that Democratic moderates had demanded as part of a deal with Speaker Nancy Pelosi (D-Calif.). Lawmakers will still debate the bill on the House floor on Monday, but the actual vote...
CONGRESS & COURTS・13 HOURS AGO
The Associated Press

JOPLIN, Mont. (AP) — Federal investigators are seeking the cause of an Amtrak train derailment near a switch on tracks in the middle of vast farmland in far northern Montana that killed three people and left seven hospitalized over the weekend. The westbound Empire Builder was traveling from Chicago to...
MONTANA STATE・9 HOURS AGO

San Diego — San Diego police are investigating the deaths of a woman and her 2-year-old son Saturday after they fell from the third level of Petco Park, just as thousands of baseball fans were heading inside for a Padres game, the San Diego Union-Tribune reported. The woman, 40, and the boy were pronounced dead at 4:11 p.m., about 20 minutes after police were alerted to the incident, Lt. Andra Brown told the newspaper.
SAN DIEGO, CA・2 HOURS AGO
CBS News

New York City schools have been temporarily blocked from enforcing a COVID-19 vaccine mandate for its teachers and other workers by a federal appeals judge just days before it was to take effect. The worker mandate for the the nation's largest school system was set to go into effect Monday....
NEW YORK CITY, NY・1 DAY AGO
The Hill

Democrats are facing a crucial week that could have big reverberations for President Biden ’s presidency, as they balance must-hit deadlines and the fate of the heart of their legislative agenda. Democrats are juggling three bills that would be massive fights on their own: An end-of-the-month government funding fight, a...
PRESIDENTIAL ELECTION・4 HOURS AGO
edgemedianetwork.com

Ivanka Trump is at the center of a social media storm after tweeting a photo of herself holding a can of Goya beans and writing the company's slogan, "If It's Goya, it has to be good" in both English and Spanish. The picture, which was also shared on President Donald...
POTUS・2020-07-15

Workers whose jobs put them at high risk of exposure to COVID-19 are now eligible for COVID-19 booster shots, according to the latest guidance from the the Food and Drug Administration and the Centers for Disease Control and Prevention. A third dose of the Pfizer-BioNTech COVID-19 vaccine is also now...
PUBLIC HEALTH・3 HOURS AGO
NBC News

Four bodies were hung in the heart of the Afghan city of Herat in a grim sign that the Taliban are reinstating its hard-line rule even as they are trying to project a more moderate image. Mulwi Shir Ahmad Ammar, the city's deputy governor, said the four men had kidnapped...
WORLD・1 DAY AGO