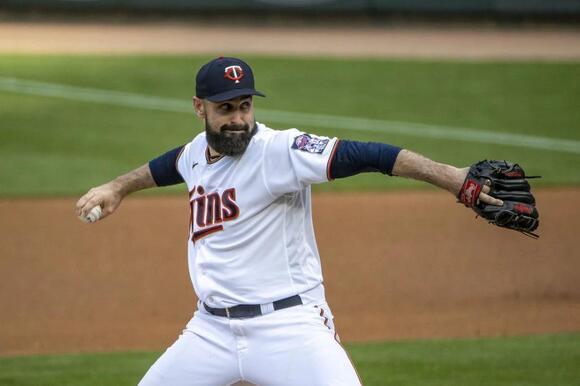 Shoemaker accepted an assignment with Triple-A Saint Paul after clearing waivers on July 5. He had given up just four runs in 20 innings since.

What is the fastest pitch in MLB? New York Yankees closer Aroldis Chapman can light up the radar gun like
NFL・1 DAY AGO
Sportsnaut

Who are the 10 greatest New York Yankees of all-time? While the apparatus of topics typically vary from post-game coverage
BRONX, NY・2 DAYS AGO
Sportsnaut

It’s now official. The Boston Celtics have announced that head coach Ime Udoka has been suspended for the entire 2022-23
BOSTON, MA・1 DAY AGO
Sportsnaut

Shohei Ohtani picked up his 14th victory of the season to go with his 90th RBI and Taylor Ward hit
MINNEAPOLIS, MN・12 HOURS AGO
Sportsnaut

The San Diego Padres are in the midst of their best season since 2010, but it won’t end with a
DENVER, CO・3 HOURS AGO
Sportsnaut

Merrill Kelly will attempt to continue his season-long domination of San Francisco hitters when the Arizona Diamondbacks face the Giants
SAN FRANCISCO, CA・4 HOURS AGO
Sportsnaut

Albert Pujols made history with two home runs to reach 700 for his career and the visiting St. Louis Cardinals
LOS ANGELES, CA・10 HOURS AGO
Sportsnaut

Two of the top rookie pitchers in the American League will square off on Saturday night when the Los Angeles
MINNEAPOLIS, MN・3 HOURS AGO
Sportsnaut

Before diving into the MLB games today rundown, here are the latest 2022 MLB standings. Our Sportsnaut’s MLB power rankings
MLB・1 DAY AGO
Sportsnaut

Now that Chris Bassitt has gotten the opportunity to impress his old fans with a brilliant pitching performance, the spotlight
QUEENS, NY・8 HOURS AGO
Sportsnaut

Albert Pujols returns to L.A. in quest for 700th homer

There could not be a better time for the St. Louis Cardinals to bring a pair of quests to Los
LOS ANGELES, CA・1 DAY AGO
Sportsnaut

Guardians look for spark from Will Brennan against Rangers

Considering all the contributions the Cleveland Guardians have gotten from their young players, it’s fitting that outfielder Will Brennan is
NEW YORK CITY, NY・4 HOURS AGO
Sportsnaut