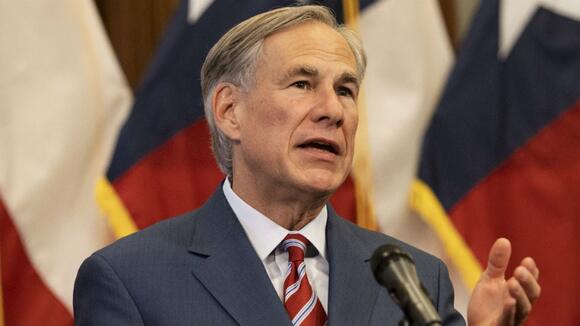 A federal judge on Tuesday temporarily blocked the Texas governor's executive order that directed state law enforcement to target suspected migrants, ruling that it will likely fail against a legal challenge from the Biden administration.

"The Executive Order causes irreparable injury to the United States and to individuals the United States is charged with protecting, jeopardizing the health and safety of non-citizens in federal custody, risking the safety of federal law enforcement personnel and their families, and exacerbating the spread of COVID-19," Cardone, a George W. Bush appointee, wrote.

Among other things, the order essentially prohibited the private transportation of groups of migrants and directed state troopers to pull over vehicles suspected of violating the rule, setting off widespread criticism from across the country.

The Justice Department sued the state on Friday, just two days after Abbott signed the order, and asked Cardone for an emergency temporary restraining order against state officials from enforcing it. The administration argued that the order is unconstitutional for interfering with the federal government's duties in immigration enforcement.

"No State may obstruct the Federal Government in the discharge of its constitutional responsibilities," the Justice Department wrote in its lawsuit. "But on July 28, 2021, the Governor of the State of Texas issued an executive order purporting—'effective immediately'—to restrict who may lawfully provide ground transportation in Texas to certain groups of migrants who have been detained by the Federal Government pursuant to U.S. immigration authorities or are otherwise subject to certain Federal authorities."

Abbott's office did not immediately respond when asked for comment.

Why can’t they counter that they are a danger to the citizens of the country during the Covid pandemic. They can prove that most of these people haven’t been tested. The federal government needs to be stopped. Period

LOCK THEM SUPERSPREADERS UP, WHILE CITIZENS need to be vaccinated to work, aliens can illegal cross the border and the GOVT. sends them UNVACCINATED and untracked Covid POSITIVE to a city near YOU.. CRIMINAL

A federal judge Wednesday rejected a request by parents of disabled children to block Gov. Ron DeSantis’ efforts to prevent school districts from requiring students to wear masks during the COVID-19 pandemic. Judge K. Michael Moore issued a 34-page ruling that denied a request for a preliminary injunction against an...
JACKSONVILLE, FL・10 DAYS AGO
kyma.com

(KYMA, KECY/ CNN) - The Justice Department asked a federal judge to issue a temporary restraining order to block enforcement of the controversial Texas Abortion Law. The law, which passed in May and went into effect earlier this month, bans abortions after six weeks of pregnancy. The legal brief comes...
TEXAS STATE・11 DAYS AGO
KRGV

"Federal judge will hear Texas' arguments against temporarily blocking abortion ban before ruling on DOJ request" was first published by The Texas Tribune, a nonprofit, nonpartisan media organization that informs Texans — and engages with them — about public policy, politics, government and statewide issues. Sign up for The Brief,...
TEXAS STATE・11 DAYS AGO
Insider

Abbott defended the state's decision to audit 2020 election results at Trump's request as Chris Wallace questioned whether it is a "terrible waste" of tax dollars.
TEXAS STATE・22 HOURS AGO

(CNN) — A federal judge blocked the Biden administration from expelling migrant families with children apprehended at the U.S.-Mexico border under a public health order, according to a Thursday ruling, marking a major defeat for the administration. In a long-awaited ruling, Judge Emmet Sullivan of the District of Columbia District...
CONGRESS & COURTS・10 DAYS AGO
Vice

First it was Border Patrol agents mounted on horseback. Now it’s prison buses. The federal Bureau of Prisons (BOP) has quietly dispatched “bus crews” from around the country to Del Rio, Texas, to help transport thousands of Haitian migrants who are camped underneath a bridge along the border, VICE News has learned, after speaking with multiple BOP employees who allege the agency has intentionally tried to avoid leaving a paper trail.
IMMIGRATION・2 DAYS AGO
ABCNY

Through the eyes of a 27-year-old man from Haiti, too afraid to share his identity, he says he lived in a town called Tapachula, Mexico before continuing the trek to Ciudad Acuna.
BROOKLYN, NY・3 DAYS AGO
siouxlandproud.com

DES MOINES, Iowa (AP/KCAU) — A federal judge has ordered the state of Iowa to immediately halt enforcement of a law passed in May that prevents school boards from ordering masks to be worn to help prevent the spread of COVID-19. Judge Robert Pratt said in an order signed Monday that the law substantially increases the risk of several children with health conditions of contracting COVID-19. Several parents with children that have various medical conditions sued the state.
IOWA STATE・13 DAYS AGO

Sept. 24 (UPI) -- Texas has announced it is conducting an audit of the 2020 general election in four counties. In a brief statement on Thursday, the office of the state's Republican attorney general, Kevin Paxton, said he has the authority to conduct "a full and comprehensive forensic audit of any election," which he has begun in Dallas, Harris, Tarrant and Collin counties.
TEXAS STATE・3 DAYS AGO
spectrumlocalnews.com

TEXAS — Texas law enforcement has issued a warning of a credible threat being made against several state legislators who voted in favor of Senate Bill 8, the state’s controversial abortion law. The Texas Department of Public Safety emailed a statement to an unknown number of House and Senate members...
TEXAS STATE・4 DAYS AGO
IBTimes

US Judge Blocks Use Of Covid Rules To Expel Migrant Families

CAPITAL REGION (WRGB) — New York state is getting pushed back on its COVID vaccine mandates. A federal judge in Utica is temporarily blocking the state from forcing medical workers to be vaccinated if they claim religious exemption. U.S. District Judge David Hurd in Utica issued the temporary order Tuesday...
U.S. POLITICS・12 DAYS AGO

A federal judge temporarily blocked the state of New York on Tuesday from requiring medical workers to be vaccinated after a group of health care workers sued, saying their constitutional rights were violated because the state's mandate disallowed religious exemptions. Judge David Hurd in Utica issued the order after 17...
UTICA, NY・12 DAYS AGO
mediaite.com

Chris Wallace repeatedly confronted Texas Governor Greg Abbott Sunday on whether he would support a rape and incest exception for the state’s abortion law. The seriously controversial law does not currently carve out those exceptions, and when Abbott was recently asked about that, he gave the rather stunning answer that “Texas will work tirelessly to make sure that we eliminate all rapists from the streets of Texas by aggressively going out and arresting them and prosecuting them and getting them off the streets.”
TEXAS STATE・21 HOURS AGO
Newsweek

Jarome Bell, running as an "America First" candidate in Virginia, made the statement after the Arizona audit results were announced.
PRESIDENTIAL ELECTION・16 HOURS AGO
The Guardian

Pennsylvania AG: Republicans are ‘willing to sell out 245+ years of American history’ for a Big Lie

We may have gotten the “results” from the fraudulent audit in Arizona, but that isn’t stopping states like Pennsylvania from expanding on the Big Lie and trying their hand at an illegitimate election turnover of their own. Pennsylvania Attorney General Josh Shapiro joins Ali Velshi to explain why he’s suing the Republicans spearheading the effort and why what they’re doing “confirms the sham.”Sept. 26, 2021.
PENNSYLVANIA STATE・22 HOURS AGO
CBS Denver

(CBS4) – Colorado Rep. Lauren Boebert announced on Friday, Sept. 24, she introduced articles of impeachment against President Joe Biden and Vice President Kamala Harris. She says the administration failed “to ensure the national security of the United States and its citizens” with regard to the U.S. military withdrawal from Afghanistan. The congresswoman, a Republican representing Colorado’s 3rd Congressional District, says she felt it her duty to introduce the articles due to what she describes as the president giving American-made weapons to and aiding enemies. She also accuses the administration of colluding with the Taliban. Lauren Boebert (credit: CBS) “And let me be...
COLORADO STATE・1 DAY AGO
El Paso Times

'You are free, you are home': Haitian migrants to be offered residency, permits by Mexico

CIUDAD ACUÑA, Coahuila — Acuña Deputy Mayor Felipe Basulto Corona made an offer to Haitian migrants huddled in a makeshift camp in a park near the Rio Grande. "The Mexican government is going to offer the opportunity to those who want to stay in Mexico to proceed with the legal residency and work permit procedures here," he told them Friday, if they vacate the park and move to a rented private building in Acuña being used by Mexican immigration authorities.
IMMIGRATION・1 DAY AGO
Newsweek

"Stacey, would you like to take his place?" Trump asked at a Georgia rally Saturday evening. "It's OK with me."
GEORGIA STATE・1 DAY AGO