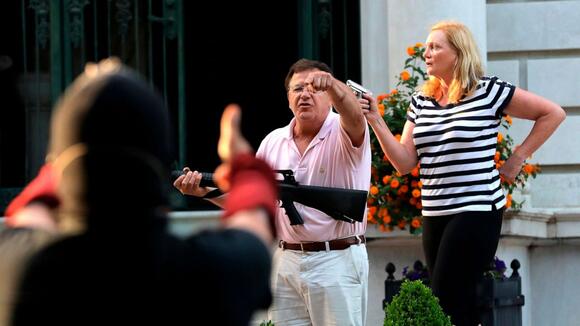 Missouri Gov. Mike Parson announced Tuesday that he had pardoned Mark and Patricia McCloskey, the St. Louis couple who were charged with waving guns at a group of Black Lives Matter protesters outside their home last year.

Mark McCloskey was seen holding a semi-automatic rifle while his wife was holding a handgun on their property on June 28, 2020, as a group of protesters passed by their house, prosecutors said. The couple were filmed shouting "Get out" to the crowd, but there was no physical confrontation between them and the protesters.

They contended they were protecting their property during the protests.

A grand jury indicted the couple in October and Pearson told reporters he would consider pardoning them.

The couple pleaded guilty to misdemeanor assault and harassment charges in June. They surrendered their weapons and Patricia McCloskey was fined $2,000 while her husband was fined $750.

When Judge David Mason asked Mark McCloskey if he acknowledged that his actions put people at risk of personal injury, McCloskey replied, "I sure did, your honor."

Mark McCloskey, who announced in May he was running for U.S. Senate, told reporters outside the courthouse after the hearing that he'd do it again.

"Any time the mob approaches me, I'll do what I can to put them in imminent threat of physical injury because that's what kept them from destroying my house and my family," he said.

The couple and the governor didn't immediately provide statements about the pardons.

Derek Chauvin was convicted of murder in the death of George Floyd, who he also used a neck restraint against.
PUBLIC SAFETY・5 HOURS AGO
The Hill

Twenty-four states threatened to sue the Biden administration on Thursday over the president's new rule to require employers with more than 100 employees to mandate vaccinations and frequent testing for their workers. A group of Republican state attorneys general sent a letter to President Biden vowing to take legal action...
U.S. POLITICS・1 HOUR AGO
The Associated Press

COLUMBIA, S.C. (AP) — Lawyer Alex Murdaugh surrendered Thursday to face insurance fraud and other charges after state police said he arranged to have himself shot in the head so that his son would get a $10 million life insurance payout. The shooter only grazed him. A defense attorney said...
HAMPTON COUNTY, SC・15 HOURS AGO

SACRAMENTO, Calif. (AP) — California Gov. Gavin Newsom handily defeated a recall election that could have removed him from office, but his Democratic allies in the Legislature already are seeking changes that could make it harder to mount such a challenge in the future. Those changes could include raising the...
CALIFORNIA STATE・16 HOURS AGO
NBC News

Olympic gold medalist Aly Raisman called for an independent investigation into the FBI and USA Gymnastics' handling of sexual abuse allegations against Larry Nassar, recounting on the "TODAY" how an FBI agent kept "diminishing" her reports of abuse after sharing similar stories in emotional testimony Wednesday. Raisman, 27, was one...
CELEBRITIES・8 HOURS AGO
ABC News

A 14-month probe into the Aurora, Colorado Police Department found the agency
AURORA, CO・5 HOURS AGO

SEOUL, South Korea — North Korea said Thursday it successfully launched ballistic missiles from a train for the first time and was continuing to bolster its defenses, after the two Koreas test-fired missiles hours apart in dueling displays of military might. Wednesday’s launches underscored a return of the tensions between...
MILITARY・11 HOURS AGO
Reuters

WASHINGTON, Sept 16 (Reuters) - An attorney who represented Hillary Clinton's 2016 presidential campaign was indicted on Thursday for lying to the FBI, as part of Special Counsel John Durham's ongoing probe into origins of the FBI's probe into ties between Russia and former President Donald Trump's campaign. Michael Sussmann,...
U.S. POLITICS・11 MINUTES AGO