Biden calls on Cuomo to resign after harassment probe 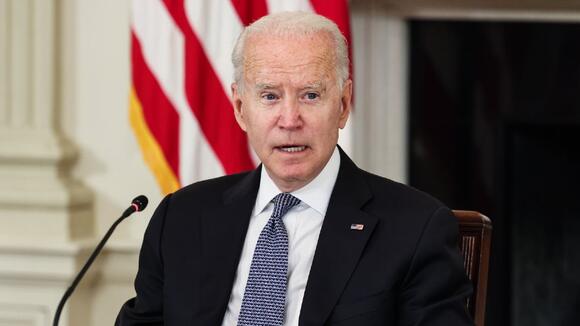 "I think he should resign," Biden told reporters.

"I'm sure there were some embraces that were totally innocent. But apparently, the attorney general decided there were things that weren't," he added when asked about Cuomo highlighting instances of Biden hugging others in his defense.

“Specifically, the investigation found that Gov. Andrew Cuomo sexually harassed current and former New York state employees by engaging in unwelcome and nonconsensual touching and making numerous offensive comments of a suggestive and sexual nature that created a hostile work environment for women," James said at a news conference detailing the findings.

James noted the report was a civil one, not one that would result in criminal referrals.

Biden joined scores of other Democrats, including Senate Majority Leader Charles Schumer (D-N.Y.), in calling for Cuomo to step down in light of James's findings.

Cuomo was defiant in a pre-recorded response to the investigation, denying wrongdoing and saying he would not resign.

“The facts are much different than what has been portrayed,” Cuomo said. At one point, photos of Cuomo hugging and kissing family members and state leaders played as the governor argued it showed he is an affectionate person who did not mean to make others uncomfortable.

New York Democrats have overwhelmingly called on Cuomo to step down. Sen. Kirsten Gillibrand (D-N.Y.), a strong advocate for sexual assault survivors, reiterated her call for Cuomo to resign in the wake of the attorney general's report, and Reps. Hakeem Jeffires (D-N.Y.), Gregory Meeks (D-N.Y.) and Tom Suozzi (D-N.Y.) joined the chorus of lawmakers urging the governor to step down as well.

Lt. Gov. Kathy Hochul (D), who would replace Cuomo if he resigned or were removed from office, called his behavior documented in the attorney general's report "repulsive and unlawful," but stopped short of calling for him to step down, citing her place in the line of succession.

Trump is gone. This shitshow belongs to biden. Spreading Covid all over the country with his open borders plan.

The Hill is trash! You know if they’re reporting this, there’s bigger news they’re distracting us from.

Hochul cuts off money for Cuomo aides' legal bills, what this could mean for Assembly probe

Former staffers to ex-Gov. Andrew Cuomo earlier this month were told by the new top counsel in Gov. Kathy Hochul's administration their legal bills would no longer be covered by the state, according to an email reviewed by Spectrum News 1. The email, sent by Hochul counsel Elizabeth Fine on...
POLITICS・1 DAY AGO
New York Post

ALBANY — New York State Inspector General Letizia Tagliafierro — a former aide to disgraced ex-Gov. Andrew Cuomo — resigned from her position Friday in the wake of a revived probe into the office’s past investigation of an illegal leak involving one-time Cuomo confidante Joe Percoco. “Yes, she has resigned....
POLITICS・4 DAYS AGO
CNBC

New York Attorney General Letitia James, whose sexual harassment report sunk Andrew Cuomo, is not ruling out a run for governor next year. James and her political advisors have been testing the waters to see whether she would have the backing of previous donors if she were to run for governor.
NEW YORK CITY, NY・6 DAYS AGO

Apple has quietly hired Andrew Cuomo’s former communications chief, who helped the disgraced ex-governor fight the allegations of sexual harassment that ultimately led to his downfall, The Post has learned. Peter Ajemian — who has been working for Apple’s communications team since at least early August — previously served as...
BUSINESS・7 DAYS AGO
Syracuse.com

Amid a flurry of machinations within state government, New York’s ethics commission voted overwhelmingly on Tuesday to seek a criminal investigation into the 2019 leak of confidential information to Gov. Andrew M. Cuomo. The vote of the Joint Commission on Public Ethics was 11-1, with one abstention, to give Attorney...
NEW YORK CITY, NY・7 DAYS AGO
New York Post

New York Attorney General Letitia James is calling for changes to the referral process for investigations after her office determined she could not probe an alleged leak to former Gov. Andrew Cuomo from the state's troubled ethics and lobbying regulator. The Joint Commission on Public Ethics, known as JCOPE, has...
NEW YORK CITY, NY・8 DAYS AGO

Alphonso David, former president of the Human Rights Campaign, defended his conduct in an interview after being fired from the organization over his connection to Andrew Cuomo’s sexual harassment scandal. When New York Attorney General Letitia James released her explosive report on Cuomo’s alleged conduct as New York governor, her...
PRESIDENTIAL ELECTION・9 DAYS AGO
timestelegram.com

U.S. Rep. Claudia Tenney, R-New Hartford, has called the country’s withdrawal from Afghanistan a debacle, laying the blame on President Joe Biden and his State Department. The first flight since U.S. military forces left the country Aug. 31 departed Kabul’s airport on Thursday, containing 200 Westerners. There still are families from New York’s 22nd Congressional District and nearby areas attempting to leave the country, which is now under Taliban control.
NEW HARTFORD, NY・9 DAYS AGO
101.5 WPDH

Do We Call Cuomo ‘Former Governor’ or ‘Ex Governor’ Now?

How do you address someone who left a political office in such unconventional terms?. Anyone else still in complete shock that he's gone?. It's hard to believe but it has been almost a month since Andrew Cuomo resigned as the 56th Governor of New York. The resignation was surprise to many New Yorkers. Most of us expected the resignation to come shortly after the Attorney General found he had harassed several women while in office but it came much later. Andrew Cuomo still denies the accusations.
NEW YORK CITY, NY・11 DAYS AGO
Fox News

Retired Army Captain Meaghan Mobbs is fighting back against the Biden administration, refusing the request to step down from her position on the military academy advisory board after President Biden asked multiple Trump-appointed members to resign. Biden is now facing backlash from multiple members of the board, including Kellyanne Conway...
PRESIDENTIAL ELECTION・13 DAYS AGO

Watchdog groups filed a complaint Thursday against a top aide to former Gov. Andrew Cuomo, alleging he is currently paying the adviser with campaign dollars, in violation of state election law. The complaint , led by Common Cause New York and joined by government accountability group Reinvent Albany and two...
POLITICS・12 DAYS AGO
Times-Herald

ALBANY (TNS) — Gov. Kathy Hochul is leaving the door open for a potential investigation into how former Gov. Andrew M. Cuomo is spending roughly $18 million of campaign cash after he resigned from office in the wake of an investigation that found he sexually harassed multiple women. ”As part...
POLITICS・12 DAYS AGO
audacy.com

NEW YORK (WCBS 880) — Government watchdog groups are calling for an investigation into former Gov. Andrew Cuomo's alleged use of campaign funds, despite not currently holding office and having no plans to run for office. Cuomo built up most of his $18 million campaign accounts in the hopes of...
NEW YORK CITY, NY・12 DAYS AGO
New York Post

Gov. Kathy Hochul is being pressured by lawmakers and watchdog groups to fill at least two immediate vacancies on the state’s ethics board, as it considers whether to go forward with a probe of ex-Gov. Andrew Cuomo — and possibly revoking approval for his $5.1 million book deal. The Joint...
NEW YORK CITY, NY・12 DAYS AGO
Fox News

New York State Attorney General Letitia James has issued a subpoena to the Joint Commission on Public Ethics in its investigation into disgraced former Gov. Andrew Cuomo's $5.1million book deal. The probe centers on whether Cuomo improperly used state resources when he recruited his staff to work on the book,...
POLITICS・14 DAYS AGO
Lockport Union-Sun

ALBANY — Up until a month ago, New York and California were both big states with governors in deep political hot water. But with Andrew Cuomo having resigned on his own as New York's chief executive Aug. 24, a major difference in how the two states can deal with issues relating to competency in public office is now in focus: Californians have the power to recall leaders at the ballot box, while New Yorkers do not.
ALBANY, NY・13 DAYS AGO
wabcradio.com

New York, NY (77WABC)-State Senator Brian A. Benjamin is officially, as of today, sworn in as New York State’s new Lt. Governor. NY Governor Kathy Hochul appointed Benjamin to the post on August 26th, 2021. The location for today’s swearing ceremony is the Governor’s Manhattan office on Third Ave. In...
MANHATTAN, NY・13 DAYS AGO