Packers' GM Admits Who Pulled Trigger On Trade With Texans 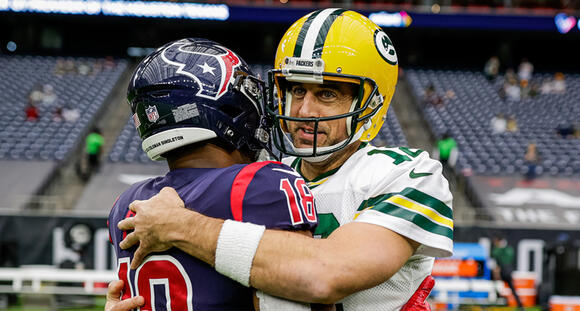 The story of how the Green Bay Packers went on the offensive to lure back reigning NFL MVP Aaron Rodgers won't soon be forgotten.

A vital tactic for Green Bay was to appease Rodgers by giving him power in personnel moves. The quarterback's first desire? Re-acquiring long-time Packers wide receiver Randall Cobb from the Houston Texans.

Packers general manager Brian Gutekunst all but admitted that the trade for Cobb last week was entirely driven by Rodgers' wishes.

"I think that’s a big part of it, I don’t think without Aaron we would be pursuing him," Gutekunst said via Rob Demovsky. "This was a very important thing for Aaron and that’s why we did it."

So it's simple; What Rodgers wants, Rodgers gets.

This may not reflect well on Gutekunst, who has come out of this looking 50 shades of desperate. But ultimately while his tail may be between his legs, he got what he wanted: Rodgers is back.

From a Texans perspective, this move was exactly what the doctor ordered. They got one of their worst contracts off the books, freeing up Cobb's $10.4 million cap hit by only having to pay $3 million this year.

In exchange, they also received a sixth-round pick, which for a receiver on the wrong side of 30 who missed much of last season injured, is a solid result.

To replace Cobb, the Texans traded for 26-year-old slot receiver Anthony Miller from the Chicago Bears.

A speedster who is still on his rookie contract, the Texans get a younger player in Miller who will cost them just $1.2 million this year. He had similar production to Cobb last year. The Texans parted ways with a fifth-round pick for Miller, who came packaged with a Bears' seventh-round pick.

So now that the details of these transactions have been fully revealed, everybody won. The Bears landed a draft pick. The Texans freed-up cap space. Defacto general manager Rodgers got his coveted target. And Gutekunst, sheepishly, got his quarterback.

Okay, perhaps some won more than others.

bad move on management's part. wher do they stop? Rodgers has said he wants th GM gone will they give in on that? he wasn't happy with Leflore's play calling the last game will he want him gone? sorry but he's an employee not management. should have been told to honor his contract.

Aaron Rodgers has no qualms about spending some time away from fiancée Shailene Woodley during the upcoming 2021 NFL season. The Green Bay Packers quarterback got candid about his whirlwind relationship with the "Big Little Lies" actress and how the two will spend the coming months focusing on their respective careers.
NFL・17 DAYS AGO
NBC Sports

The Jordan Love era is underway. Love, the Packers’ 2020 first-round draft pick and heir apparent to franchise quarterback Aaron Rodgers, saw his first regular-season game action in the fourth quarter today as Rodgers was pulled during a disastrous game against the Saints. Rodgers had completed 15 of 28 passes...
NFL・7 DAYS AGO
enstarz.com

Aaron Rodgers 'Betrayed' By 'Jeopardy!'? NFL Star Thinks He Was 'Used' For the Ratings [DETAILS]

Aaron Rodgers feels betrayed by "Jeopardy!" An insider told OK! magazine that the Green Bay Packers superstar is extremely upset for missing out on the chance to become the next permanent host of "Jeopardy!" Recently, it was announced that the show's executive producer Mike Richards would be hosting, with Mayim...
NFL・24 DAYS AGO
AOL Corp

Packers Release Another One Of Aaron Rodgers’ Favorites

The Green Bay Packers released tight end Bronson Kaufusi this afternoon, despite the fact Aaron Rodgers praised the BYU product recently. We’ve seen the Packers get rid of guys Rodgers likes before, and their release of wide receiver Jake Kumerow in 2020 is the biggest example. Rodgers told people he thought Kumerow was Green Bay’s second-best wideout in camp, and his disapproval of the move contributed to the star quarterback’s discontent with the organization this offseason.
NFL・19 DAYS AGO

Tom Brady made headlines earlier this month when he called out the NFL’s product. The seven-time Super Bowl champion said the quarterback position is being taught the wrong way because every hard hit from a defensive player ends up being a penalty. “A quarterback should only throw the ball to...
NFL・8 DAYS AGO
On3.com

The Green Bay Packers are bringing back a surprise cut from yesterday. Today, NFL Network’s Tom Pelissero announced that the Packers have re-signed quarterback Kurt Benkert to their practice squad. Originally, Pelissero mentioned that the Packers planned to bring Benkert back if he wasn’t claimed. Luckily, the former Virginia quarterback...
NFL・18 DAYS AGO
CBS Sports

Aaron Rodgers insists he never intended to cause any distractions to the Packers' 2021 season by staying away from the team and playing coy about his future in Green Bay for most of this offseason. But if anyone looked distracted, or at least unprepared, in Sunday's Week 1 games, it was Rodgers and the Packers -- so much so that coach Matt LaFleur sent Rodgers to the bench with just under 11 minutes left in the club's road opener against the Saints, replacing the reigning MVP with second-year backup Jordan Love after Jameis Winston torched the Packers' defense for five touchdown passes en route to a 38-3 blowout win.
NFL・7 DAYS AGO
ClutchPoints

Aaron Rodgers admits Packers got kicked in the nuts vs. Saints

Aaron Rodgers and the Green Bay Packers got absolutely demolished by the New Orleans Saints 38 – 3, in their opening game of the season. After the game, the Packers star quarterback compared the loss to another painful sensation. Rodgers said their loss was a “kick in the you-know-what” for...
NFL・7 DAYS AGO

Aaron Rodgers admitted Sunday he "100%" considered retiring from the NFL amid the drama swirling around his relationship with the Green Bay Packers in the offseason. Rodgers appeared in an interview with FOX’s Erin Andrews on the "FOX NFL Sunday" pregame show and talked about the offseason. The 2020 NFL MVP told Andrews he wasn’t intentionally trying to create drama in the offseason when the trade rumors were swirling but definitely believed a trade was possible.
NFL・7 DAYS AGO
FanSided

When will the Packers consider trading Aaron Rodgers in-season?

After an offseason filled with uncertainty over his future combined with a 38-3 opening loss, QB Aaron Rodgers days with the Green Bay Packers are quickly ticking down. It’s safe to say that Green Bay Packers last game of the 2020-21 season was initially expected to be QB Aaron Rodgers final game with the team. It was a drama-filled offseason where the entire NFL was left wondering if it would be Rodgers or Jordan Love leading the offense.
NFL・2 DAYS AGO
CalSportsReport

The Saints cut ties Tuesday with running back Latavius Murray after he refused to take a pay cut. On Wednesday, we learned why the team was still looking to free up salary cap space just days before their season opener. New Orleans is acquiring cornerback ﻿Bradley Roby﻿ in a trade...
NFL・11 DAYS AGO
chatsports.com

Packers lay an egg in opener: Who is to blame?

In the near-48 hours since the conclusion of the Green Bay Packers’ game against New Orleans on Sunday, I keep thinking that the loss the Packers suffered was some type of dream. A bad nightmare, more like it. That surely could not have been the Green Bay Packers that I...
NFL・5 DAYS AGO
USA TODAY Sports Media Group

The Green Bay Packers attempted to add help for Joe Barry’s defense via trade this week. According to Jonathan Jones of CBS Sports, the Packers made calls this week about a trade for a linebacker but were unable to find a match. Jones didn’t specify whether the calls were about...
NFL・1 DAY AGO
SaintsNewsNetwork

Jameis Winston had a spectacular debut as the New Orleans starting quarterback. Will Winston follow that up with another strong performance against division rival Carolina?
NFL・2 DAYS AGO
Sports Illustrated

A betting breakdown of the Week 2 Monday Night Football matchup between the Detroit Lions and Green Bay Packers.
NFL・2 HOURS AGO
USA TODAY

The Green Bay Packers have decided to temporarily shut down star linebacker Za'Darius Smith in hopes he can more fully recover from a back injury.
NFL・2 DAYS AGO
SaintsNewsNetwork