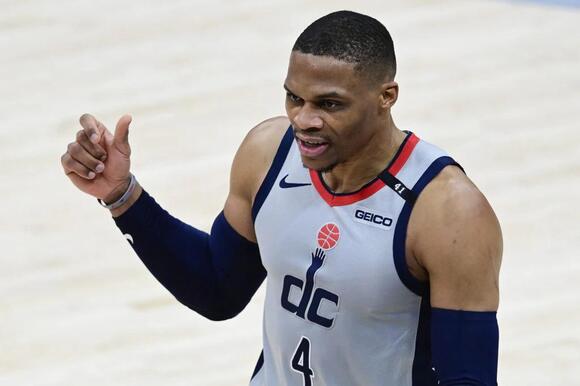 The Russell Westbrook trade from the Washington Wizards to the Los Angeles Lakers last week came together pretty quickly .

Apparently, there’s a reason for this. The former NBA MVP had been discussing a potential move to Southern California with Lakers stars LeBron James and Anthony Davis for some time now. The idea was to build a super team in Los Angeles after an ugly first-round exit in the 2021 NBA Playoffs.

All the while, Russell Westbrook and his Wizards team was also coming off a first-round exit at the hands of the Philadelphia 76ers . Teaming up with star Bradley Beal, Russ seemingly returned to earlier-career form by averaging a triple-double.

Even then, it became apparent that the fit in D.C. was not going to work long-term. Westbrook’s push to be moved from the nation’s capital out west added another layer to this. Behind the scenes, Wizards and Washington Capitals owner Ted Leonsis was working on a new deal for NHL star Alexander Ovechkin.

In talking about the two situations, the embattled Wizards owner took time out of his day to absolutely blast Russ and other NBA players. It was not subtle, either. 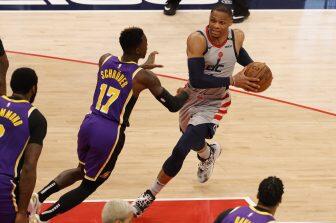 With the Capitals since all the way back in 2005, Ovechkin has morphed into one of the greatest NHL players of all-time. He went through ups and downs with the organization, but always stayed loyal. That was rewarded with a five-year, $47.5 million extension last week . The backdrop here was Westbrook seemingly requesting to be traded to the Lakers.

Is the Wizards’ owner right in blasting Russell Westbrook?

There’s a few different layers to this. Westbrook played with the Thunder for 11 full seasons before being moved to the Houston Rockets ahead of the 2019-20 season.

It became apparent in his one year with Houston that a relationship with James Harden was not going to work. The former NBA MVP then asked out, and was ultimately traded to Washington in exchange for another bloated contract in that of John Wall.

The Wizards were desperate to move off the injury-plagued Wall . Meanwhile, no trade market took place for Westbrook at the time. In the end, an awkward union between Washington and the future Hall of Fame guard took hold. 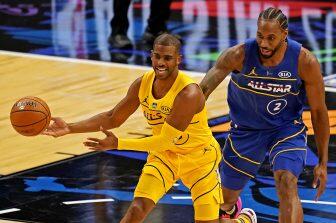 Perhaps, Leonsis is being a bit shortsighted here.

Ted needs to stop crying and complaining. He's had ample time to build a contender with the Wizards but chose to focus on the Capitals. If he was serious about Championship basketball he would have fired Ernie Grunfeld sooner.

Russell Westbrook has stirred up some controversy on the internet once again. Last time it was because it was announced he’d be joining the already stacked Los Angeles Lakers as the West Coast team looks to nab its second championship in 3 seasons, but now it’s got to do with his latest outfit. View this […]
NBA・8 DAYS AGO
Lakers Daily

Russell Westbrook goes all out for Met Gala with new hairdo

Los Angeles Lakers superstar Russell Westbrook went all out for the Met Gala with a new hairdo. Westbrook is sporting stars in his hair. The theme of the event is “American Independence.”. The Lakers acquired Westbrook this offseason in a deal that sent Kyle Kuzma, Kentavious Caldwell-Pope and Montrezl Harrell...
NBA・7 DAYS AGO
fadeawayworld.net

Russell Westbrook is an absolute beast on the court, and there are few who can compare to his energy and passion. Russ is also known for his rather flashy fashion choices. Over the years, Westbrook has made countless headlines for his crazy, wacky, and intriguing attire. Recently, Westbrook captivated audiences...
NBA・9 DAYS AGO
fadeawayworld.net

With Russell Westbrook securing a move to the Los Angeles Lakers, fans have increasingly high expectations of him. For years, Westbrook has been a standout in the league as a solo act. With a solid team around him, surrounded by superstars like LeBron James and Anthony Davis, Westbrook is expected...
NBA・14 DAYS AGO

Russell Westbrook will be playing with the Los Angeles Lakers this season and fans cannot wait to see what he is going to do out on the court. He is still looking for that first championship and there is no doubt that this team gives him his absolute best shot at glory. With the season just a month away, fans are looking forward to seeing him in that purple and gold jersey, however, last night, Westbrook made waves for another fashion choice.
NBA・8 DAYS AGO
Larry Brown Sports

Russell Westbrook’s fashion choice that involved a skirt did not sit well with Kwame Brown. Brown recently received renewed attention after ripping into Matt Barnes and Stephen Jackson. Next up on Brown’s target list was Stephen A. Smith. And now Brown is taking aim at Westbrook. Brown ranted over Westbrook...
NBA・7 DAYS AGO
ClutchPoints

Los Angeles Lakers star Anthony Davis tied the knot on Saturday, marrying his fiancée who is known only as Marlen P. Davis’ former teammate Tim Frazier posted images of Davis’ rehearsal dinner on his Instagram along with a few videos on his story, including one of Davis serenading his now-wife.
NBA・2 DAYS AGO
fadeawayworld.net

The Met Gala 2021 just took place this evening, and a who's who of guests attended the vent. The annual event, which is held by New York's Museum of Metropolitan Art, hosts a collection of some of the biggest names in the world. The event is known for major celebrities...
NBA・7 DAYS AGO

The ratings for NBA 2K22 are not a popularity process. It goes in-depth and looks at a wide array of data. Overall ratings take into account passing accuracy, durability, free throw percentage, ability to draw fouls, shooting from outside, and many more stats. It’s been said that the developers look at up to 50 such attributes to paint a complete picture of the player.
NBA・14 DAYS AGO
lakers365.com

Russell Westbrook joined forces with LeBron James and Anthony Davis this summer on the Los Angeles Lakers, giving him a legitimate chance to win an NBA title. By no surprise, Russ isn't taking that opportunity for granted and is making sure to put in serious work as he gets ready for the 2021/22 campaign: Absolute aggression from Westbrook. He was also seen training with Bron earlier this summer.
NBA・14 DAYS AGO
silverscreenandroll.com

Russell Westbrook’s mythos will be the Lakers’ lifeblood, for better or worse

If you closed your eyes, you could probably paint the picture if tasked. It’s a Tuesday, or maybe a Wednesday. The Lakers are down, they’re on the road, their energy is sapped. Although the incoming loss is not ideal, it’s a reasonable letdown effort in the grand scheme of things, considering the team is in the middle of a brutal stretch where the games seem to never stop. These types of defeats simply transpire during the doldrums of a long season.
NBA・13 DAYS AGO
fadeawayworld.net

'Sway' Shares What Russell Westbrook Has Been Up To Lately

Russell Westbrook is one of the biggest characters in the NBA. That goes without saying at this point. Besides his electric style of play, competitive nature, and freakish athleticism, Westbrook is also... Well, pretty active off the court. Russell is a philanthropist and activist. He's always giving back to his...
NBA・2 DAYS AGO

The Los Angeles Lakers made sure to bring home a couple of players during their offseason, with the most notable one being Russell Westbrook. The Lakers were able to quickly cobble up a trade to land Westbrook from the Washington Wizards in the summer’s first blockbuster move, tilting the NBA Finals odds in their favor. Westbrook is a homegrown talent who grew up cheering for the Purple and Gold and now gets an opportunity to chase a title with the iconic franchise.
NBA・13 DAYS AGO
Lakers Daily

Los Angeles Lakers superstars LeBron James and Russell Westbrook were recently featured in the music video for Nas’ song “Brunch on Sundays.”. James and Westbrook can be seen sitting at a table at the beginning of the music video in a brunch setting. Having high-profile athletes such as James and...
NBA・6 DAYS AGO
Yardbarker

Despite their best efforts, the Los Angeles Lakers came up short in their attempt to repeat as NBA Champions, getting sent home by a younger and inexperienced Suns team in the very first round. In response to the failure, Lakers GM and President Rob Pelinka set out on a mission...
NBA・10 DAYS AGO
Yardbarker

Kyle Kuzma was traded to the Wizards as part of the Russell Westbrook trade. though the forward believed he was headed to Sacramento. Shortly before the Westbrook deal was announced, it was reported that the Kings were closing in a deal that would have sent Buddy Hield to the Lakers in exchange for Kuzma, Kentavious Caldwell-Pope, and Montrezl Harrell.
NBA・14 DAYS AGO

Russell Westbrook is known for making a statement on the basketball court. Now he’s taking that same attitude to the fashion world. Basketball and fashion have long gone hand-in-hand, with players from the NBA being at the forefront of trends. It seems Russell Westbrook is taking a leaf out of Dennis Rodman’s book and pushing the boat out with his latest look.
NBA・8 DAYS AGO
AllLakers

The Lakers spent the last two seasons looking for a capable point guard to pair with LeBron James and Anthony Davis. Rajon Rondo was an integral part in helping the Lakers win No. 17 in the bubble two seasons ago. Then Rob Pelinka and the Lakers got aggressive and decided to acquire Dennis Schroder—runner-up for the Sixth Man of the Year award with the Thunder—a younger, more explosive point guard.
NBA・8 DAYS AGO
fadeawayworld.net

Russell Westbrook is a great player, there are no two ways to look at it. He is a former NBA MVP and is a triple-double machine. Since leaving the Oklahoma City Thunder, Russ' contributions have been going under the radar for most. Even NBA 2K22 may have overlooked Westbrook's performances...
NBA・6 DAYS AGO
ClutchPoints

Los Angeles Lakers big man Anthony Davis’ performance last season was disappointing, at least based on his standards. He missed exactly 40 games in the regular season due to an Achilles and calf injury. On top of this, he produced the lowest points (21.8) and rebounds (7.9) per game since his sophomore year in the league. He only scored 30 points or more just six times in the regular season—a far cry from the season prior when he did it 21 times. This will, shortly, actually bring us to Russell Westbrook.
NBA・12 DAYS AGO