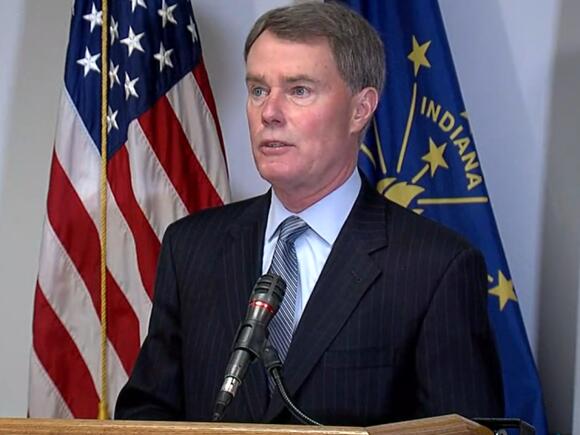 INDIANAPOLIS — In a city where homicides are on pace to break another tragic record, Mayor Joe Hogsett’s administration has invested millions of dollars into programs, technology and other initiatiaves aimed at reducing violence.

Hogsett has launched a series of reforms to policing in the city, along with providing grants to community groups and funding to public safety programs outside of law-enforcement.

Some of the changes came in response to demonstrations in the summer of 2020 that drew thousands to the streets to protest police killings of Black men and women in Indianapolis and across the country.

Hogsett promised to unveil new violence-reduction efforts this month when his office proposes a 2022 budget, which includes an unprecedented $400 million from the federal American Rescue Plan.

“When the budget gets presented there’s going to be a robust discussion about public safety," Hogsett said. "I think that everyone on the council, Republicans and Democrats alike, understand that gun violence, and public safety, generally, is the city's top priority right now."

Here are some of the major efforts Hogsett has launched aimed at curbing violence and renewing confidence in policing:

Civilian oversight: Hogsett launched a host of updates to IMPD policies in 2020, the biggest change being a new civilian-led Use of Force board with authority to review any incident in which an officer uses a firearm, Taser or physical force. The panel includes five civilians and four police officers.

IMPD body cameras : After years of debate and handwringing over the costs, in August 2020 Hogsett finally found the money to equip Indianapolis officers with body cameras. The department has since released video in eight “critical incidents,” including an incident in May 2021 in which officers fatally shot a man who was armed and reported to be suicidal.

Bans on aggressive tactics : In the summer of 2020, IMPD banned controversial police practices including chokeholds, no-knock warrants and the practice of shooting into or from moving vehicles.

De-escalation tactics: Last year the department rewrote its use-of-force policy and required officers to first try de-escalation techniques when feasible to calm tense situations before they use force.

Grants to grassroots groups: Hogestt’s administration gave $2.2 million in grants to 26 community groups working to reduce violence in Indianapolis in 2021 . The grants are administered by the Central Indiana Community Foundation. The money went to a range of groups that are working on prisoner reentry, removing guns from the streets, mentoring the city’s youth and other programs.

More grants: The City-County Council is awarding $1.3 million to dozens more community organizations in 2021. The council and CICF awarded the first round of these grants in June to about 40 groups. The city's Office of Public Health and Safety funds another grant program that has awarded more than $700,000 over two years.

Technology to fight crime: City leaders this month approved a plan to invest $1.5 million in software, storage and employees to help IMPD map crime trends to specific blocks or even properties. Using this information, Hogsett's office said IMPD will focus officers, social services and other resources on the specific areas with the most dire crime problems. IMPD is also using this money on software to better track racial equity and provide an early warning on officers who may be on track to use excessive force or otherwise deviate from department policy.

Domestic violence and mental health resources: The same plan that improved crime-fighting technology included another $1.8 million to fund programs outside of IMPD that include hiring advocates to work with domestic violence victims, supporting groups that help juveniles overcome trauma and other mental health problems, bringing mental health professionals into the 911 dispatch system and bringing staff to the Assessment and Intervention Center, which helps identify and divert low-level drug offenders into treatment programs.

$400 million dollars our children have to pay back about to go down the tubes on another plan. since I became capable of putting the larger world in context some 50 years ago I have watched plan after plan after plan implemented that NEVER actually addresses the core issues at the root of the problem. Oh please please tell honorable Joe hoggsett the plan that you have that is going to fix a rotted out core of values that you and your ilk have created ( we r now 3 generations in). by killing incentives for self improvement. taking away personal accountability, telling an entire race that the majority race systemically keeps them down. How do u people get up in the morning and look at yourselves in the mirror. you are crimes against humanity and worst of all the human spirit

Without even reading this article, I could have told you his solution would be to throw tax money at the problem. That's the Democrat response to EVERY issue!

he isn't going to do anything but hide and watch he needs out of office worst mayor ever.....

A man was found shot to death early Tuesday in an apartment complex in Indianapolis' Irvington neighborhood, police say.
INDIANAPOLIS, IN・7 HOURS AGO
WRTV

Woman shot, carjacked at gas station on Indy's southwest side

A woman was shot in a suspected carjacking early Tuesday on Indianapolis' southwest side, police say.
INDIANAPOLIS, IN・8 HOURS AGO
WRTV

A former Carmel police officer accused of harassment against a candidate for Clay County Sheriff and a special prosecutor have reached a pretrial diversion agreement.
CARMEL, IN・2 HOURS AGO
WRTV

Hurricane Ian flooded vehicles will soon be sold in Indiana

Cars and trucks flooded by Hurricane Ian will soon be cleaned up and sold in Indiana and other states, to unsuspecting car buyers.
INDIANAPOLIS, IN・7 HOURS AGO

Police are investigating after they found a man dead while conducting a welfare check on the city's north side.
INDIANAPOLIS, IN・1 DAY AGO
WRTV

Police are asking for the public's help finding a missing 24-year-old man last seen two days ago on the city's northwest side.
INDIANAPOLIS, IN・1 DAY AGO
WRTV

Working Remote: How the pandemic changed the labor landscape

We take a deeper dive into what remote work looks like after the pandemic. Plus, the city in Indiana working to attract remote workers from around the world to live and play in their community.
BLOOMINGTON, IN・9 HOURS AGO
WRTV

1 killed, 2 wounded after shooting inside barbershop on Indianapolis' east side

Three people were shot, one fatally, Friday afternoon in the city's Near Eastside neighborhood, police say.
INDIANAPOLIS, IN・4 DAYS AGO

A federal judge has ruled in favor of Roncalli High School and the Archdiocese of Indianapolis years after a former guidance counselor filed a federal lawsuit against both parties.
INDIANAPOLIS, IN・3 DAYS AGO
WRTV

Earlier this month, Brandy Chestnut and Steven Taylor discovered their storage unit at SecurCare Self Storage had been broken into.
MARION COUNTY, IN・4 DAYS AGO
WRTV

The caller claimed that they were from Duke Energy and said Hall needed to pay his bill immediately or that they were going to shut his energy off.
HAMILTON COUNTY, IN・21 HOURS AGO
WRTV

The 76th Irvington Halloween Festival kicks off officially at the end of the month, but ahead of time, the buzz in the neighborhood has already set in.
INDIANAPOLIS, IN・20 HOURS AGO

A man convicted in the 2019 death of his pregnant girlfriend and her two unborn children will serve 30 years in prison with 10 years suspended.
MADISON COUNTY, IN・38 MINUTES AGO
WRTV

Relaxed requirements allowed half a million Hoosiers to sign up for Medicaid in 2020, but now they may need to provide additional documentation to keep those benefits.
INDIANAPOLIS, IN・2 DAYS AGO
WRTV

Meet the first female head of the Mexican Consulate in Indiana

Leticia Maki Teramoto is the first woman to lead the Mexican Consulate in Indiana. It's a big task, spanning three states and she shares with WRTV that she's ready to tackle the job.
INDIANAPOLIS, IN・5 DAYS AGO
WRTV

Over the weekend, LEAP, Riley Hospital for Children and wagon builders came together to build Avery a new wagon. It was delivered Monday.
COLUMBUS, IN・1 DAY AGO

Have you ever thought about what happens to your social media once you pass away? Well, the Indiana Attorney General’s office wants you to start thinking about it.
INDIANA STATE・4 DAYS AGO
WRTV

The flu shots available are high dose, egg-free, flu mist and quadrivalent options. Clinics are being held in various locations throughout the month across Central Indiana.
INDIANAPOLIS, IN・3 DAYS AGO
WRTV

INDOT announced a major investment to build more electric vehicle charging stations and it happens to come at a time when gas prices are rising.
INDIANA STATE・5 DAYS AGO
WRTV

Bloodhounds from across the country training in Hamilton County

The Hamilton County Sheriff's Office is training their K-9's and others from across the Country. The department has set up various training exercises for both the dogs and their handlers.
HAMILTON COUNTY, IN・5 DAYS AGO