Remember Keenen Ivory Wayans? He & His Ex-wife Have 5 Grown-Up Kids Who Look Like Their Parents

The former couple was married only for three years, but their relationship lasted almost 15. From the famous Wayans family of entertainers, Keenen met Daphne when she was still 16, and he was 28.

However, they started dating two years later when she reached her legal age, and their relationship lasted at least 15 years.

THEIR MARRIAGE AND KIDS

By the time they tied the knot officially in 2001, they already had three of their five children: their son, Keenen Ivory Jr, daughters Jolie and Nala. That same year, they welcomed Bella Ivory, and in 2003, they had their last daughter, Daphne.

Daphne and Keenen divorced in 2004, but they manage to remain good friends to this day. After Daphne joined the cast of “Hollywood Exes,” many people started to question the reasons for their divorce.

However, she explained in an interview with MadameNoire that there was not a particular reason for their split:

"There’s not any one reason why we decided. I don’t like to call it a split or divorce because we were still together. It was more of a shift, a change in structure."

She also revealed that they live five houses apart, and while they are not husband and wife, they still operate as a family. She added:

"In the legal world, the paper seals the deal, but in the real world, there’s still a lot there. " 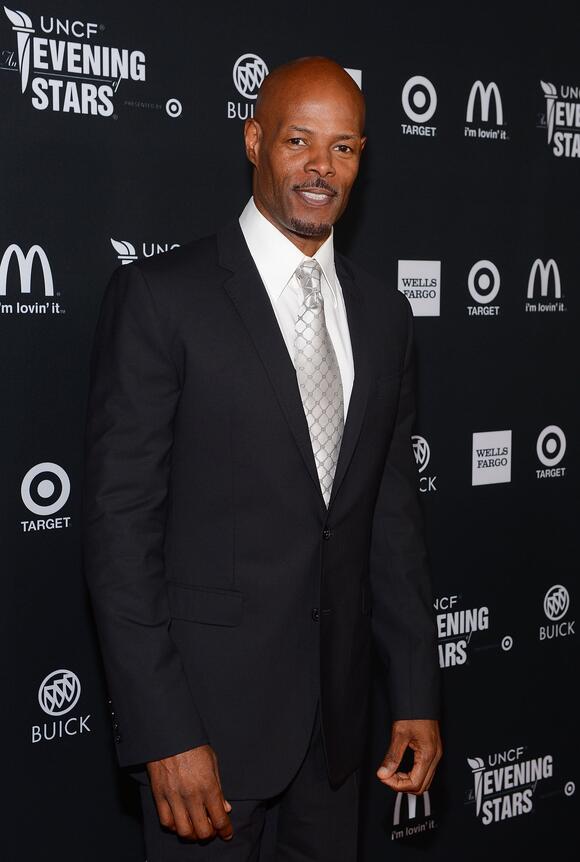 As for the kids, Jolie, the eldest, prefers to live her life away from the spotlight, and there’s little known about her. Keenen Jr., on the other hand, seems to be following his father’s steps into the stand-up comedy world.

Nala vlogs her experiences, travels, and day-to-day routines. She signed a modeling contract with DT Model Management and was also a co-host of the reality show “The Guest House.”

Her little sisters, Bella and Daphne, are still in high school and focusing on graduating before anything else.

When Nala walked the Sherri Hill runway in 2018 at NYFW for her modeling debut, her dad made sure to surprise her with a bouquet of red roses.

She was not the only celebrity kid to walk the show as Corinne Foxx, Jamie Foxx's daughter, was also on the runway.

Keenen's mother, Elvira Alethia Wayans, was a social worker married to Howell Stouten Wayans, a supermarket manager. She passed away in July 2020 at the age of 81.

Before her death, Elvira was a mother to ten children and many grandchildren. At the time of her death, one of her sons, Marlon, took to his Instagram to share the news.

The actor opened up about his loss weeks after her passing on July 23, 2020, because it was his 48th birthday and would have been his mother's 82nd birthday.

Of her ten children, grandchildren, and in-laws she left behind, most of them work in the entertainment industry.

Gordon Ramsay’s Kids: Everything To Know About His 5 Children, Including His Look-A-Like Son

Gordon Ramsay and his wife Cayetana’ Tana’ Hutcheson are the proud parents of five children, including Megan, Jack, Holly, Matilda, and Oscar. Find out more about them here. Gordon Ramsay, 54, may be known for cooking skills but it turns out he’s also a great dad! The world-famous chef is...
FAMILY RELATIONSHIPS・13 DAYS AGO
HollywoodLife

Travis Barker isn’t just one of the most celebrated drummers in music today: he’s also a doting dad of three amazing kids. Find out all about them. At first glance, Travis Barker – with his shaved head, skin covered in tattoos, piercings, and never-ending disinterested stare – doesn’t conjure the idea of “father figure.” Yet, the blink-182 drummer (and the person PEOPLE magazine once dubbed “the godfather of punk rock”) is a devoted dad of three. Ironically, the man who beat the skins on “Stay Together For The Kids,” off of blink’s Take Off Your Pants And Jacket album, shared two children with his ex-wife, Miss USA 1995 Shanna Moakler. The two reportedly began dating in 2002, wed in 2004, and finalized their divorce in 2008. In that span of time, they welcomed two children into the world: son Landon and daughter Alabama.
FAMILY RELATIONSHIPS・9 DAYS AGO
NBC News

Anderson Cooper is opening up about raising his 16-month-old son, Wyatt, with his former partner, Benjamin Maisani. “It’s probably an unusual setup, but I knew he would be a great dad, and he is,” Cooper, 54, told People. “We’re exes, but we’re family to each other, and we love each other as family and as co-parents. ...
RELATIONSHIPS・6 DAYS AGO
Amomama

The Osmonds are known for being a talented family in the music industry. However, Donny revealed that if his parents had listened to advice early on in their life, they wouldn't have been born. Donny Osmond once had an interview with Chet Cooper and Dr. Gillian Friedman about growing up...
FAMILY RELATIONSHIPS・2 DAYS AGO

Usher Raymond received a ton of funny backlashes from his Instagram followers after he recently shared a hilarious video of him and his daughter spending time together. Find out more. American singer, songwriter, and dancer, Usher Raymond IV remains one of the biggest stars in the music industry. A Grammy...
CELEBRITIES・2 DAYS AGO
The US Sun

Jamie Oliver children: How many kids does he have with wife Jools?

JAMIE Oliver is a well known face on TV, thanks to his long career as a celebrity chef. However, behind closed doors he is just known as dad to his ever expanding family with wife Jools. How many children do Jools and Jamie Oliver have?. The couple are childhood sweethearts,...
CELEBRITIES・10 DAYS AGO
Bossip

Douglas Bourne, popularly known as Doug E Doug, has a career that has spanned over thirty years in the movie industry. His love for the screen is only a fraction of his affection for his little family. Let's meet the actor's kids. American actor Doug E Doug, now 51 years...
CELEBRITIES・1 DAY AGO

Celeb Kids We Can't Believe Have Grown Up So Fast

You don’t have to be a parent to know that the saying “time goes by so fast” when it comes to kids is very true. If you’ve tuned into reality shows, followed certain celebrities on social media or found yourself oohing and aahing at a celebrity baby reveal, it’s quite the mind warp when you look up and the children you watched who were once itty bitty things turn out to not be so little anymore. They’re heading off to prom, starting college, and strutting down runways despite the fact that we remember them as babies. This thing called life!
FAMILY RELATIONSHIPS・5 DAYS AGO
pittsburghparent.com

How aging parents can connect better with their grown-up kids

Parenting is difficult, and that difficulty increases with age. Your children are grown up now, they have their own world, friends and families to worry about, you’re not the head of your household anymore. You feel left out and lonely because your kids don’t call enough or come home as much as they used to. On the other hand, your children may feel like you don’t ”get them” or understand them anymore. This can lead to resentment for both sides. In this scenario, what should an aging parent do? This article will discuss how you CAN reconnect with your children who are grown up now through communication and appreciation.
RELATIONSHIP ADVICE・4 DAYS AGO
Amomama

Fathers and daughters tend to butt heads at times, and it can be difficult for them to get along. Angelina Jolie and her father, Jon Voight, know this all too well as they were embroiled in a feud that spanned years. Any young woman will know that a relationship with...
RELATIONSHIPS・2 DAYS AGO
centralrecorder.com

The mother of a five-year-old girl with a rare type of blood cancer has said that a meeting with the Duchess of Cambridge has had a significant impact on the child. Mila Sneddon was featured in a picture from Kate’Lockdown’s photographic project. It was used to symbolize isolation during the pandemic. After she was photographed kissing the kitchen window of her home while her father stood outside, it became a symbol of her isolation.
CELEBRITIES・11 DAYS AGO

Thirty-eight years after being named the biggest baby ever born, Kevin Robert Clark is still making waves as one of the biggest people alive. He has some tips for a new baby girl that may walk in his shoes. Kevin Robert Clark, a 38-year-old man from New Jersey, first made...
NEW YORK CITY, NY・7 DAYS AGO
deseret.com

Gabby Petito’s father said he didn’t see any “red flags” from Petito’s boyfriend, Brian Laundrie, before the couple went off on a road trip. Petito, a 22-year-old from Long Island, has gone missing in recent days. She was first reported missing on Sept. 11. She did not return home from a road trip with her boyfriend, Brian Laundrie. The two spent weeks in Utah, visiting Mystic Hot Springs and Bryce Canyon, Canyonlands and Arches national parks, among other locations.
RELATIONSHIPS・8 DAYS AGO
Page Six

Benji Madden shared a heartfelt tribute to his “beautiful” wife, Cameron Diaz, in honor of her 49th birthday. The Good Charlotte rocker, 42, shared one of his paintings on his Instagram page Monday and dedicated it to the “Charlie’s Angels” star, writing, “Happy Birthday to my Wife, you are beautiful in all ways, we are so lucky to have you ❤️🙏 .
CELEBRITIES・24 DAYS AGO
Insider

The "Sex and the City" actress gave her Instagram followers a glimpse of son James Wilkie and twins Marion and Tabitha in a sweet back-to-school post.
FAMILY RELATIONSHIPS・10 DAYS AGO
Footwear News

A heartbroken Sarah Jessica Parker remembered George Malkemus as “dearest partner” and “elegant gentleman” in a touching Instagram post today. “I cannot summon the words for a fitting tribute. He deserves prose I don’t yet have. I have to gather my thoughts,” she wrote. “Today I can only say I’m utterly heartbroken. RIP dearest partner, elegant gentleman George.” A revered executive and friend to many, George Malkemus III died Thursday in New York after a battle with cancer. He was 67. Few people knew Malkemus as intimately as Parker. Ever since the pair first partnered in 2013 to launch their SJP by Sarah...
NEW YORK CITY, NY・5 DAYS AGO
HuffingtonPost

Mom-of-three, Isabel Castro, was furious when her son’s school stopped her from entering a meeting because of her low neckline top. Many schools around the world implement dress codes for students, but one school in Soledad, Colombia, also applied the rule to a parent. Isabel Castro shared what happened when...
LIFESTYLE・12 DAYS AGO
Indy100

Actor Jeff Bridges took to his personal website to inform his fans on that he he had become infected with Covid while undergoing chemotherapy for cancer. According to his hand-written note, which had since been updated to the site and digitised, Bridges received a letter from the site at which he’d been receiving chemo infusions for his cancer, informing the actor of his and his wife’s exposure to the virus. “The letter tells me I may have been exposed to the COVID-19 virus at their joint. Soon after, my wife Sue and I share an ambulance to the ICU. We both got the ‘Rona,” he wrote.
CELEBRITIES・10 DAYS AGO