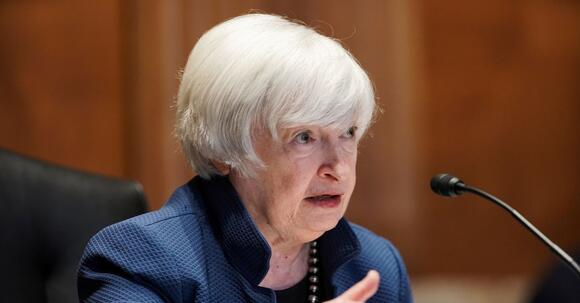 In a letter to House of Representatives Speaker Nancy Pelosi and other congressional leaders, Yellen said she was suspending investments in the Civil Service Retirement and Disability Fund and the Postal Service Retiree Health Benefits Fund that are not immediately required to pay beneficiaries.

A two-year suspension of the federal debt limit expired on Saturday, reinstating the cap at the current debt level of about $28.5 trillion.

The Congressional Budget Office has estimated that the extraordinary measures could claw back more than $340 billion in borrowing capacity under the limit. CBO said these actions, combined with the Treasury's current cash balance of about $459 billion, would allow the government to avoid a payment default into October or November as a partisan fight unfolds over a new suspension or increase in the debt cap. read more

Yellen warned Congress in late July that a critical date could be Oct. 1, when the government faces $150 billion in mandatory payments as the 2022 fiscal year starts. read more

Yellen's letter on Monday offered no new timetable for how long the extraordinary measures, which also include suspending daily reinvestments in the federal retirement "G-Fund," would last.

"I respectfully urge Congress to protect the full faith and credit of the United States by acting as soon as possible," Yellen wrote.

Treasury is required by law to make the funds whole once Congress approves a new borrowing limit.

great also cut Congressional salaries make them live like the people they represent not like royal elitist they have become. no more paying out for big spending lawmakers to line their family fortunes off the taxpayers.

Be prepared for a deep recession followed by a depression it’s coming folks. It is exactly what the Dems want. That way they can implement their socialist agenda and control everything

No more increasing the debt limit. We are borrowing money in the debt, and giving that money to other countries. We need a budget, one that pays down our debt. Budget should be no more then 3.5 trillion, that's how much the IRS takes in taxes. Fire all the congressional and senator staffers too, all of them.

US Treasury Secretary Janet Yellen pleaded Sunday for Congress to raise the debt ceiling in order to avoid a "historic financial crisis." In an editorial published in the Wall Street Journal, Yellen points out that the United States has always raised the debt ceiling before exceeding its limit. "The US has never defaulted. Not once." "Doing so would likely precipitate a historic financial crisis," Yellen wrote.
CONGRESS & COURTS・12 HOURS AGO
FXStreet.com

US Treasury Secretary Janet Yellen renewed her call for Congress to raise or suspend the debt ceiling sometime in October, Bloomberg reported, citing her editorial op-ed in the Wall Street Journal (WSJ). “The overwhelming consensus among economists and Treasury officials of both parties is that failing to raise the debt...
U.S. POLITICS・14 HOURS AGO
Axios

Yellen: U.S. would be "permanently weaker" if debt limit not raised

Treasury Secretary Janet Yellen warned in a Wall Street Journal op-ed on Sunday that the U.S. could face a fresh financial crisis if Congress failed to raise or suspend the country's debt ceiling. Why it matters: The U.S. has never defaulted on its debt, but some Republican lawmakers have threatened...
IMMIGRATION・14 HOURS AGO

When the House of Representatives comes back into session this week, averting a government shutdown and addressing the debt limit will be front and center as Democrats contend with divisions within their own ranks over President Joe Biden’s sweeping economic agenda. Staring down a government shutdown and possible default, the...
CONGRESS & COURTS・55 MINUTES AGO
Fortune

Subscribe to Fortune Daily to get essential business stories straight to your inbox each morning. The White House is warning state and local governments about severe cuts to disaster relief, Medicaid, infrastructure grants, school money and other programs if Congress fails to raise the U.S. debt limit. A fact sheet...
POTUS・3 DAYS AGO
Reuters

WASHINGTON (Reuters) -The U.S. Treasury on Thursday said it had disbursed about $700 billion of $1 trillion in COVID-19 relief programs administered by Treasury in the first six months since the American Rescue Program (ARP) was signed into law. Most of that money, $450 billion, was paid directly to families...
U.S. POLITICS・4 DAYS AGO
telegraphherald.com

WASHINGTON — The Biden administration has been enlisting one emissary after another to convince Senate Republican leader Mitch McConnell to help raise the federal debt limit. It’s not working. Despite the high-level conversations, including a call from Treasury Secretary Janet Yellen, the GOP leader is digging in and playing political...
CONGRESS & COURTS・3 DAYS AGO

WASHINGTON (Reuters) – The International Monetary Fund said on Thursday that it was important for the U.S. government should find a solution to a looming debt limit deadline to avoid “counterproductive brinkmanship” and that Washington should consider replacing the federal borrowing cap. IMF spokesman Gerry Rice told a regular press...
U.S. POLITICS・4 DAYS AGO
Newsweek

U.S. Treasury Warns Nation Will Hit Debt Limit in October if Congress Does Not Act

Treasury Secretary Janet Yellen said earlier this week that the U.S. defaulting on its debt would send shockwaves through the global financial system.
CONGRESS & COURTS・10 DAYS AGO
finance-commerce.com

WASHINGTON — Treasury Secretary Janet Yellen is warning Congress that she will run out of maneuvering room to prevent the U.S. from broaching the government’s borrowing limit in October. In a letter to congressional leaders Wednesday, Yellen said that she still could not provide a specific date for when she...
U.S. POLITICS・11 DAYS AGO
CBS News

Treasury Secretary Janet Yellen warns Congress it needs to raise or suspend the debt ceiling as U.S. government is poised to run out of cash

As the U.S. government gets closer to being unable to pay its bills, Treasury Secretary Janet Yellen on Wednesday urged Congress to act quickly to raise or suspend the debt limit. The divided Congress faces a growing list of urgent matters when it returns from recess later this month, but Democratic leaders said they must address the debt limit.
CONGRESS & COURTS・12 DAYS AGO

US to exhaust funds by October if debt limit not raised: Yellen

The US government will run out of money at some point in October unless Congress acts to increase the federal borrowing limit, Treasury Secretary Janet Yellen said on Wednesday. Congress suspended the debt limit in 2019, but the two-year suspension lapsed July 31, resetting the cap at $28 trillion and...
U.S. POLITICS・12 DAYS AGO
The Independent

US Treasury Secretary Janet Yellen has urged Congress to raise the debt limit, noting that the Treasury Department will run out of money, and measures it can take will be exhausted by October.In a letter to House Speaker Nancy Pelosi, Ms Yellen said once the debt limit was instated on 1 August, the department took extraordinary measures to finance the government temporarily, such as suspending investments in retirement funds for federal employees.“Once all available measures and cash on hand are fully exhausted, the United States of America would be unable to meet its obligations for the first time in our...
U.S. POLITICS・12 DAYS AGO
Reuters

WASHINGTON (Reuters) - U.S. Treasury Secretary Janet Yellen on Wednesday again pressed Congress to address the limit on U.S. government borrowing, saying it was unclear how long the Treasury’s measures to temporarily finance the federal government would last. The “most likely outcome is that cash and extraordinary measures will be...
CONGRESS & COURTS・12 DAYS AGO
The US Sun

MILLIONS of eligible Americans will receive a second round of the Golden State Stimulus II payment worth $1,100, the California Franchise Tax Board announced this week. The payments, released Friday, September 17, will reach direct deposit recipients first. To qualify for the second round of payment, you must file your...
NEW YORK CITY, NY・3 DAYS AGO
pymnts

US Treasury Pledges 99% Electronic Payments by 2030

The U.S. Treasury's Bureau of the Fiscal Service says it wants nearly all payments coming out of the Treasury to happen electronically within the next nine years. In its annual letter to chief financial officers, the Bureau lists the move to 99% electronic payments by 2030 as one of its financial management goals.
ECONOMY・42 MINUTES AGO
wallstreetwindow.com

Funding for a good chunk of the federal government runs out when the fiscal year ends on September 30, and the White House is reportedly pushing Congress to pass a short-term continuing resolution to keep the doors open this fall while lawmakers negotiate a full-year plan. More than just short-term...
CONGRESS & COURTS・10 DAYS AGO
Reuters