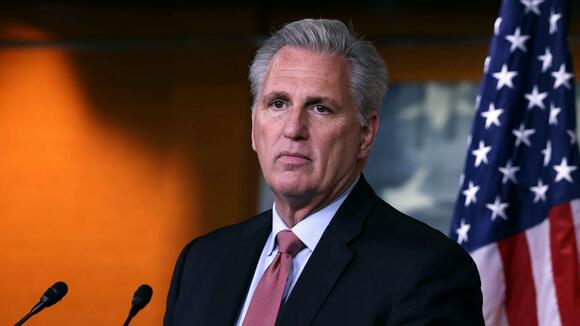 Some Democratic lawmakers are calling on House GOP Leader Kevin McCarthy to resign after he said over the weekend it would be "hard not to hit" House Speaker Nancy Pelosi with the speaker’s gavel he hopes to win if Republicans take back the House chamber in next year's midterm elections.

"I want you to watch Nancy Pelosi hand me that gavel. It will be hard not to hit her with it," McCarthy said at a GOP fundraiser in Nashville Saturday, after Tennessee’s Republican members of Congress gifted him with an oversized gavel.

McCarthy's comment was met by laughter among the audience of 1,400, according to audio posted to Twitter by a Main Street Nashville reporter and not disputed by McCarthy's office.

It comes nearly seven months after the attack on Jan 6. when a pro-Trump mob invaded the Capitol with some rioters taunting, "Where's Nancy?" while they scouted her out, and one man, armed with a taser, kicked up his feet on a desk in her office.

MORE: Kinzinger open to issuing subpoenas for members of Congress, including McCarthy

Pelosi spokesman Drew Hammill responded on Twitter Saturday, saying "a threat of violence to someone who was a target of a #January6th assassination attempt from your fellow Trump supporters is irresponsible and disgusting."

While McCarthy's office hasn't commented publicly on the growing backlash to his comments, an aide to McCarthy said "he was obviously joking" without commenting further.

The speaker herself has not weighed in.

But some of her Democratic colleagues have rushed to her defense with California Reps. Eric Swalwell and Ted Lieu calling on McCarthy to resign.

"America has suffered enough violence around politics. @GOPLeader McCarthy is now a would-be assailant of @SpeakerPelosi," Swalwell wrote on Twitter.

Lieu posed a question to McCarthy: "Don’t you think America has had enough political violence?"

"You should never be encouraging or threatening or joking about causing violence to anyone, including the Speaker of the House. You need to apologize for your statement, or resign," he said .

Other Democrats have put pressure on McCarthy to apologize. Republicans have largely stayed silent.

"Violence against women is no laughing matter," New York Rep. Hakeem Jeffries, the No. 5 House Democrat, said on Twitter.

"Speaker Pelosi used her courage and moral compass to lead us to pass the Violence Against Woman Act. Kevin McCarthy thinks joking about hitting a woman is funny. When someone shows you who they are, believe them," she said .

Some activists on Twitter -- amplifying the hashtag "#ResignMcCarthy" over the weekend -- raised how the GOP leader voted against the reapproval of the Violence Against Women Act in April 2019.

His comment and its backlash come after weeks of growing bitterness between lawmakers in Washington on issues such as mask mandates order by the Capitol physician and how to investigate the Jan. 6 attack on the building they work inside.

The House Committee on Energy and Commerce rejected a key drug pricing control bill in a stunning rebuke of House Speaker Nancy Pelosi and Democratic leadership. Democratic Reps. Kurt Schrader, Scott Peters and Kathleen Rice voted alongside their Republican colleagues on the panel, creating a 29-29 tie on the vote to pass the legislation during a committee hearing Wednesday. The hearing was held to mark up parts of Democrats’ sweeping $3.5 trillion budget reconciliation package, the Build Back Better Act.
CONGRESS & COURTS・1 DAY AGO
Newsweek

Previously, the senator reportedly told Trump he had been "written off as dead" because of the U.S. Capitol riot.
POTUS・23 HOURS AGO
Washington Examiner

House Speaker Nancy Pelosi mocked the possibility of former President Donald Trump running again in 2024. The California Democrat made jabs at Trump during an event at Cambridge University on Thursday when talking about the Jan. 6 riot at the Capitol. "I reference him from time to time as 'What's-his-name,'"...
PRESIDENTIAL ELECTION・20 HOURS AGO
Reuters

(Reuters) - Former U.S. President Donald Trump might make another White House run in 2024, but if he does, he will take his place in American history as a two-time loser, House of Representatives Speaker Nancy Pelosi predicted on Thursday. Visiting England for a meeting of parliamentary leaders from G7...
PRESIDENTIAL ELECTION・1 DAY AGO

As Democrats charge ahead with writing their massive $3.5 trillion spending bill, which they aim to pass on a party-line vote through budget reconciliation, at least one moderate Republican is warning the bipartisan infrastructure bill may lose GOP votes because it's too intertwined with the reconciliation bill. "I think Nancy...
CONGRESS & COURTS・1 DAY AGO
New York Post

If you believe the latest Bob Woodward book, the United States has lost civilian control of its military — unless you count Nancy Pelosi, who seems to have been in control of everything since she became speaker in 2019 with the single-minded goal of bringing down Donald Trump. Everything has...
CONGRESS & COURTS・1 DAY AGO
POLITICO

This episode of Playbook Deep Dive explores the health care fight overshadowing Democrats' $3.5 trillion reconciliation bill, and what's at stake — including political legacies and the future of the Democratic Party.
U.S. POLITICS・11 HOURS AGO
POLITICO

Democrats are taking their first concrete steps to avert a government shutdown in two weeks, even as they struggle to wrangle a master plan for handling multiple fiscal cliffs ahead. President Joe Biden held a joint call with House Speaker Nancy Pelosi and Senate Majority Leader Chuck Schumer on Thursday...
PRESIDENTIAL ELECTION・1 DAY AGO

McConnell is determined to resist Democratic pressure to raise the debt ceiling alongside them. The showdown could derail the economic recovery.
CONGRESS & COURTS・2 DAYS AGO
Daily Gate City

Republican establishment figures in deep-blue Maryland are bewildered Michael Steele would seek the party’s nomination for governor after voting for President Joe Biden and spending the last six years bashing the party and its elected leaders.
MARYLAND STATE・2 DAYS AGO
Vanity Fair

On Saturday, Republican lawmakers will once again have to confront the role they played in the Capitol riot, as pro-Trump protesters are descending on Washington, D.C., in support of those being prosecuted for alleged January 6 crimes. Many Republicans would rather forget the insurrection, having voted against a bipartisan panel to investigate it, while some have tried whitewashing the events of that day, even suggesting the deadly attack was like a “normal tourist visit.” But a number of Donald Trump’s most ardent supporters in Congress have grabbed the microphone in recent months to defend the Capitol rioters as “political prisoners” and accuse the Justice Department of unfairly prosecuting them. And while the “Justice for J6” rally, which is being organized by a former Trump campaign aide, has adopted this “political prisoners” line of argument, the Republican lawmakers who ramped up that rhetoric seem unwilling to join the crowd.
PROTESTS・2 DAYS AGO

Senior Senate Democrats have reached agreement with moderate Sen. Joe Manchin on a broad overhaul of U.S. voting rights law, a development that should unify all Democrats in the chamber behind a single plan for the first time. The measure would create an automatic voter registration system through each state’s...
PRESIDENTIAL ELECTION・2 DAYS AGO
Business Insider

'You have no power': Former VP Dan Quayle told Mike Pence he had to certify the 2020 election after getting pressure to overturn it by Trump, new book claims

Dan Quayle served as the US vice president from 1989 to 1993 under President George H.W. Bush. A Republican, Quayle also served as a US senator from Indiana between 1981 and 1989. He had advice for Mike Pence in 2020 as Trump stirred falsehoods about the presidential election. Desperate to...
PRESIDENTIAL ELECTION・2 DAYS AGO
WEKU

To Retake Congress, The GOP Plans To Attack Democrats On The Economy

For now Republicans' 2022 midterm election message could be summed up by an old slogan used in the 1990s by Democrats: "It's the economy, stupid." GOP lawmakers in recent weeks have piled on the Biden administration for the chaotic and deadly withdrawal from Afghanistan, and argued it has failed to respond sufficiently to the continuing pandemic the president had vowed to get under control.
PRESIDENTIAL ELECTION・1 DAY AGO
Washington Times

Vulnerable House Democrats are already being targeted over the massive tax hikes Speaker Nancy Pelosi is backing to pay for President Biden’s $3.5 trillion social welfare package. The National Republican Campaign Committee launched a five-figure ad campaign on Thursday attacking Democratic lawmakers for “selling out their constituents” by refusing to...
CONGRESS & COURTS・1 DAY AGO

Republicans are trying to distance themselves from Saturday's right-wing rally on Capitol Hill, an event that could present a tough optics problem for the party as Democrats plan to tie all Republicans to the most extreme elements of the GOP. No sitting member of Congress is scheduled to appear at...
CONGRESS & COURTS・1 DAY AGO
mediaite.com

Gaetz Takes a Shot at McCarthy Over Handling of Cheney and Kinzinger on ‘Stalinist’ 1/6 Committee, Says They ‘Are Not On Our Team Anymore’

Rep. Matt Gaetz criticized Minority Leader Kevin McCarthy for not removing Reps. Liz Cheney and Adam Kinzinger from their committee assignments after they agreed to serve on the select committee investigating the Capitol riot. That committee has asked telecommunications companies to preserve the phone records of certain Republican members of Congress.
CONGRESS & COURTS・2 DAYS AGO
iowatorch.com

WASHINGTON – U.S. Rep. Ashley Hinson released a video statement calling out what she says is ‘dysfunction” as House Democrats attempted to meet the September 15 deadline set by Speaker Nancy Pelosi, D-Calif, to finish committee work on the $3.5 trillion reconciliation bill. She also set a September 27 deadline to vote on the Senate infrastructure bill, a bill Pelosi said they would only pass along with the $3.5 trillion reconciliation bill. Hinson complained that the process of drafting the appropriations bill lacks transparency and accountability.
CONGRESS & COURTS・1 DAY AGO
Newsweek

Republicans said Thursday that if the allegations about the calls are true, Milley's "pledge to China is nothing less than outright treason."
CONGRESS & COURTS・1 DAY AGO