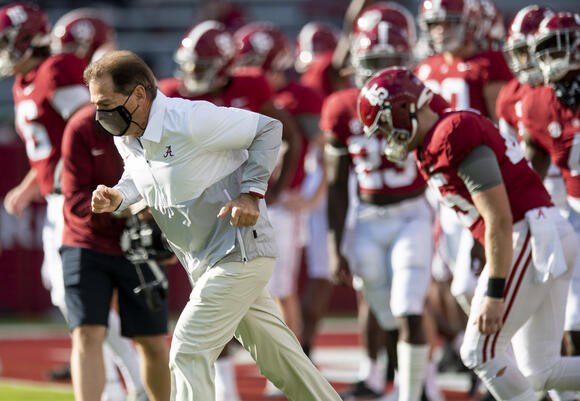 Sports Illustrated All-American released its latest college football team recruiting rankings, and Alabama moved up to second nationally from the No. 21 spot the Crimson Tide held in the previous release.

With six pledges in July alone, Alabama currently has 14 verbal commits for the 2022 cycle.

As previously mentioned, the Crimson Tide jumped from the 21st spot of SI All-American's previous recruiting rankings thanks to the six commits above.

Here's what SIAA had to say about Alabama's quick rise this summer, and where the publication has each of the Crimson Tide's July commits positionally ranked:

A half-dozen commitments came in for Alabama in July including national headliners like No. 1 edge Jeremiah Alexander, No. 2 interior offensive line prospect Tyler Booker, No. 12 cornerback Antonio Kite and top 15 linebacker Shawn Murphy, among others. Booker pairs with UA's newest commitment, Dayne Shor, to form the foundation of the program's offensive line haul.

Alabama trails only Penn State of the Big Ten in the latest release, though coach Nick Saban and company has 10 fewer commitments in the 2022 class.

One of the most-surprising results of college football’s Week 1 slate came at the Rose Bowl on Saturday evening. LSU, the No. 16 team in the country, was upset by Chip Kelly’s UCLA Bruins. The Tigers fell on the road, 38-27, on Saturday night. It’s been a tough post-national championship...
COLLEGE SPORTS・11 DAYS AGO
nfldraftdiamonds.com

Kevin Faulk is currently the running backs coach at LSU, but the former legendary running back is mourning the death of his baby girl this morning. According to multiple reports, his 19 year old daughter Kevin and a student at LSU tragically passed away this week. LSU made a statement...
NFL・2 DAYS AGO
The Spun

Head coach Nick Saban may not have been pleased with Alabama‘s season-opening win over Miami, but former Florida quarterback Tim Tebow sure was. Following the 44-13 win over the Hurricanes, Saban suggested his team didn’t play a full 60 minutes. Meanwhile, Tebow couldn’t stop gushing over the performance from quarterback Bryce Young.
ALABAMA STATE・6 DAYS AGO
USA TODAY

Alabama head coach Nick Saban has a strong message for fans ahead of Saturday’s matchup against Florida. Despite Alabama being No. 1 in the latest AP Poll and being 2-0 after two strong weeks, Saban doesn’t want fans to get complacent. Saban wants fans to have respect for the opponents in order to maintain a strong level of enthusiasm throughout the year.
ALABAMA STATE・21 HOURS AGO
saturdaydownsouth.com

USC is in the hunt for a new head coach following the firing of Clay Helton. The Trojans football program is one that features plenty of tradition and is regarded as among the best in the country. However, it hasn’t won a national championship since 2004 and has failed to even qualify for a College Football Playoff berth since the Playoff era began in the 2014 season.
COLLEGE SPORTS・1 DAY AGO
The Spun

According to a report, USC has a “top choice” in mind to replace Clay Helton as head coach. He’s a man already familiar with Pac-12 territory. Per Scott Wolf of Inside USC, the Trojans’ No. 1 candidate is none other than Oregon head coach Mario Cristobal. Cristobal just scored the...
COLLEGE SPORTS・1 DAY AGO
Fox News

The USC football job opening has almost every prominent collegiate coach linked to the program as the school launches a national search in the wake of Clay Helton’s dismissal. Minnesota coach P.J. Fleck is one of those coaches. Fleck took over as the Golden Gophers’ head coach in 2017 after...
COLLEGE SPORTS・1 DAY AGO

The 2021 college football season will feature new faces on some big-time programs, but there are some returning starters who
OKLAHOMA STATE・2 DAYS AGO
WHNT-TV

(WHNT) — The Associated Press ranked Alabama and Auburn in its Top 25 after the second week of the 2021 college football season. Alabama was ranked #1 after taking the 48-14 win against Mercer University on Saturday in Tuscaloosa. Auburn was ranked #22 after beating Alabama State University 62-0 in...
ALABAMA STATE・5 DAYS AGO
Dolphin Nation

MYRTLE BEACH (WBTW) – The latest South Carolina High School League football rankings are out for week 4 of the season. Our local squads are in BOLD below.
MYRTLE BEACH, SC・3 DAYS AGO

College football picks against the spread. Week 3 edition. It’s been a tough time to kick off the 2021 campaign,
NFL・18 HOURS AGO
Sportsnaut

Virginia Tech’s last 3-0 start came in 2017. It has been much longer since West Virginia lost to a nonconference
COLLEGE SPORTS・2 DAYS AGO
Sportsnaut

No. 23 BYU Cougars target another Pac-12 foe in No. 19 Arizona State Sun Devils

No. 19 Arizona State is preparing to play its first road game with fans in the stadium since 2019 when
ARIZONA STATE・2 DAYS AGO
Sportsnaut

The University of Alabama strengthened its hold atop the weekly rankings with the 44-13 victory over Miami to open the 2021-22 college football season season. The Crimson Tide picked up another first-place vote in the USA TODAY Sports AFCA football coaches, which was released Tuesday morning. Georgia's one first-place vote...
ALABAMA STATE・10 DAYS AGO
On3.com

On Saturday, the Alabama football team cruised to a victory over Miami to open the season. Despite the Hurricanes being the No. 16 team, according to the Coaches Poll, the Crimson Tide won big with a 44-13 final score. Considering Alabama was already ranked as the No. 1 team, it’s...
ALABAMA STATE・10 DAYS AGO
Star-Tribune

1. NEVADA WOLF PACK (0-0) Led by potential NFL first-round pick Carson Strong, the Wolf Pack has a chance to play its way back into the national spotlight for the first time since Colin Kaepernick led the program to a share of the 2009 WAC title. This week: Cal on...
COLLEGE SPORTS・14 DAYS AGO
profootballnetwork.com

After a 2020 season marred by asterisks and COVID-19 complications, it’s nice to get back to pure, unabbreviated college football in 2021. Week 1 officially takes place this weekend, with games already firing up on Thursday and Friday. Ahead of all the action, let’s take a look at our initial FBS Top 25 College Football Rankings, compiled by our NFL Draft and college football analysts.
ALABAMA STATE・13 DAYS AGO