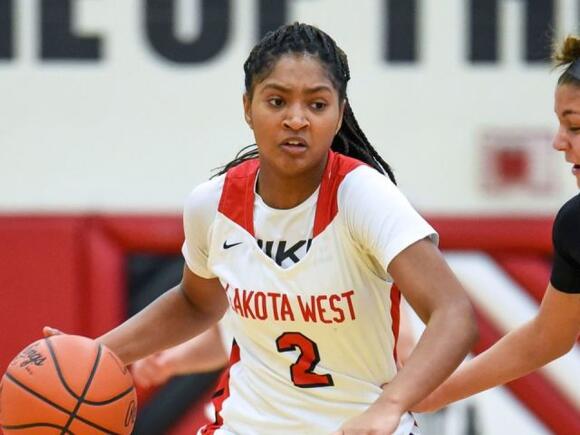 Gray, a five-star recruit, is ranked the nation's No. 7 player in the 2022 class by ESPN.com and the nation's No. 2 point guard in her class. She also considered scholarship offers that included North Carolina, Ohio State, Arizona, Michigan State, Michigan, Maryland, Mississippi State and UCLA during the recruiting process.

Gray, a Division I first-team all-state selection, was the Greater Miami Conference player of the year this past winter. She averaged 25 points, 7.4 rebounds, 3.7 assists and 2.5 steals for the Firebirds as a junior.

Our "Game of the Week" this Friday was a GCL-South showdown between Elder and St. Xavier. The Bombers once again proved they belong at the top of the Ohio high school football rankings. St. Xavier beat Elder 52-14 after scoring 38 unanswered points to close-out the game.
HIGH SCHOOL・17 HOURS AGO
WCPO 9 Cincinnati

The St. Xavier football team won its sixth consecutive game this season with a 52-14 win over visiting Elder.
14 HOURS AGO
WCPO 9 Cincinnati

St. Xavier senior kicker Mason Rohmiller is one of six captains for the undefeated Bombers this season. He also has a 4.4 grade-point average.
CINCINNATI, OH・3 DAYS AGO

Hamilton celebrates West Side players with days of their own

With COVID-19 protocols in place, it was the West Side Little League players who took the field in the seats usually occupied by Hamilton City Council.
HAMILTON, OH・1 DAY AGO
WCPO 9 Cincinnati

The Beechwood football program enjoyed its first win over CovCath since 2014. Plus, catching up with former NFL player DeShawn Wynn and inside the college recruiting of Walnut Hill basketball standout Tyler McKinley.
WYOMING, OH・3 DAYS AGO
WCPO 9 Cincinnati

No. 8 Bearcats take big step, next one looms at Notre Dame

In two weeks, the Bearcats could have another breakthrough moment at No. 12 Notre Dame as they aim to break up the Power Five’s monopoly on College Football Playoff bids.
CINCINNATI, OH・5 DAYS AGO

Rose Lavelle thrilled her hometown fans with a goal and three assists in the first 15 minutes, Alex Morgan scored three goals and the United States women routed Paraguay 8-0 in an exhibition on Tuesday night.
CINCINNATI, OH・3 DAYS AGO
WCPO 9 Cincinnati

The football season is back on at Western Hills and Dater High School, where practice and games were suspended after video of an alleged hazing incident circulated online, but former head coach Armand Tatum won’t be on the sidelines.
CINCINNATI, OH・8 DAYS AGO
WCPO 9 Cincinnati