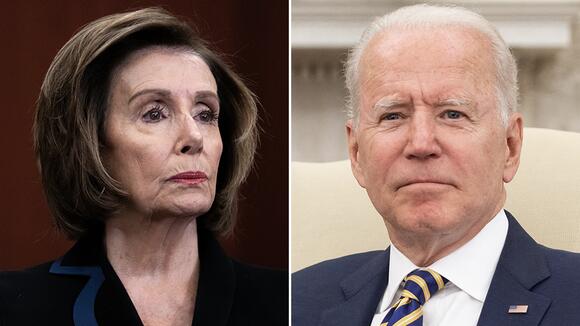 Top House Democrats on Sunday called on the Biden administration to extend the eviction moratorium amid the coronavirus pandemic, hours after the ban expired, putting millions of Americans at risk of being forced out of their homes.

“Action is needed, and it must come from the Administration. That is why House leadership is calling on the Administration to immediately extend the moratorium,” Speaker Nancy Pelosi (D-Calif.), Majority Leader Steny Hoyer (D-Md.), Majority Whip James Clyburn (D-S.C.) and Assistant Speaker Katherine Clark (D-Md.) wrote in a joint statement.

The group cited the rising risks associated with COVID-19, particularly with the highly infectious delta variant spreading throughout the country, as reasons why the moratorium should be extended through Oct. 18.

“As the CDC doubles down on mask-wearing and vaccination efforts, science and reason demand that they must also extend the moratorium in light of the delta variant,” the lawmakers wrote. “Doing so is a moral imperative to keep people from being put out on the street which also contributes to the public health emergency.”

The eviction moratorium expired at midnight on Saturday after the House left for recess two days earlier, unable to strike a deal on an extension.

The Biden administration called on Congress to pass an emergency extension of the eviction ban, set in place by the Centers for Disease Control and Prevention (CDC), on Thursday, three days before it was set to expire.

The Supreme Court last month ruled that while the CDC's moratorium could stay intact until its expiration date, the agency exceeded its authority when it put the ban in place. Justice Brett Kavanaugh said the ban could not be extended past its expiration date unless by an act of Congress.

The leading Democrats in their statement on Sunday contended that it “will not be sufficient” to extend the moratorium in the House because the Senate would not have the means to approve a bill.

“On Thursday, the President asked Congress to pass an extension of the eviction moratorium. Sadly, it is clear that the Senate is not able to do so, and any legislation in the House, therefore, will not be sufficient to extend the moratorium,” the leaders wrote.

Some members in the Democratic Party, however, are not pleased with their colleagues’ inability to pass an extension.

Rep. Alexandria Ocasio-Cortez (D-N.Y.) on Sunday said Democrats cannot “in good faith blame the Republican Party” for the eviction ban expiring because Democrats have the majority in the House.

Progressive lawmakers, led by Rep. Cori Bush (D-Mo.), who previously experienced homelessness, camped outside the Capitol on Friday night to protest the moratorium expiring. She called on House leadership to reconvene the lower chamber to pass an extension.

The top Democratic lawmakers, however, are now tossing the ball to the Treasury Department, urging the office to “indicate how the funds that it has already transferred to states and communities can be more effectively distributed to renters and landlords.”

The Hill has reached out to the White House for comment.

why? the unemployment money and stimulus money, was more than enough to keep up the bills. every business has help wanted signs hung in the windows. there is no reason to put property owners in a bad position. making it hard for them to pay their bills. there is no moratorium for bank foreclosure. this will have a domino effect! that will bankrupt America. nobody likes working all the time. but I love my family enough to work through the pain. put on your big boy pants America! time to get to work🇺🇸👆

landlords are people too.The stimulus money was supposed to help with that and many are just using the pandemic as a weapon to not pay their bills because they feel the MAN owes them something .

landlords need their money for the banks...WHO GIVES Them a reprive? . there are jobs in every community outside the shithole of CA. QUIT FEEDING THE BEARS. but Joe will..cause he's a sellout to the American way that built this country.

Democrats pushed a $3.5 trillion, 10-year bill strengthening social safety net and climate programs through the House Budget Committee, but one Democrat voted “no,” illustrating the challenges party leaders face in winning the near unanimity they'll need to push the sprawling package through Congress The Democratic-dominated panel, meeting virtually Saturday, approved the measure on a near party-line vote, 20-17. Passage marked a necessary but minor checking of a procedural box for Democrats by edging it a step closer to debate by the full House. Under budget rules, the committee wasn’t allowed to significantly amend the 2,465-page measure, the product...
PRESIDENTIAL ELECTION・21 HOURS AGO
Washington Post

News flash: The Grand Old Party, also known as the Deadbeat Republican Party, is unwilling to pay the bills and ready to turn off the lights in America. No principles here; this is all about politics — no matter the consequences of this deliberately inflicted economic crisis with a global pandemic and multiple natural disasters as a backdrop.
CONGRESS & COURTS・1 DAY AGO
NJ.com

Democratic control of White House and Congress is ‘a moment for America to go big,’ Booker says

Democrats need to use their levers of power “to go big” and make a meaningful difference in the lives of Americans by approving trillions of dollars in spending now, U.S. Sen. Cory Booker said Sunday. Speaking on NBC’s “Meet the Press,” the New Jersey Democrat said the party may not...
CONGRESS & COURTS・10 HOURS AGO
USA TODAY

House Democratic leaders must persuade moderates the Senate will join them in approving a $3.5 trillion budget bill
PRESIDENTIAL ELECTION・1 DAY AGO

Biden: Budget talks hit ‘stalemate,’ $3.5T may take a while

WASHINGTON (AP) — President Joe Biden says that talks over his $3.5 trillion rebuilding plan have hit a “stalemate” in Congress as he made the case for his expansive effort to recast the nation’s tax and spending programs and make what he sees as sweeping, overdue investments. Biden spoke at...
POTUS・1 DAY AGO
Reuters

WASHINGTON, Sept 26 (Reuters) - U.S. House of Representatives Speaker Nancy Pelosi on Sunday set a vote on the $1 trillion bipartisan infrastructure bill for Thursday and voiced confidence it would pass. Debate on the legislation, which passed the Senate with Democratic and Republican support on Aug. 10 and would...
CONGRESS & COURTS・17 MINUTES AGO
The Guardian

The House passed Friday a broad pro-choice bill that would sweep away state restrictions on abortion, a speedy but largely symbolic vote in reaction to a wave of pro-life measures in Texas and other red states making their way to the Supreme Court. The House voted 218-211 to approve the...
CONGRESS & COURTS・2 DAYS AGO

Senate Republicans want the Justice Department to roll back Trump-era restrictions on congressional oversight criticized at the time as an attempt to insulate the Trump administration from Democratic investigators, Axios has learned. Why it matters: While some Republicans spoke out against the DOJ guidance at the time, it was mostly...
CONGRESS & COURTS・2 DAYS AGO
Axios

House Speaker Nancy Pelosi (D-Calif.) on Friday unveiled the full text of President Biden's $3.5 trillion social spending package. Why it matters: Democrats are racing to finish negotiations and get the bill on the floor as soon as possible so Pelosi can fulfill her promises to both House centrists and progressives about the timing and sequencing of passing the party's dual infrastructure packages.
PRESIDENTIAL ELECTION・2 DAYS AGO
Dallas News

WASHINGTON – Four House Republicans, including two Texans, have filed articles of impeachment against President Joe Biden, accusing him of failures in Afghanistan and at the border and of abusing his power by extending a pandemic-related freeze on evictions. Reps. Brian Babin of Woodville and Randy Weber of Friendswood joined...
CONGRESS & COURTS・2 DAYS AGO
MSNBC

Democrats scramble as the GOP gloats over a potential economic meltdown

Congress, in all its arcane, archaic beauty, has one main job: managing the country’s money. The power of the purse being in the hands of our directly elected representatives is vital to democracy. Unfortunately, this is a job that Congress is increasingly bad at. Some of this is because of...
PRESIDENTIAL ELECTION・2 DAYS AGO

House Democrats say they’ll try to pass the embattled infrastructure and social welfare spending package next week despite intraparty differences over the deal and little coordination with the Senate.
CONGRESS & COURTS・2 DAYS AGO
NBC News

WASHINGTON — The White House has started to tell government agencies to prepare for a potential government shutdown if a stopgap bill is not signed into law by Sept. 30. "We are taking every step we can to mitigate the impacts of a potential shutdown," said White House press secretary Jen Psaki during a briefing on Thursday.
POTUS・3 DAYS AGO
The Guardian

House Democrats voted on Friday to establish a federal right to abortion, moving swiftly to advance the measure after the supreme court declined to stop a Texas law effectively outlawing the procedure and as they await a separate ruling next year that could further erode access. The legislation, named the...
CONGRESS & COURTS・2 DAYS AGO
The Independent

House SpeakerNancy Pelosi chided Republicans for not voting to raise the debt limit on Thursday, asking why Democrats always need to be more responsible.The House Speaker hosted Senate Majority Leader Chuck Schumer and Treasury Secretary Janet Yellen during her weekly press conference. On Tuesday, the House voted to extend the debt limit until December 2022 and keep the government open until 3 December of this year.“They voted to shut down government and not honour the full faith and credit of the United States of America,” Ms Pelosi said, noting that the bill included disaster relief for those affected by...
PRESIDENTIAL ELECTION・3 DAYS AGO
WashingtonExaminer

Rep. Ted Deutch accused fellow House Democrat Rep. Rashida Tlaib of besmirching an ally and engaging in antisemitic remarks after she delivered a condemnation of Israel during a funding debate over Israel’s Iron Dome.
CONGRESS & COURTS・3 DAYS AGO
WEKU

The White House and congressional Democrats have reached an agreement on a framework to pay for a final spending package, House Speaker Nancy Pelosi, D-Calif., and Senate Majority Leader Chuck Schumer, D-N.Y., announced Thursday. But that's where the details stopped. Pelosi and Schumer didn't offer any specifics on the framework...
CONGRESS & COURTS・3 DAYS AGO
Daily Mail

A group of Republican lawmakers led by Ohio Rep. Bob Gibbs want President Joe Biden out of office and filed articles of impeachment against him on Tuesday. Gibbs claims the president violated his oath of office on three points, according to text obtained by DailyMail.com: the southern border crisis, the evictions moratorium and Biden's botched withdrawal from Afghanistan.
CONGRESS & COURTS・4 DAYS AGO
kcur.org

U.S. Rep. Cori Bush has co-sponsored a bill to give the federal Department of Health and Human Services the power to implement federal eviction moratoriums during a public health crisis. This legislative effort comes after the U.S. Supreme Court ruled in August that the Centers for Disease Control and Prevention...
CONGRESS & COURTS・4 DAYS AGO