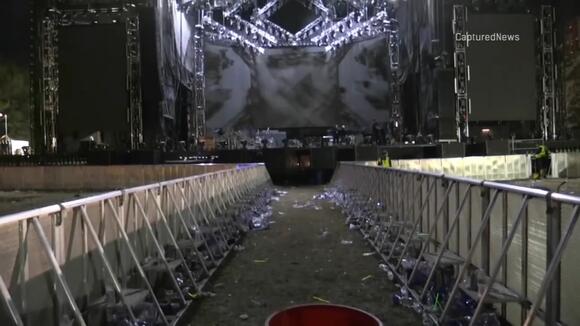 Lollapalooza has wrapped up and cleanup is underway as Mayor Lori Lightfoot defends the event and the COVID-19 protocols that were in place. The big question remains, with 100,000 people here a day, will the four-day festival lead to another city shut down? Monday morning, crews are clearing away the trash at Grant Park, but the real concern isn't what was left behind, but what could lie ahead. Fight over fake Lollapalooza tickets ends with 3 men crashing through Congress Hotel glass For four days, huge crowds, flooded Lollapalooza, raising concerns the music festival could turn into a "super spreader." "It started on Thursday. The next couple of days you could potentially see cases. I think by next weekend we're probably going to be having a good idea about how much transmission occurred because of Lollapalooza," said Dr. Robert Citronberg with Advocate Aurora Health. On Sunday, Mayor Lightfoot noted that millions of people have already attended events since the city fully reopened in June, including Cubs and Sox games and smaller festivals. "We've been able to open but do it with care because of the vaccinations," she said. "So I feel very good about what we've done. Obviously, we'll know a little bit more in a week to 10 days. But we have to keep pushing the fact that the unvaccinated are the people that are at risk."

Right now, Chicago is reporting an average of 206 new cases of COVID per day and most of those hospitalized are not vaccinated. Despite the uptick, Chicago Department of Public Health Commissioner Dr. Allison Arwady said there are no current plans to shut down the city again. "We have no goal or current plans to close down Chicago again, but we need people, please, once again to step up," Dr. Arwady said. "We've made it through this pandemic. Well, so far, especially when you compare what happened right at the beginning to after we were able to get a lot of these mitigations in place." The popular music festival quickly made last-minute changes to admission requirements as Chicago COVID cases continue to rise and as health officials aim to once again slow the spread of the virus amid the contagious delta variant. County health officials announced Friday a new "universal masking" recommendation , prompting festival organizers to modify their COVID safety protocols. Concert-goers were required to show proof of vaccination or a negative test in order to enter, but following the Friday announcement, organizers pivoted to also requiring masks be worn in any indoor spaces at Grant Park as of Saturday. Back at Grant Park, Lollapalooza veteran, Parker Simonaitis, said he felt completely safe at the festival. "They were checking vaccine cards, pretty cautiously," Simonaitis said. "I felt good in the crowds. They were giving out masks right at the entrance. I feel like they did as safe as they could and I feel coming out as a vaccinated person pretty positive about what they were doing to protect us." Chicago officials said there were a total of 19 arrests and 102 hospital transports from this year's festival. There were 31 arrests and 116 transports in 2019 and 12 arrests and 160 transported in 2017. One of the final day headliners, DaBaby, was pulled from the lineup as of Sunday morning, according to event organizers. In a Tweet, Lollapalooza organizers said "Lollapalooza was founded on diversity, inclusivity, respect, and love. With that in mind, DaBaby will no longer be performing at Grant Park tonight." The rapper posted an apology to Insagram Monday , "to the LGBTQ+ community for the hurtful and triggering comments" he made. "Social media moves so fast that people want to demolish you before you even have the opportunity to grow, educate, and learn from your mistakes," the post said in part. "I apologize for my misinformed comments about HIV/AIDS and I know education on this is important."

Some Haitians at U.S. border released, others deported as pressure builds on Biden

CIUDAD ACUNA, Mexico, Sept 22 (Reuters) - Amid deteriorating conditions in migrant camps on both sides of the U.S.-Mexico border, U.S. authorities on Wednesday tried to deal with thousands of the mostly Haitian migrants that have gathered, releasing some in south Texas while deporting others on flights. Wade McMullen, an...
IMMIGRATION・3 HOURS AGO
Reuters

French envoy to return to U.S. after fence-mending Biden-Macron call

PARIS/WASHINGTON, Sept 22 (Reuters) - The U.S. and French presidents moved to mend ties on Wednesday, with France agreeing to send its ambassador back to Washington and the White House acknowledging it erred in brokering a deal for Australia to buy U.S. instead of French submarines without consulting Paris. In...
POTUS・5 HOURS AGO
CNN

(CNN) — A law enforcement underwater dive team arrived at a nature reserve in Florida on Wednesday as part of the search for Brian Laundrie, Gabby Petito's fiancé who has been missing for several days. A large van and boat from the Sarasota County Sheriff's Office arrived midday Wednesday at...
SARASOTA COUNTY, FL・14 HOURS AGO
Reuters

WASHINGTON, Sept 22 (Reuters) - The United States on Wednesday promised to buy 500 million more COVID-19 vaccine doses to donate to other countries as it comes under increasing pressure to share its supply with the rest of the world. President Joe Biden made the announcement during a virtual summit...
U.S. POLITICS・2 HOURS AGO

NEW YORK (AP) — Former President Donald Trump on Tuesday sued his estranged niece and The New York Times over a 2018 story about his family’s wealth and tax practices that was partly based on confidential documents she provided to the newspaper’s reporters. Trump’s lawsuit, filed in state court in...
NEW YORK CITY, NY・17 HOURS AGO
CNN

Willie Garson, 'Sex and the City' actor, dead at 57

(CNN) — Actor Willie Garson, known for his role on the "Sex and the City" series and films, has died, according to his son, Nathen Garson. He was 57. "I love you so much papa. Rest In Peace and I'm so glad you got to share all your adventures with me and were able to accomplish so much," his son wrote on Instagram. "I'm so proud of you."
CELEBRITIES・21 HOURS AGO
The Associated Press

Fed: On track to slow support for economy later this year

WASHINGTON (AP) — Federal Reserve Chair Jerome Powell signaled Wednesday that the Fed plans to announce as early as November that it will start withdrawing the extraordinary support it unleashed after the coronavirus paralyzed the economy 18 months ago. Powell said that if the job market maintained its steady improvement,...
BUSINESS・3 HOURS AGO
ABC News

After months of negotiations, bipartisan police reform talks are officially over without a deal, Sen. Cory Booker confirmed.
CONGRESS & COURTS・47 MINUTES AGO

A 16-year-old boy was killed and two other children were hurt in a shooting at a school bus stop in Louisville, Kentucky, Wednesday morning, according to local police. The three children were waiting for a bus when they were shot in a drive-by at about 6:30 a.m. local time, police said.
LOUISVILLE, KY・5 HOURS AGO
Fox News

White House press secretary Jen Psaki on Wednesday slammed what she called "brutal and inappropriate" behavior by Border Patrol agents seen on horseback blocking migrants from entering the United States. During her daily press briefing, Psaki was asked whether President Biden was living up to his campaign promise of restoring...
U.S. POLITICS・2 HOURS AGO