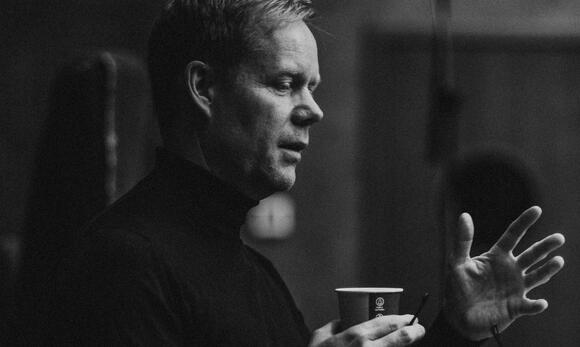 When Max Richter sat down to compose a new ballet score in 2015 he knew what he wanted to say. In April of that year, an overcrowded vessel sank off the coast of Libya, en route to Italy, killing at least 800 trapped migrants – including children aged between 10 and 12. From his (then) home town of Berlin, the crisis was impossible to ignore. The German chancellor Angela Merkel uttered the words Wir schaffen das (we can do this ), but as the number of refugees applying for asylum rose, attacks on their homes did, too .

Richter’s response was instinctive: a 33-minute work titled Exiles, composed for Sol León and Paul Lightfoot’s Singulière Odyssée at the Nederlands Dans Theater, inspired by what Richter calls “the big question at that time”. Five years after it premiered in 2016, this reflective piece now forms the heart and soul of Richter’s new album, Exiles, recorded in Tallinn, Estonia, in 2019, and set to be released on 6 August. It is a retrospective collection comprised of newly orchestrated tracks taken from his back catalogue. Yet Richter tells me, on a video call from his home in Oxfordshire, that it remains relevant despite our quick-turn news cycle: “This crisis is still with us in different forms.”

The theme of exile, journeys and borders is something that Richter kept in mind when picking the orchestra to play his music, a loose gathering of musicians from Denmark, Estonia, Finland, Germany, Latvia, Lithuania, Norway, Poland, Russia and Sweden. Richter believes the Baltic Sea Philharmonic has a “peacemaking” function: “The idea of music being a shared space where people with different experiences, viewpoints and social contexts can come together and make something.” The post-Brexit isolationist position of the UK has only emboldened this ethos for Richter. “I’m a European,” he says. “These kinds of transnational problems call for collaboration, they call for a fundamental working together, and a rethinking of what boundaries and borders even mean in 2021.”

When the conductor Kristjan Järvi describes the orchestra he founded in 2008 he calls it “youthful” and “naive”; a vagabond collective that seeks to “erase the borders between east and west”. Grinning in the sunshine from his garden just outside Tallinn, Järvi reminisces about his early childhood in Estonia in the 1970s, looking out towards Finland, a beacon of freedom that lay frustratingly out of reach on the other side of the Gulf. “Those borders don’t exist any more,” he tells me. Instead, the Baltic Sea is now “the glue that holds all these EU and non-EU countries, Slavic and non-Slavic, together as a cultural unit. States reborn as an orchestra.”

Every era has a different type of exile, Järvi tells me. Only a few weeks ago, Estonians marked the 80th anniversary of what is called the June deportation, in which thousands of people were forcibly removed from their homes by the Soviet Union. “This whole idea of exiles is a story of humanity because you can even distil it down to tribalism,” he says. “I own this piece of land, you own that piece.” The Baltic Sea Philharmonic’s mission statement is to transcend these boundaries and break the rules, not only in regards to what contemporary society means in 2021, but how a traditional orchestra should mobilise and how it should create.

In 2017, they performed Stravinsky’s The Firebird entirely from memory, a technique that the Baltic Sea Philharmonic regularly adopts. Musicians often stand rather than sit, and they are frequently separated from their sections. “Why would Mozart want to be like Haydn or Beethoven like Schumann ?” Järvi asks. “Every orchestra is a microcosm of society and this society is a completely non-hierarchical model of authority.” For Richter, this ideology made them the perfect orchestra to play his works: compositions that he calls “activist music”.

Can he explain what he means by that, I ask? “I think creativity by its nature is activism,” he says. “It’s about meaning, it’s about experiment, it’s about the unknown, it’s about discovery.” Each track on Exiles has been carefully chosen. Richter has raked over his musical past, reorchestrating On the Nature of Daylight, his response to the outbreak of the Iraq war, and reimagining The Haunted Ocean 1, from a soundtrack that scored writer and director Ari Folman’s animated documentary about the Lebanon war, Waltz With Bashir , in 2008.

Every musical recording is a voyage of discovery, Richter tells me. “Those human beings in that room, on that day, that’s what makes it special. It’s a laboratory.” Järvi calls it subquantum music. The Estonian conductor might be an F-sharp guy and Richter may be G-flat, but they’re still sitting on the same note. When he hears Richter’s orchestral visions he feels them as if he has written them himself. Harmonic shifts, he says, live within us all.

And yet, for all its searching, Exiles ends on a “what if” moment that is far from resolved. “Is there a better way for us to be headed?” Richter asks me. “Are we going to be able to shift things into something more humane, more sustainable and a bit more equal? That’s the big question.”

“Once is happenstance,” wrote James Bond’s creator. “Twice is coincidence. Three times, it’s enemy action.” As European politicians and security agencies ponder the three explosions that caused leaks in the two Nord Stream gas pipelines under the Baltic Sea on Monday, they may find this adage of Ian Fleming’s helpful in resolving their doubts about who was responsible.
POLITICS・2 DAYS AGO
The Guardian

The city’s water department has a small yet effective solution to keep its famous residents’ water use in check – a flow restrictor
LOS ANGELES, CA・22 HOURS AGO
The Guardian

The US and its allies would destroy Russia’s troops and equipment in Ukraine – as well as sink its Black Sea fleet – if Russian president Vladimir Putin uses nuclear weapons in the country, former CIA director and retired four-star army general David Petraeus warned on Sunday.
MILITARY・1 DAY AGO
The Guardian

Russia has put Marina Ovsyannikova, the former state TV editor who interrupted a news broadcast to protest against the Ukraine war, on a wanted list after she reportedly escaped house arrest. The Ukrainian-born Ovsyannikova, 44, gained international attention in March after bursting into a studio of Channel One, her then...
PROTESTS・12 HOURS AGO
The Guardian

Employees have grown to love the flexibility of remote working, and firms keen to keep their staff can do little about it, surveys find
ECONOMY・2 DAYS AGO
The Guardian

The Florida governor passes the hat for disaster relief.
FLORIDA STATE・2 DAYS AGO

‘Our entire community is wiped out’: low-income Americans likely to be hit hardest by Hurricane Ian

People scramble for shelter, funds and news of missing loved ones
FLORIDA STATE・2 DAYS AGO
The Guardian

Russia-Ukraine war latest: what we know on day 223 of the invasion

Russia no longer has full control of any of the four provinces of Ukraine it says it annexed last week, after Ukrainian troops reportedly advanced dozens of kilometres in Kherson province. The Russian military has acknowledged that Kyiv’s forces had broken through in the Kherson region. It said the Ukrainian army and its “superior tank units” had managed to “penetrate the depths of our defence” around the villages of Zoltaya Balka and Alexsandrovka.
POLITICS・3 HOURS AGO
The Guardian

African Parks, of which the royal is president, is one of three parties accused of rushing a mass translocation of the mammals
ANIMALS・2 DAYS AGO
The Guardian

Maggie Haberman, the New York Times’ Trump whisperer, delivers. Her latest book is much more than 600 pages of context, scoop and drama. It is a political epic, tracing Donald Trump’s journey from the streets of Queens to Manhattan’s Upper East Side, from the White House to Mar-a-Lago, his Elba. There, the 45th president holds court – and broods and plots his return.
POTUS・1 DAY AGO
The Guardian

Elon Musk has prompted an online row with Ukraine’s president after he asked Twitter users to weigh in on his ideas to end Russia’s war. In a tweet, Musk suggested UN-supervised elections in four occupied regions that Moscow has falsely annexed after what it called referendums. The votes were denounced by Kyiv and western governments as illegal and coercive. “Russia leaves if that is will of the people,” Musk wrote.
BUSINESS・4 HOURS AGO
The Guardian

The Indigenous activist died on Sunday, less than two months after the Academy apologised over her treatment at the 1973 Academy Awards
CELEBRITIES・22 HOURS AGO
The Guardian

Two children, one night to survive as a solo parent… What could possibly go wrong?

For the past few weeks, we’ve been trying to get our little cherub to drink formula so her mum can have a bit more freedom. The first few weeks of trying were calamitous, as our doughy poppet seemed utterly repelled by the thought of latching on to anything that wasn’t anatomically connected to someone. She interpreted our first offerings of formula as, ‘Here is some poison for you to drink.’ Now, she gives us the annoyed, but indulging, response one typically gets from the words, ‘Is Pepsi OK?’ which we consider progress. My daughter’s attitude to me is generally similar. I adore her, but she thinks me merely pleasant, holding me in the strained ambivalence my wife has for the people who do holiday cover for Radio 2 presenters.
KIDS・1 DAY AGO
The Guardian

Venezuela swaps prisoners with US in hint of thawing relations

Venezuela has freed seven imprisoned Americans in exchange for the US releasing two nephews of President Nicolás Maduro’s wife who had been jailed for years on narcotics convictions. The swap of the Americans, including five oil executives held for nearly five years, follows months of back-channel diplomacy by...
U.S. POLITICS・1 DAY AGO
The Guardian

Brazil election: why was Sunday’s result so disappointing for the left?

Brazil’s left went into Sunday’s election hoping for an outright majority for their candidate Luiz Inácio Lula da Silva over Jair Bolsonaro, the far-right figurehead who has been Brazil’s president for the last four years. At the very least, they hoped for a commanding margin and...
POLITICS・18 HOURS AGO