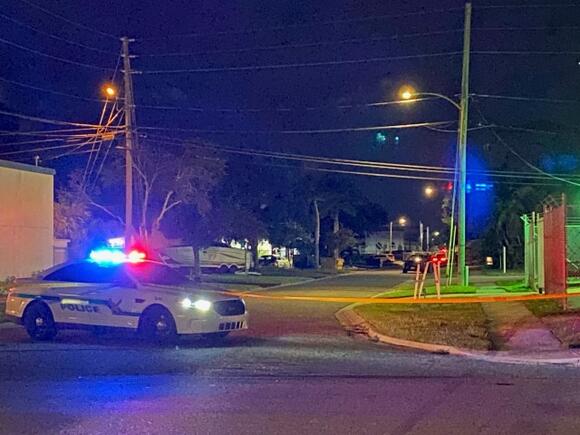 Two men were found shot at two different locations in St Petersburg. Police responded to a report of a person bleeding at around 7 p.m. Sunday night. Police found two scenes. One at the 3200 block of 11th Avenue South and another at 20th Avenue North and 29th Street North. One man was dead at each location. Both men were believed to be shot and died from the injuries.

The names of the two people shot have not been released.

This is a developing story. Refresh browser at abcactionnews.com for details.

The St. Petersburg Police Department is tracking 26 homicides so far in 2021, that's higher than the average of around 20 per year.
SAINT PETERSBURG, FL・2 DAYS AGO
ABC Action News WFTS

Deputies search for driver responsible for Ruskin hit and run

Hillsborough County deputies are looking for the driver that hit and killed a biker overnight in Ruskin.
HILLSBOROUGH COUNTY, FL・3 DAYS AGO
ABC Action News WFTS

Finding Gabby Petito without fiancé Brian Laundrie’s cooperation will be extremely difficult according to law enforcement experts in Utah. Gabby wasn’t reported missing until two weeks after the 22-year-old was last seen in Salt Lake City. The man who might know where she is, isn’t talking.
NORTH PORT, FL・2 DAYS AGO

HILLSBOROUGH COUNTY, Fla. — Florida Highway Patrol troopers are asking for help finding the driver involved in a deadly hit-and-run in Hillsborough County on Saturday, September 11. According to the FHP, the driver hit a 67-year-old woman who was walking in the travel lane along SR 580, or Hillsborough Avenue,...
HILLSBOROUGH COUNTY, FL・5 DAYS AGO
ABC Action News WFTS

'Tell us where Gabby is located': Petito's family pleads to fiance's family to bring her home safe

NORTH PORT, Fla. — As law enforcement agencies in multiple states, along with the FBI, continue to search for missing 22-year-old Gabby Petito; her family begged for help from her fiance's family to help locate her. "Please, if you or your family have any decency left, tell us where Gabby...
NORTH PORT, FL・3 DAYS AGO
ABC Action News WFTS

Sheriff: 19-year-old sentenced to life in prison for murdering his adoptive mother

A 19-year-old man was sentenced to life in prison for the premeditated murder of his adoptive mother back in July 2019, officials said.
CITRUS COUNTY, FL・4 DAYS AGO

North Port Police named the boyfriend of a missing 22-year-old as a person of interest on Wednesday. Police describe the case as a "complex and far-reaching" situation.
NORTH PORT, FL・4 DAYS AGO
ABC Action News WFTS

Police in Florida were seen dropping off a pink envelope at the home of missing woman Gabby Petito‘s boyfriend — as authorities say they’re preparing for the possibility that something "sinister" has happened to her.
FLORIDA STATE・5 DAYS AGO
ABC Action News WFTS

It’s been on the grounds of Curlew Memorial Gardens cemetery since 2012 and started with a request from an elementary classroom and a fire department.
PALM HARBOR, FL・9 DAYS AGO