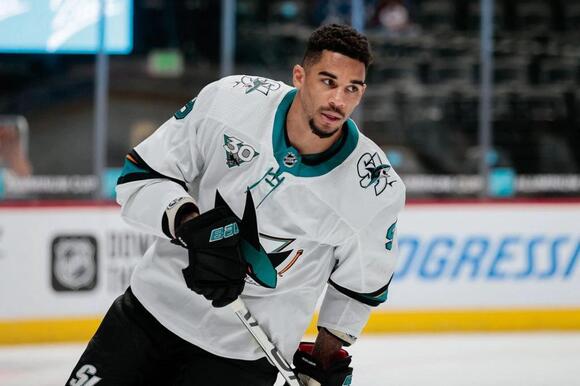 San Jose Sharks forward Evander Kane emphatically denied allegations made by his wife that he gambled on his own games and intentionally tried to lose to cash in on his wagers.

Kane posted two statements to Twitter on Sunday, one day after the allegations against him were made on an Instagram account that appears to belong to his wife, Anna. He referred to her as his “estranged” and “soon to be ex wife” in the statements.

The NHL announced Saturday night that it will investigate the matter.

“The League was made aware this evening of a post on social media alleging that San Jose Sharks Player Evander Kane bet on NHL games,” the league said in a statement. “The integrity of our game is paramount and the League takes these allegations very seriously. We intend to conduct a full investigation and will have no further comment at this time.” 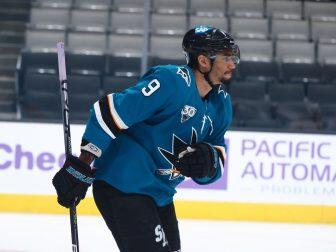 Also Read:
NHL to investigate Evander Kane for betting on own games

In addition to calling Kane a “compulsive gambling addict” and accusing him of “obviously throwing games to win money,” Saturday’s Instagram post also alleged that Anna Kane had to sell her wedding ring to buy formula for the couple’s baby while Evander Kane partied in Europe.

“I love my daughter. I will and always have taken care of my daughter in every way possible,” Kane wrote Sunday. “I have always made sure her mother has had everything she’s needed and more. I have tried to de-escalate our divorce issues and be as civil and calm as anyone in this position could. I have tried to set up FaceTime calls and visits with her. I have had some FaceTime calls but not every day as I would like because of being restricted by her mom. She has refused me to see her and has unfortunately tried to use my daughter as leverage.”

Related: If you’re a fan of the Sharks, check out #SharksTerritory rumors, rankings, and news here .

Kane, 29, is entering the fourth season of a seven-year, $49 million deal.

His career plus-minus rating is minus-67 in 769 games with the Atlanta Thrashers/Winnipeg Jets, Buffalo Sabres and Sharks. He has 264 goals and 242 assists (506 points) in 12 seasons.

Potential Hertl trade, starting goalie among unknowns. NHL.com is examining where each team stands in preparation for the 2021-22 regular season, which starts Oct. 12. Today, five questions facing the San Jose Sharks:. 1. Could Tomas Hertl be traded before the season ends?. The 27-year-old forward is in the final...
NHL・12 DAYS AGO
prohockeyrumors.com

4:00pm: The Sharks have officially announced the deal, with GM Doug Wilson releasing a short statement:. Noah showed last season that he has the tools to be an effective player at the NHL level by utilizing his speed. We feel that he will elevate the competition among our forward group for a roster spot this season.
NHL・10 DAYS AGO
markerzone.com

Evander Kane of the San Jose Sharks addressed several topics in his sit-down interview with Linda Cohn of ESPN, his first since a number of controversies came to light starting last January. Kane filed for bankruptcy to protect himself from creditors after racking up huge gambling debts. There were also accusations from his estranged wife Anna that he bet on games he was involved in. In the interview, Kane admitted to having a gambling problem when asked about being $27 million in debt.
NHL・7 DAYS AGO
Yardbarker

He was directly asked: Have you ever bet on the NHL? “Not at all,” he responded. “Have you ever gambled on any one of your own games? “Never,” he said with conviction. “Have you ever intentionally tried to lose a game. “No,” as he chuckled, somewhat awkwardly. His point was to suggest that he didn’t do any of the things he was accused of and he’s confident and comfortable knowing he’ll be seen as someone who was wrongly accused.
NHL・7 DAYS AGO

Navigating the salary cap is one of the more important tasks for any GM. Teams that can avoid total cap chaos by walking the tightrope of inking players to deals that match their value (or compensate for future value without breaking the bank) remain successful. Those that don’t see struggles and front office changes.
NHL・11 DAYS AGO
Marin Independent Journal

The NHL expects to conclude its investigation into allegations that San Jose Sharks forward Evander Kane gambled on NHL games before the start of training camp, the league’s deputy commissioner, Bill Daly, said Thursday. The league plans to release a report on its findings next week. That would follow the...
NHL・8 DAYS AGO
theScore

San Jose Sharks forward Evander Kane believes he'll be cleared in the NHL's investigation of his estranged wife's allegations that he gambled and threw his own games. "Obviously (the accusations are) incredibly false. It's unfortunate that transpired, and it's unfortunate that those false allegations were made," Kane told ESPN's Linda Cohn.
NHL・7 DAYS AGO
Chico Enterprise-Record

Sharks’ Kane expects to be cleared in gambling probe, downplays rifts with teammates

San Jose Sharks forward Evander Kane again flatly denied that he wagered on NHL games – including his own — and expects to be cleared of any wrongdoing in the league’s ongoing investigation. In an interview with ESPN that aired Thursday, Kane called the allegations that he gambled on NHL...
NHL・7 DAYS AGO

Evander Kane, Tomas Hertl expected to be back with Sharks in 2021-22

Between the ongoing investigation into Evander Kane and the trade rumors swirling around Tomas Hertl, it seemed that potentially neither would be back with the San Jose Sharks this season. Add in that Hertl is believed to be one of the Sharks’ core members who was upset with Kane’s presence in the locker room last year and did not want him to return, it certainly did not seem that both would be back in 2021-22. Yet, it is growing increasingly more likely that this in fact will be the case.
NHL・5 DAYS AGO
KEYT

SAN JOSE, Calif. (AP) — The NHL has found no evidence that San Jose Sharks forward Evander Kane bet on NHL games or tried to throw games after investigating allegations made by his estranged wife. Anna Kane alleged in an Instagram post this summer that Kane bet on NHL games and was “obviously throwing games to win money,” launching a probe by the league. The league is still investigating allegations of physical and sexual abuse made by Anna Kane. The Sharks say Kane will not take part in training camp until further notice while that investigation proceeds.
NHL・1 DAY AGO
blackchronicle.com

The NHL completed its gambling investigation of Evander Kane and said it has found no evidence that the San Jose Sharks forward bet on his own games. The investigation, which was conducted by Patterson Belknap Webb & Tyler LLP, in conjunction with NHL Security, was spurred by allegations in social media posts by Kane’s wife, Deanna. The couple recently entered divorce proceedings.
NHL・1 DAY AGO
chatsports.com

The NHL announced that its investigation found no evidence to support allegations that San Jose Sharks forward Evander Kane bet on hockey and tried to throw Sharks games. Kane’s estranged wife, Anna Kane, levied several serious allegations against the veteran NHL player, including those related to gambling, in social media posts in July.
NHL・1 DAY AGO

The San Jose Sharks say they "are aware of additional allegations" against Evander Kane that are unrelated to the NHL's initial investigation into whether he gambled on league games and, until further notice, have decided the forward will not participate at training camp. Earlier on Wednesday, the NHL released a...
NHL・1 DAY AGO
The Hockey Writers

San Jose Sharks defenceman Erik Karlsson feeds Evander Kane on a perfectly played 2-on-1. The winger crosses the blue line and fires a soaring wrist shot over the glove hand of netminder Ville Husso. The ice is filled with teal sweaters as teammates celebrate their overtime victory over the St. Louis Blues on March 8, 2021.
NHL・22 HOURS AGO
FOX Sports

SAN JOSE, Calif. (AP) — The San Jose Sharks opened training camp with a big void at forward with Evander Kane not participating and little idea of when or if he will come back. The Sharks took the ice for the first time this season Thursday, a day after Kane...
NHL・19 HOURS AGO
The Hockey Writers

Finally, business is about to pick up for the Columbus Blue Jackets. This week on News & Rumors, we are going to focus on two major events that act as the unofficial start of Training Camp. We’ll get you set for both Development Camp and the Traverse City Prospect’s Tournament. First, let’s look at the roster for camp and the tournament.
NHL・11 DAYS AGO
chatsports.com

I’ve long been alone in feeling there are similarities between the Philadelphia Flyers and the San Jose Sharks, but a new goaltender, paired with a new-look defense might finally convince some folks that Philadelphia is doomed to repeat the errors of Sharks teams past. Yes, the Flyers will now get...
NHL・16 DAYS AGO
Sports Radio 1360 AM

I know, the Buffalo Bills are what has everyone's mind occupied in Western New York right now, and for good reason...but the Buffalo Sabres will soon be back, and maybe quicker than you think. The Sabres first preseason game in just over two weeks, September 28th against the Columbus Blue...
NHL・10 DAYS AGO
Sportsnaut

The Tampa Bay Lightning have won the Stanley Cup in consecutive seasons. Check out the Game 5 recap below, plus
NHL・7 DAYS AGO
2 On Your Side

Theme nights starts October 14 with the home opener against the Montreal Canadiens. Fans attending the game will receive a special edition T-shirt.
NHL・2 DAYS AGO