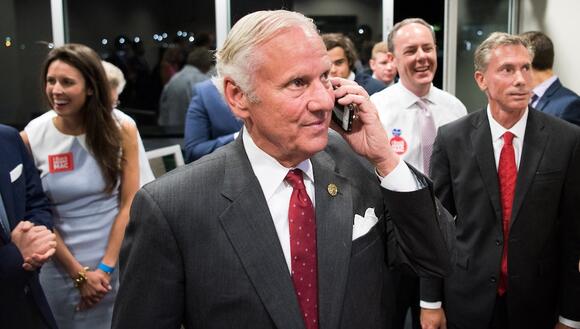 South Carolina Gov. Henry McMaster (R) on Sunday accused health experts of "hyperbole" and "exaggeration" in regards to the current COVID-19 surge brought on by the more infectious delta variant.

During an appearance on Fox News Sunday, McMaster affirmed to guest host Dana Perino that he would not be enacting a statewide mask mandate and when it came to vaccinations the governor said he would let residents "make their decision" based on information provided to them.

"I think that the tone and the — I think of some exaggeration [is] going on, some hyperbole. Those figures that you just mentioned, yes the rates are going up but they're way below what they were a year ago," McMaster said. "We have put the fire out. It's smoldering in places and could come back up, but the house is not on fire again."

According to state data, 44.5 percent of South Carolina residents are fully vaccinated and 51 percent have received at least one dose.

"We're gonna trust the people to do the right thing, we're giving them the right information, but I believe a lot of our national experts are are engaging in frightening hyperbole," McMaster added.

Over 600,000 dead from the Virus is no exaggeration. McMaster is minimizing the impact of loss. He is too far removed from reality.

McMaster...you are the main one that is going to be held responsible when it all goes south in our state...ignorance begats more ignorance and thats what you are spewing.

Death from COVID is not a Hyperbole. It's a scary reality Col McMustard in the office with a pen. Your denial of the virus is not a game of Clue

WASHINGTON — House progressives are digging in on their resistance to passing the infrastructure bill this week, repeating their threat to block the measure despite Speaker Nancy Pelosi's call to pass it quickly and tackle the social safety net package later. Rep. Pramila Jayapal, D-Wash., the chair of the progressive...
CONGRESS & COURTS・2 HOURS AGO
NBC News

Timeline of the R. Kelly allegations

R. Kelly has long been trailed by troubling accusations of sexual misconduct and abuse, even as he climbed the Billboard charts and earned Grammys for his R&B music. The scrutiny on the singer intensified in the #MeToo era — particularly after the premiere of “Surviving R. Kelly,” a 2019 documentary series that featured interviews with several of his accusers.
CELEBRITIES・1 DAY AGO
Reuters

SEOUL, Sept 29 (Reuters) - The projectile North Korea fired off its east coast on Tuesday was a newly developed hypersonic missile, state news media KCNA reported on Wednesday, the latest in a series of new weapons tested by the reclusive state. North Korea fired the missile towards the sea...
MILITARY・26 MINUTES AGO
NBC News

The Ford Motor Co. gave the auto industry a jolt Monday with word that it plans to spend $11.4 billion on new production sites in Tennessee and Kentucky where it plans to build electric pickup trucks and cars — and the batteries to power them — on a massive scale.
BUSINESS・1 DAY AGO

WASHINGTON, Sept 28 (Reuters) - U.S. General Mark Milley, chairman of the Joint Chiefs of Staff, fended off perhaps the most personal and direct attacks from lawmakers of his career on Tuesday as Republicans blasted his calls with China and his interviews for books critical of Donald Trump's presidency. Milley,...
FOREIGN POLICY・2 HOURS AGO
ABC News

GENEVA, Sept 28 (Reuters) - More than 80 aid workers including some employed by the World Health Organization (WHO) were involved in sexual abuse and exploitation during an Ebola crisis in the Democratic Republic of Congo, an independent commission said on Tuesday. The probe was prompted by an investigation last...
PUBLIC SAFETY・5 HOURS AGO

WASHINGTON, Sept 28 (Reuters) - U.S. Senate Republicans for a second day in a row blocked a bid by President Joe Biden's Democrats to head off a potentially crippling U.S. credit default, as partisan tensions rattled an economy recovering from the COVID-19 pandemic. With federal government funding due to expire...
CONGRESS & COURTS・2 HOURS AGO
The Hill

Treasury Secretary Janet Yellen and Senate Democrats on Tuesday blasted Republicans for refusing to back a bill that would raise the federal debt limit and allow the government to pay off expenses approved over more than a decade by Congress and presidents from both parties. Yellen urged Republicans to take...
CONGRESS & COURTS・55 MINUTES AGO