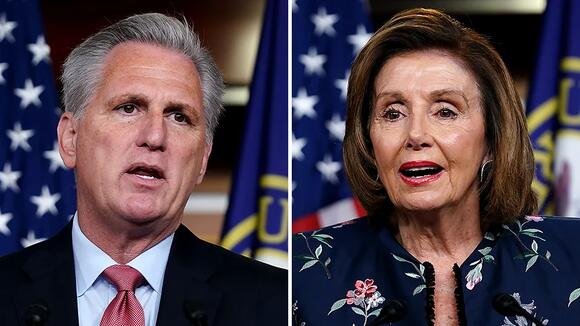 House Minority Leader Kevin McCarthy (R-Calif.) joked over the weekend that it would be hard for him not to hit Speaker Nancy Pelosi (D-Calf.) with a gavel if the GOP wins control of the lower chamber in next year's midterm elections.

At a dinner on Saturday evening, members of Tennessee's Republican congressional delegation gave McCarthy an oversized gavel with the words "Fire Pelosi" on it.

"It will be hard not to hit her with it but I will bang it down," McCarthy reportedly joked, according to Washington Post reporter Michael Scherer.

Several Republican leaders from Tennessee, including Gov. Bill Lee and Sen. Marsha Blackburn , were reportedly in attendance at the $250-a-plate dinner event.

A war of words between the two party leaders escalated last week when McCarthy joined other Republicans in vehemently protesting a mask mandate the Capitol physician reimposed and Pelosi supported.

"Make no mistake — The threat of bringing masks back is not a decision based on science, but a decision conjured up by liberal government officials who want to continue to live in a perpetual pandemic state," McCarthy tweeted on Tuesday night.

"He's such a moron," Pelosi responded when asked about McCarthy.

McCarthy and others in Republican leadership also expressed outrage when Pelosi weeks earlier rejected two GOP representatives from the House commission investigating the Jan. 6 attack on the U.S. Capitol.

Democrats hold a slim majority in the House, and Republicans are looking to flip enough seats to give the GOP control of the lower chamber and make McCarthy Speaker.

McCarthy's joke was swiftly condemned by a number of House Democrats.

This is US. We used to laugh at the governments of other countries that conducted the "people's" business in this manner. What do we call them? "Banana Republics" ? Now look at US.

Don't worry, no chance of him being speaker in his lifetime. Dumbass maga insurrectionist republican!

Liz Cheney on McCarthy Embracing Trump: 'I Would Be Deeply Ashamed of Myself'

Cheney said "a lot" of Republicans "both in the House and the Senate" have privately encouraged her fight against Trump.
POTUS・13 HOURS AGO
The Guardian

WASHINGTON — House Democratic leaders told lawmakers Friday that they hope to pass both the infrastructure bill and the multitrillion-dollar megabill next week, a highly ambitious timeline. Two wings of the House Democratic caucus have been locked in a fight over the bills, with both sides threatening to sink legislation...
CONGRESS & COURTS・2 DAYS AGO
speaker.gov

House Democrats say they’ll try to pass the embattled infrastructure and social welfare spending package next week despite intraparty differences over the deal and little coordination with the Senate.
CONGRESS & COURTS・2 DAYS AGO
Marietta Daily Journal

Pelosi dares Democrats with plan for votes on Biden agenda

WASHINGTON — House Speaker Nancy Pelosi is attempting to line up consequential votes next week on President Joe Biden’s economic agenda, making a high-stakes wager that warring Democratic factions won’t sink the bills if their competing demands aren’t met. At stake is the fate of the most significant investment in...
PRESIDENTIAL ELECTION・2 DAYS AGO
Newsweek

Other top Democrats said they were in the dark about the "framework" of the deal.
CONGRESS & COURTS・3 DAYS AGO

George Soros: In Nancy Pelosi we Trust! as Speaker meets with Democrat megadonor

The Soros family has put Democrat Speaker of the House Nancy Pelosi on the same pedestal as God. Why wouldn’t they? Pelosi carries out the radical progressive agenda at the will of George Soros and the Open Society Foundation he uses to funnel tens of millions of dollars into the campaigns of Democrats.
CONGRESS & COURTS・12 DAYS AGO
AFP

US House Speaker Nancy Pelosi expressed confidence a massive infrastructure bill will pass this week but acknowledged it might not get a Monday vote as planned, with fellow Democrats warning critical work remains to meet the party's deadlines. But Pelosi, despite her confidence that the $1.2 trillion infrastructure bill that has already cleared the Senate with bipartisan support will pass the House of Representatives "this week," hinted at potential quicksand ahead.
CONGRESS & COURTS・13 HOURS AGO
Fox News

House Speaker Nancy Pelosi announced an impeachment inquiry into former President Trump exactly two years ago amid a scandal that surrounded the former president over a phone call with Ukraine President Volodymyr Zelenskyy. "This week, the president has admitted to asking the president of Ukraine to take actions which would...
PRESIDENTIAL ELECTION・2 DAYS AGO
CNN

(CNN) House Democrats have quietly moved to restrict the GOP's ability to use its limited power in the minority to press for investigations, an effort that has Republicans crying foul as they seek to pressure their foes over the Biden administration's handling of Afghanistan. According to publicly available documents reviewed...
CONGRESS & COURTS・3 DAYS AGO

“I'm never bringing a bill to the floor that doesn't have the votes,” said U.S. House of Representatives Speaker Nancy Pelosi to ABC News on Sunday, per Reuters. The news adds, "Let me just say that we're going to pass the bill this week," said Pelosi. Previously, the Democrat hinted...
CONGRESS & COURTS・15 HOURS AGO
Washington Times

With so much attention on Joe Biden and the Senate these days, not many people are looking at what old Nancy Pelosi is doing. But one Republican firebrand hasn’t let the speaker off the hook.
5 DAYS AGO
investing.com

U.S. Speaker Pelosi: Capitalism has not served our economy as well as it could

LONDON (Reuters) - Capitalism has not served the U.S. economy as well as it could have, U.S. House of Representatives Speaker Nancy Pelosi said on Friday, saying that the system needed to be improved. "In America, capitalism is our system, it is our economic system, but it has not served...
U.S. POLITICS・10 DAYS AGO

The bill now heads to the House Rules Committee for expected amendments before it lands on the floor for a vote.
CONGRESS & COURTS・1 DAY AGO
whtc.com

WASHINGTON (Reuters) – U.S. House of Representatives Speaker Nancy Pelosi said she told British Prime Minister Boris Johnson the Good Friday Accords that ended decades of conflict in Northern Ireland continue to have bipartisan support in the U.S. Congress. “Respectful of the will of the British people and Brexit, I...
CONGRESS & COURTS・10 DAYS AGO
POLITICO

WASHINGTON (Reuters) – U.S. Speaker of the House of Representatives Nancy Pelosi said on Sunday she was “deeply concerned” about the alleged torture of a Saudi aid worker while in detention in Saudi Arabia. The aid worker, Abdulrahman al-Sadhan, was detained by Saudi authorities in March 2018 and reported to...
FOREIGN POLICY・14 DAYS AGO