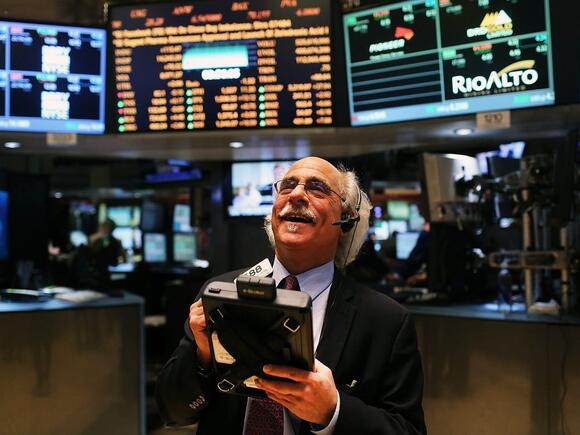 Corporate earnings growth, which has historically been the main driver of stock market returns, is growing at its fastest pace since 2009, according to data compiled by FactSet .

With more than half of the S&P 500 having already reported second quarter earnings, year-over-year profit growth stands at 85%, well ahead of analyst estimates for earnings growth of 63%. And of the companies that have reported earnings so far, 88% have beaten both revenue and profit estimates.

The above-average earnings growth rates are due to both higher earnings for 2021 and an easier comparison relative to weaker earnings in 2020 due to the COVID-19 pandemic. In the fourth quarter of 2009, S&P 500 earnings grew 109%.

The strong earnings results have led Wall Street analysts to revise higher their earnings estimates for the third quarter, though at a slower pace relative to the past quarter, according to FactSet analyst John Butters. The Q3 bottom-up S&P 500 EPS estimate increased by 3.6% to $49.22 from $47.50 in the month of July, according to Butters.

"The third quarter marked the fifth straight quarter in which the bottom-up EPS estimate increased during the first month of the quarter, which is the longest streak since FactSet began tracking this metric in 2002," Butters said.

Sectors driving the increase in earnings estimates include Energy and Materials, while the Consumer Staples sector recorded a decline in analyst estimates for next quarter.

Companies driving large earnings beats this quarter included Alphabet , Apple , and Microsoft , while Amazon reported a mixed quarter that led to a 7% decline in its stock price on Friday.

The S&P 500 currently trades at a 12-month forward price-to-earnings ratio of 21.2x, which is lower than its recent reading of about 22x, but higher than its five an ten-year average of 18.1x and 16.2x, respectively, according to FactSet.

Bram Berkowitz mainly writes in the financials bureau covering the banking sector. Prior to The Motley Fool, he wrote about and covered community and regional banks in New England for The Warren Group. Amazon has never looked stronger, and it's built to win the future. U.S. Bancorp survived Berkshire Hathaway's...
STOCKS・1 DAY AGO
MarketWatch

Costco’s stock set up to fall after earnings, and that’s the time to buy it, analyst says

Shares of Costco Wholesale Corp. are likely to dip after the membership-based warehouse retail giant reports earnings, but that when investors should buy, said long-time bullish analyst Rupesh Parikh at Oppenheimer.
RETAIL・22 HOURS AGO
The Motley Fool

McDonald's and Walmart have proved they can thrive through most selling environments. Their stocks haven't participated in 2021's rally. Their dividend payments will help cushion investors' returns during market pullbacks. There's never a shortage of confident-sounding predictions about what's coming up for Wall Street, but no one ever knows for...
STOCKS・16 HOURS AGO
The Motley Fool

Potential trillion-dollar stocks can make you filthy rich, but how to find them? Do this. Spot megatrends and find companies already making waves. Clean energy, e-commerce, fintech, gaming, and software are some worth a look. Stocks with game-changing growth potential can grow exponentially in a matter of years, but among...
STOCKS・1 DAY AGO

Crude oil shot up more than 3% in only one day amid rising demand and a supply disruption, while many oil and gas stocks were up even more.
STOCKS・13 HOURS AGO
The Motley Fool

Over the long run, dividend stocks have vastly outperformed their non-dividend peers. These ultra-high-yield dividend stocks offer the right blend of stability and growth to generate serious income for investors. Although there is no shortage of strategies that can prove profitable on Wall Street, buying dividend stocks is arguably the...
STOCKS・1 DAY AGO
MarketWatch

Why this fund combination is better than the S&P 500

Should You Be Worried About a Stock Market Crash? Here’s What the Data Suggests

Over the past 19 months, investors have witnessed history on both ends of the spectrum. They’ve navigated their way through the quickest decline of at least 30% in the history of the storied S&P 500 (SNPINDEX: ^GSPC), and they’ve subsequently reveled in the strongest bounce-back rally from a bear market bottom of all time. Since bottoming out on March 23, 2020, the benchmark index has more than doubled in value.
STOCKS・1 DAY AGO

The stock market is afraid again. Here's what that means for your investments

New York (CNN Business) — It's been a wobbly week on Wall Street and CNN Business' Fear and Greed Index is flashing "Fear." The stock market is in a weird place. It has fallen in most of the trading sessions this month. The S&P 500 (SPX), which is the broadest measure of the US stock market, only has four higher closes this month, and one of those was more or less flat. Meanwhile, the Fear & Greed Index is sitting at 37, which signals fear.
STOCKS・1 DAY AGO
Motley Fool

Short-term volatility creates buying opportunities for long-term investors. Coupa Software has built a strong moat around its business. This stock has the potential to grow tenfold in the next decade for two key reasons. Growth stocks tend to be volatile investments, and the market often overreacts to both their good...
STOCKS・1 DAY AGO
money.com

If you want to hear an optimistic outlook for the stock market right now, don't ask investors. Investors' expectations that stock prices will rise over the next six months dropped 16.4 percentage points this week to 22.4%. That's the lowest level of bullish sentiment since the heart of the pandemic in July 2020 and far below the historical average low of 28%, according to the latest American Association of Individual Investors (AAII) sentiment survey.
STOCKS・1 DAY AGO
GOBankingRates

Rolls Royce is in no need of an introduction, but what about its stock? Is it a buy, sell or hold? Should you invest in Rolls Royce stock? Check out this guide.
ECONOMY・1 DAY AGO
MarketWatch

Credit Suisse analyst Susan Roth Katzke on Friday reiterated her outperform rating and $450 a share price target for Goldman Sachs Group Inc. on a strong trading environment and progress on new initiatives. The investment bank's financial targets "look more easily achievable and sustainable," Katzke said in a note to clients. Analysts currently forecast third-quarter earnings of $9.70 a share for Goldman Sachs, according to FactSet data. Credit Suisse analyst Katzke said the investment bank has benefitted from strong capital market activity and ample fundraising in its asset and wealth management unit. She added that progress against strategic initiatives is outpacing expectations, particularly in trading and banking. Shares of Goldman Sachs fell 1.7% on Friday. The stock is up about 48% so far this year, compared to a rise of 27.4% by the Financial Select Sector SPDR Fund .
STOCKS・1 DAY AGO
The Motley Fool

Is It Safe to Invest in the Stock Market Right Now?

The stock market has experienced a phenomenal year, but some people worry a correction is coming. Market downturns are normal, but they can still be alarming. With the right strategy, you can help your investments survive market volatility. Investing in the stock market can be intimidating, especially during periods of...
STOCKS・2 DAYS AGO
GOBankingRates

The Smartest Stocks to Buy With $500 Right Now

It doesn't take a boatload of money to build wealth on Wall Street, especially if you own innovative stocks. For nearly 18 months, investors have enjoyed a historic rally. Since bottoming out on March 23, 2020, the benchmark S&P 500 has more than doubled in value. Considering that most bear market bounce-back rallies feature wild swings in both directions, this has truly been something special for patient investors.
STOCKS・2 DAYS AGO
GOBankingRates

With a single purchase of an ETF, you can track any number of different sectors or market indices. Consider these top funds to help diversify your portfolio.
STOCKS・1 DAY AGO
The Motley Fool

The company is securing partners to join its marketplace. This rapidly growing company is also winning in the battle for workers. The company's success is no secret to the market, which has responded by bidding up the stock price. DoorDash (NYSE:DASH) stock has been on fire lately. It's up 32%...
STOCKS・1 DAY AGO
Entrepreneur

Stocks Poised For Record Gains On Record Growth And Stimulus

With the economy set for historic growth this year, and stocks poised to soar, this is one of those times in the market that people will look back on either with great excitement for taking full advantage of it, or with utter regret for missing out on an opportunity of a lifetime.
STOCKS・1 DAY AGO
WGAU

Stocks fall on Wall Street, giving up the week's gains

Wall Street capped an up-and-down week of trading Friday with a broad sell-off that wiped out the major indexes' gains for the week. The S&P 500 lost 0.9% and posted its second straight weekly loss. Roughly 80% of the stocks in the benchmark index fell. Technology and communication companies accounted for much of the pullback. Industrial and financial stocks also were big drags on the index. Only the index's health care sector managed a gain.
STOCKS・1 DAY AGO