Tennis-Germany's Zverev cruises past Khachanov to Olympic gold in Tokyo 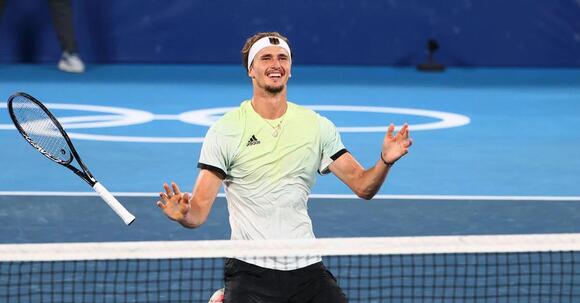 The 24-year-old, who has yet to win a Grand Slam title, was in stunning form as he demolished Khachanov in 79 minutes to become the first German man to win a singles Olympic gold.

Zverev, who secured a rare win over world number one Novak Djokovic in the semi-finals, became only the second German to win Olympic singles tennis gold by matching Steffi Graff's achievement at the 1988 Seoul Olympics.

"There are only few people in this world who are happier than me at the moment," Zverev said. "I can't compare it because this is so much bigger than anything else in sports," he told reporters.

"A gold medal for me at the Olympics, the value is incredible. The Olympics is the biggest sporting event in the world. There is nothing compared to this.

"I have this golden thing around my neck and it is not one of the 50 gold chains that I normally wear."

Zverev was flawless throughout and never allowed his opponent to get a look-in as he grabbed an early break and cruised to a 3-1 lead in the first set.

There were no signs of any nerves as he broke Khachanov for a second time and bagged the first set when his opponent sent an easy volley wide on the German's second set point.

Zverev had struggled with a string of personal issues in the past few years as well as a messy change of management while also building a reputation of being a hugely talented player who fails to close out big matches.

But on Sunday not even the loud protests of a handful of anti-Olympic demonstrators, booming into Centre Court through a bullhorn, could distract him as he broke the hapless Russian again in the second game of the second set.

Long criticised for his perceived mental weakness, including losing to Dominic Thiem in last year's U.S. Open final when he surrendered a two-set lead, Zverev proved the doubters wrong this time.

He remained in complete control, thundering backhand winners past his opponent who could only look on as he settled for silver when he dumped a forehand into the net on Zverev's first match point.

The German dropped to his knees before lifting his arms aloft in triumph, knowing he had finally landed a big prize.

Khachanov has won all four of his ATP titles on hard courts but never came close to adding to that haul on Sunday.

Khachanov was competing in Tokyo as a representative of the Russian Olympic Committee (ROC) because the country was stripped of its flag and anthem for doping offences.

Germany also won Olympic gold in the doubles with Boris Becker and Michael Stich at the 1992 Barcelona Games.

Spain's Pablo Carreno Busta had secured the bronze on Saturday after beating Djokovic.

German tennis star Alexander Zverev was inspired by the fact that he was representing his country and that made him extremely motivated to do well at the Tokyo Olympics. Zverev, ranked at No. 4 in the world, captured his maiden gold medal at the Tokyo Olympics after beating Karen Khachanov in the final.
TENNIS・6 DAYS AGO
HollywoodLife

Serena Williams is resting after dropping out of the US Open but that hasn’t stopped the tennis star from looking fabulous. Is there anything Serena Williams, 39, can’t do? The tennis star looked gorgeous as she lounged in her backyard wearing a gray geometric patterned Nike sports bra with a high-waisted sheer black pleated midi skirt and black suede Stuart Weitzman heeled booties. Serena posted a slideshow of photos of herself with the caption, “Resting and healing, but make it fashion @stuartweitzman.”
TENNIS・25 DAYS AGO
SPORTbible

Emma Raducanu has revealed what her first purchase will be after pocketing $2.5m (£1.81m) from her sensational US Open win...and it's not what you'd expect. Maybe a nice house, or a cheeky upgrade from your Fiat Cinquecento?. Nope. According to Metro, the 18-year-old told ESPN that the first thing she...
TENNIS・14 DAYS AGO
The Independent

Former tennis star Andy Roddick has told people to ‘stop overreacting’ to Emma Raducanu’s medical break in the US Open final.Brit Raducanu skidded to try and return Leylah Fernandez’s shot during the last game of the match which resulted in the 18-year-old’s knee bleeding.At this point, Raducanu was leading by one set and five games to three in the second. Fernandez was on the verge of breaking her opponent when the break came in, with some claiming it had an influence on the match.Roddick disagreed and tweeted: “Everyone trying to kill joy by overreacting to the stoppage in play...
TENNIS・13 DAYS AGO

EMMA RADUCANU could join the ranks of tennis' leading stars after her U.S. Open success. The Brit, 18, collected a cheque worth £1.8million after her victory in New York, but that is set to rise considerably through sponsorship deals and endorsements. Agent Jonathan Shalit, chairman of InterTalent, has predicted big...
TENNIS・12 DAYS AGO
news-shield.com

Top coach and tennis mentor Patrick Mouratoglou raves about the talent and excited tennis that teenage sensations Leylah Fernandez and Emma Raducanu are displaying at the US Open.
TENNIS・16 DAYS AGO
HollywoodLife

The Duchess of Cambridge slipped on her tennis attire for a friendly match with 18-year-old US Open winner Emma Raducanu in London. Kate Middleton, 39, was in the presence of tennis royalty at the National Tennis Centre in London on Friday, September 24. The Duchess of Cambridge was paired with US Open winner Emma Raducanu, 18, for a friendly doubles match for the Lawn Tennis Association’s homecoming event. Kate was dressed super sporty in a blue tennis skirt and matching zip-up tracksuit jacket, and she was all smiles while playing alongside the teenage British Grand Slam champion.
TENNIS・2 DAYS AGO
firstsportz.com

“I know Emma Raducanu will be a world-beater, I see the potential” says the former coach of Andre Agassi and Monica Seles

An Australian swimmer who won a gold medal at the Tokyo Olympics and competes for Los Angeles' team in the International Swimming League has been hospitalized after testing positive for COVID-19. Madison Wilson, 27, said she's fully vaccinated against the coronavirus when she announced on Instagram she'll be receiving treatment at a hospital.
PUBLIC HEALTH・5 DAYS AGO
Tennis World Usa

'Rafael Nadal will continue to fight until...', says former No.1

At the start of the 2020 season, Rafael Nadal was 840 points ahead of Novak Djokovic at the top of the ATP ranking list, with two great rivals dominating the rest of the Tour in 2019. Rafa and Novak took all four Major titles and four Masters 1000 events in 2019, pushing each other to the limit and establishing the battle for world number one for the ATP Finals.
TENNIS・19 DAYS AGO
The Independent

It began with a spritz of blue. Jon Rahm and Sergio Garcia, the Spanish duo out to evoke an emotionally charged history, led from the front, took the ascendancy and never faltered against a formidable US pairing of Jordan Spieth and Justin Thomas. But what followed on the opening morning of the foursomes, as the Ryder Cup finally got underway at a soft and sunlit Whistling Straits, soon amounted to a crimson bloodbath.The session ended 3-1 in Team USA’s favour, but the emphatic nature of those individual points confirmed a truth Padraig Harrington will have feared. The immense quality...
GOLF・1 DAY AGO
dallassun.com

U.S. Open champion Emma Raducanu has pulled out of next week's Chicago Fall Tennis Classic, according to multiple reports. The 18-year-old Raducanu recently returned to her home in England after being away for seven weeks. Raducanu is currently slated to play at the BNP Paribas Open at Indian Wells, Calif.,...
TENNIS・4 DAYS AGO

Serena Williams turns 40 on Sunday with her long-time coach hailing her as the "greatest of all time" and a pioneer of tennis "intimidation". Yes, it would be better if Serena broke her record but, if she doesn't, she will still be the greatest player of all time."
TENNIS・1 DAY AGO
newsbrig.com

Shreeshanar’s father, Murali, who is also his coach, has been removed from the position after the Olympics. Shreeshankar was way below his best at the Games, and could not even qualify for the final of his event. The AFI also decided to conduct trials before events, to select the final team.
SPORTS・12 DAYS AGO
atlantanews.net

Bellary (Karnataka) [India], September 12 (ANI): JSW Group organised a felicitation ceremony at the Inspire Institute of Sport in Bellary that had Neeraj Chopra, Bajrang Punia, Ravi Dahiya and PR Sreejesh in attendance to recognise and reward India's best-ever performance at an Olympic Games. The Saturday afternoon began with the...
SPORTS・14 DAYS AGO
Sportsnaut

Who sold out? Who was knocked back? Who went away?
SPORTS・2 DAYS AGO
olympics.com

Fuel The Olympic Fire: What is PR Sreejesh's diet and how did he keep himself hydrated during Tokyo 2020?

PR Sreejesh was one of the finest performers of the Indian hockey team that clinched bronze at the Tokyo 2020 Olympics. He stood like a rock under the sticks and played a crucial part in guiding India to a podium finish in the Olympics after 41 years. He made 40...
SPORTS・9 DAYS AGO
olympics.com

Team USA gymnast Jade Carey forged her own path to Olympic gold. The 21-year-old qualified her own spot to the Tokyo Games by winning the International Gymnastics Federation’s apparatus World Cup series on vault. For Carey, that spot was mathematically locked in early 2020 and allowed her to focus on peaking at the perfect moment.
SPORTS・7 DAYS AGO
The Independent

England’s Paul Casey once feared he would never play in the Ryder Cup again, but is now targeting two more appearances in the biennial contest.Casey played in Europe’s successive nine-point victories in 2004 and 2006 – famously ending one match at the K Club with a hole-in-one – as well as the defeat at Valhalla in 2008.But he was then overlooked for a wild card in 2010 by captain Colin Montgomerie despite being ranked seventh in the world at the time, and was not even a member of the European Tour for a number of years before rejoining in...
GOLF・2 DAYS AGO