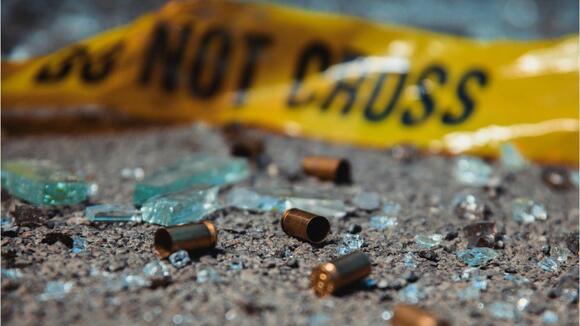 SEVIERVILLE, Tenn. — One woman is dead and another was injured when they were shot at an eastern Tennessee waterpark Saturday night, authorities said.

Updated 2:05 p.m. EDT Aug. 1: Investigators said Sarah Romine shot both victims after getting into a verbal altercation with them in the parking lot of the Soaky Mountain Waterpark, WATE reported.

Romine, 31, was arrested and charged with second-degree murder and multiple counts of aggravated assault and possession of a firearm while intoxicated, WATE reported.

Joshua Dannels, 30, was arrested and charged with possession of a firearm while intoxicated.

Victim Kelsy Cook, 24, was taken by helicopter to a hospital, where she was pronounced dead. The other victim, who suffered non-life-threatening injuries, has not been identified.

One of the women was taken to the University of Tennessee Medical Center, and the other was transported to LeConte Medical Center in Sevierville, WVLT reported.

The condition of the victims is unknown, police said.

Three people, including the alleged gunman, have been detained by police, the television station reported.

Authorities said an altercation broke out in the parking lot of the attraction, which escalated into a shooting, WBIR reported.

“We’re committed to safety and they’re working fully with the Sevierville Police Department,” a spokesperson for Soaky Mountain Park said in a statement. “It is an open investigation.”

Man arrested after stabbing another man in Butler

BUTLER, Pa. — An off-duty probation officer stopped a stabbing attack that occurred in broad daylight on Monday in Butler. The incident occurred in the 300 block of South Main Street, Butler, shortly before 2 p.m. Police said several 911 calls were made for a man who was stabbed, and...
BUTLER, PA・11 HOURS AGO
WPXI Pittsburgh

PITTSBURGH — Pittsburgh Police detectives and officers with the University of Pittsburgh Police arrested a man in connection with a series of prowling incidents in and around the campus. Police said Erik Demarco, 36, was arrested Tuesday and faces a number of charges including:. Two counts of felony criminal trespass.
7 HOURS AGO

Police: Allegheny County man assaulted girlfriend with sickle, tied her up and hid her under tarp

ELIZABETH TOWNSHIP, Pa. — An Elizabeth man is behind bars after police say he assaulted his girlfriend with a grass cutting sickle, tied her up, and hid her under a tarp. Elizabeth Township Police responded to a call about a woman under a tarp yelling for help on Atlantic Avenue on August 29. After the officers were on their way, they received more information that a man walked out of the woods and started untying the woman that was under the tarp, according to court documents.
11 HOURS AGO
WPXI Pittsburgh

NORTH PORT, Fla. — (AP) — Gabby Petito was killed by another person, a coroner concluded while also confirming that the human remains found recently at a Wyoming national park were those of the 22-year-old woman who disappeared months after she set out on a cross-country road trip with her boyfriend, the FBI said Tuesday.
NORTH PORT, FL・7 HOURS AGO
WPXI Pittsburgh

PITTSBURGH — All charges were dismissed against a City of Pittsburgh animal control officer accused of causing extensive injuries to a dog. James Genco, 46, was charged with aggravated cruelty to animals and other offenses for an incident that allegedly happened in March. Genco’s attorney, Casey White, told Channel 11...
PITTSBURGH, PA・9 HOURS AGO
WPXI Pittsburgh

RESERVE TOWNSHIP, Pa. — Police said Elwood Bartrug, wanted for a series of Millvale robberies, would ring the doorbell of homes in Reserve Township. If someone answered, he’d ask for directions. If nobody came to the door, police said that’s when he’d break in. Millvale Police told Channel 11 Bartrug...
MILLVALE, PA・6 HOURS AGO

1 injured with minor burns in fire at New Orleans Superdome

NEW ORLEANS — Authorities said a fire that sparked on the roof of the Caesars Super dome in New Orleans, the home stadium of the New Orleans Saints, was under control Tuesday afternoon. Video shared by WVUE-TV and WDSU showed the fire burning around 12:40 p.m. local time as smoke...
NEW ORLEANS, LA・11 HOURS AGO
WPXI Pittsburgh

BERLIN — (AP) — A section of highway in southern Germany was closed Tuesday because of an incident involving an apparently armed passenger on a bus. Police later said they arrested the suspect. Apart from the passenger, only the two drivers were still on board the vehicle Tuesday evening, the...
PUBLIC SAFETY・8 HOURS AGO