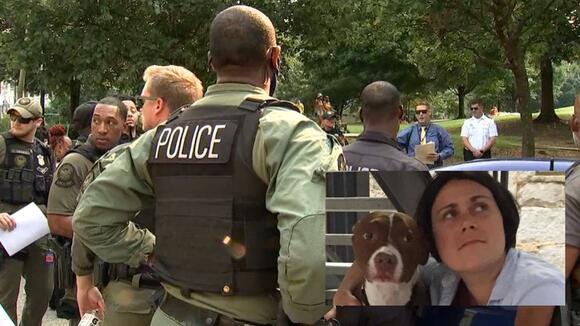 ATLANTA — Atlanta Police continue to ask for the public’s help in the search for the stabbing suspect who killed a woman and her dog in Piedmont Park.

APD spent several hours in the park Saturday afternoon searching for clues and answers in the murder case of 40-year-old Katherine Janness and her dog.

“If they were here all the time,” said Samantha Bryant. “Maybe if police were here at the time, it wouldn’t have happened.”

Janness and her dog were found stabbed to death near the entrance of the park early Wednesday morning around 1 a.m. A memorial at the park entrance continues to grow.

Investigators say Janness went for a walk with her dog after visiting her wife at work. When she did not return home, her spouse pinged her phone and found Katherine and her dog dead inside the park.

“It’s scary for those of us who are here all the time,” said Manuel Patino.

Piedmont Park was packed Saturday afternoon. Many stopped by to pay their respects and help police. Investigators were handing out flyers, showing the surveillance image of Janness and her dog. But some are wondering about the camera located not far from where they were found.

“As I was looking around, I see cameras,” said Mark Thevnin. “The police say they can’t talk about it but there are a lot of cameras for there to be no information about it.”

It’s unclear if the cameras nearby were working the night of the murder, an unsettling reality for so many who frequent the park.

The FBI has now confirmed that they will join APD and assist with their investigation.

Crimestoppers is now offering a $10,000 reward for anyone with information.

So the park has cameras but they’re not on? Really? What’s the purpose of having them there then? Apparently not to catch crimes and criminals! I hope they just aren’t releasing anything they have at the time.

So absolutely horrid!!!!! U aren't safe anywhere anymore. She should have had a gun AND used it!!!!!!

The police can't babysit grown people and follow your people every sec so they won't get hurt... wth

ATLANTA — Police say a man is dead and a woman is injured after a shooting outside a northwest Atlanta club Frida night. Police say they responded to reports about a person shot outside Club Crucial on Donald Lee Hollowell Parkway around 8 p.m. [DOWNLOAD: Free WSB-TV News app for...
ATLANTA, GA・3 HOURS AGO
WSB Channel 2 Atlanta

CINCINNATI — Three men were fatally shot in a Cincinnati early Saturday, authorities said. Cincinnati police said the men, who were in their 20s, were found dead after police responded to a report of gunshots at about 2:30 a.m. EDT, Capt. Steve Saunders, a police spokesperson, told WXIX. The shooting...
CINCINNATI, OH・2 HOURS AGO
WSB Channel 2 Atlanta

NORTH PORT, Fla. — The attorney for Brian Laundrie, the fiance of missing Florida woman Gabrielle “Gabby” Petito, told reporters Friday that the 23-year-old has gone missing. “Be advised, the whereabouts of Brian Laundrie are currently unknown,” the attorney said, according to WABC. “The FBI is currently at the Laundrie...
NORTH PORT, FL・12 HOURS AGO
WSB Channel 2 Atlanta

SEATTLE — Authorities arrested a 23-year-old man Thursday after he left a bag containing 15,000 fentanyl pills at a hotel in downtown Seattle and returned to retrieve it, according to police and KIRO-TV. Investigators said a housekeeper found the duffel bag left behind in a room that she was preparing for new guests on Thursday. The manager opened the bag to try to identify its owner and found “a large number of pills inside,” according to police.
SEATTLE, WA・12 HOURS AGO

DEKALB COUNTY, Ga. — Brian Smith was asleep at around 1:30 a.m. Thursday when a barrage of bullets came crashing through the walls and windows of his home on Miriam Lane. “It sounded like fireworks,” said Smith. Luckily, his girlfriend and their 18-month-old daughter were in another room. There are...
DEKALB COUNTY, GA・10 HOURS AGO
WSB Channel 2 Atlanta

LAGRANGE, Ga. — LaGrange Police said they have arrested a 14-year-old student who made threats against LaGrange High School via social media. Police said that the LaGrange Police Department, as well as administration officials at the high school, got a Snapchat message threatening a school shooting on Thursday. [DOWNLOAD: Free...
LAGRANGE, GA・19 HOURS AGO
WSB Channel 2 Atlanta

Police: Arkansas man accused of dragging 2 dogs behind vehicle was “just walking them’

NORTH PORT, Fla. — (AP) — Police in Florida said they are working with the FBI to find 23-year-old Brian Laundrie, whose girlfriend disappeared during a cross-country trek in a converted van. North Port police said late Friday that Laundrie's parents told them that they haven't seen him since Tuesday....
NORTH PORT, FL・10 HOURS AGO

DUNN COUNTY, Wis. — Authorities said the second of two suspects in the deaths of four people found shot to death in an SUV abandoned in a Wisconsin cornfield turned himself in Friday to face charges. Antoine Darnique Suggs, 38, turned himself in to police in Gilbert, Arizona, according to...
WISCONSIN STATE・13 HOURS AGO
WSB Channel 2 Atlanta

MIAMI — A Florida rapper was injured in a drive-by shooting early Friday in Miami, authorities said. SpotemGottem, 19, was shot in both of his legs and the car he was a passenger in was hit with 22 bullets on Interstate 95, the Miami Herald reported. The rapper, a Jacksonville...
FLORIDA STATE・3 HOURS AGO
WSB Channel 2 Atlanta

Suspect in deaths of 4 found in SUV surrenders in Arizona

MENOMONIE, Wis. — (AP) — A suspect in the shooting deaths of four Minnesotans who were found in an abandoned SUV in Wisconsin surrendered to authorities in Arizona on Friday. Dunn County Sheriff Kevin Bygd said in a statement that Antoine Darnique Suggs, 38, turned himself in to police in...
ARIZONA STATE・14 HOURS AGO
WSB Channel 2 Atlanta

DENVER — (AP) — A judge on Friday sentenced a former student to life in prison without parole for a 2019 shooting inside a suburban Denver high school that killed one teenager and injured eight others, telling the defendant he had shown no remorse and had failed to help a devastated community understand his actions.
DENVER, CO・11 HOURS AGO

ATLANTA — Atlanta Fire and Rescue posted a picture on social media of a veteran firefighter showing a future firefighter exactly how the job is done. In the picture posted on their Twitter page, firefighter Jimmie Brown is seen showing little Josiah Green how to do the job he hopes to one day have.
ATLANTA, GA・13 HOURS AGO
WSB Channel 2 Atlanta

NEW YORK CITY — Three tourists are facing charges in New York City after authorities said they attacked a restaurant hostess after she asked them for proof of COVID-19 vaccination -- a requirement to dine-in at establishments in the city -- according to multiple reports. The incident happened around 5...
NEW YORK CITY, NY・15 HOURS AGO