‘Who are you?’: Man strolls into Virginia woman’s home 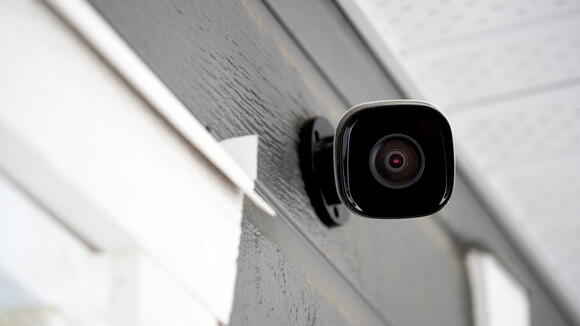 NORFOLK, Va. — A Virginia woman was startled to see a man stroll into her bedroom on Monday afternoon.

Tamara Heys, of Norfolk, said she was home sick when the man entered her home, WTKR reported. Heys admitted the front door was unlocked but was unprepared to see a stranger wearing military fatigues standing at the foot of her bed.

Heys, who was in bed and using her laptop while her dog rested on the covers, could only say, “Who are you?” according to her surveillance camera footage.

“I all of a sudden just heard something and looked up, and there was a strange man standing at the bottom of my bed,” Heys told the television station.

Heys’ home security camera shows the man casually walking into her home and making a right turn down a hallway, WTKR reported.

Right into her bedroom.

“I asked him, you know, what he was doing in my house, and he told me that someone told him that the door would be open and he could come in,” Heys told WTKR.

When Heys yelled at the man to leave the house, he turned and just as casually exited the premises.

“I would think that my reaction and most people’s would be, ‘Oh my gosh, you know, I’m so sorry,” Heys told WTKR. “You know, this is a complete mistake,’ but he didn’t do that; he just turned around and didn’t say anything else.”

Heys was not hurt.

She said security cameras and lights were installed at her home after her husband’s car was broken into three different times. Heys just did not expect someone simply walking into her home during the day.

“I would have never thought something like this would happen, period, let alone at 1 o’clock in the afternoon on a Monday,” Heys told WTKR.

ATLANTA — (AP) — A man already sentenced to life in prison after pleading guilty to fatally shooting four people at a massage business outside Atlanta is set to enter a plea to shooting four others on the same day at two spas inside the city. Robert Aaron Long, 22,...
ATLANTA, GA・6 HOURS AGO
WPXI Pittsburgh

PENN HILLS, Pa. — A teen was shot multiple times in the parking lot of a BP gas station in Penn Hills Monday afternoon. The 17-year-old boy was shot as many as four times in the lot at the corner of Frankstown Road and Robinson Boulevard, next to the Penn Hills Volunteer Fire Department, at around 4:30 p.m. He was eventually rushed to a nearby hospital in critical condition with gunshot wounds to his torso.
PENN HILLS, PA・12 HOURS AGO
WPXI Pittsburgh

JOPLIN, Mont. — The identities of all three victims killed Saturday in the derailment of a westbound Amtrak train near Joplin, Montana, have been identified by local authorities. The victims include 72-year-old Marjorie Varnadoe and 74-year-old Donald Varnadoe, a retired Georgia couple; and Zach Schneider, 29, of Fairview, Illinois, who...
JOPLIN, MT・13 HOURS AGO
WPXI Pittsburgh

PITTSBURGH — At least a dozen staff members at the Avalon Veterinary Hospital have left the practice in the last several months because of burnout. “When you’re full and when you are at capacity, there’s only so much you can physically do,” said Avalon’s practice manager Tawnya Roman. So what’s...
AVALON, PA・14 HOURS AGO
WPXI Pittsburgh

ATLANTA — (AP) — A herd of goats brought in to clear weeds got loose Monday, briefly becoming a thorn in the side of Atlanta's tony Buckhead neighborhood. Atlanta police responded after a driver called to report the goats were wandering in the road, news outlets reported. They had been brought in to eat weeds at a nearby Kroger supermarket but got free, according to police.
ATLANTA, GA・13 HOURS AGO