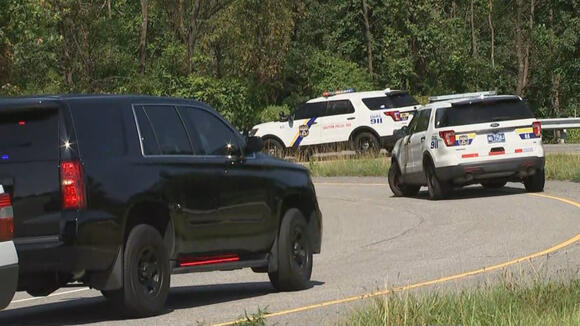 Johnston is the 26-year-old from Lower Southampton, Bucks County who was last seen three weeks ago in Philadelphia’s Chinatown section, where her cellphone was recovered.

Investigators, including a private detective, were conducting an aerial search earlier Saturday when the car was spotted.

Well I guess you know what that means and when they find the person's car but not the person usually it means that somebody that she knew has something to do with her disappearance.

I don't care what your color or social status is, you cannot afford to drop your guard today!!! you have to be on point and vigilant at all times, unfortunately that's how things are looking

Prayers to her family that I am sure is worried sick right now. They need words of comfort and not bashing accusations

Sources say the man walked into the Upper Darby Police Department saying, "You want to talk to me because I want to talk to you about killing my girlfriend."
MONTGOMERY COUNTY, PA・1 DAY AGO
CBS Boston

By: KDKA-TV News Staff ALLEGHENY TOWNSHIP (KDKA) — An investigation is underway after a body was found Friday afternoon in a Westmoreland County park. According to emergency officials, the remains were found in Northmoreland Park near Markle Road in Allegheny Township. The Westmoreland County Coroner was called to the scene. Investigators are not releasing any additional details right now. Stay with KDKA for the latest on this developing story.
WESTMORELAND COUNTY, PA・1 DAY AGO
The Baltimore Sun

A woman paid for a street sign to remember her brother who was killed. It set off a dispute in a changing Baltimore neighborhood.

Empty liquor bottles rest like grave markers on a Baltimore street corner. Here, men show their love for the departed with expensive bottles. Crown Royal whisky. Limited edition Hennessy cognac. Imported tequila. Top shelf for Anthony Covington. In the mornings, however, city crews clear out the bottles left to mark the spot where Covington was gunned down at age 27. Worse yet to his friends, ...
BALTIMORE, MD・2 DAYS AGO

COLUMBUS COUNTY, N.C. (WECT) - Heavy equipment stolen from a Chadbourn construction site in August was located in Johnston County, according to investigators with the Columbus County Sheriff’s Office. A news release states that deputies with the Columbus County Sheriff’s Office responded to a construction site in the 3000 block...
COLUMBUS COUNTY, NC・1 DAY AGO
WGAL

UPPER DARBY, Pa. (CBS) — Sources tell Eyewitness News a man went into the Upper Darby Police Department confessing to murder and then dumping the body. There are still a lot of moving parts but what CBS3 knows at this time is that a man turned himself into police in Upper Darby Thursday claiming he killed his girlfriend and dumped her body near the Schuylkill River Trail. At the time he walked in, he told authorities he thought they had a warrant for his arrest, but police sources tell us they had no clue what he was talking about. Credit: CBS3 Police held...
UPPER DARBY, PA・2 DAYS AGO

The city of Philadelphia has agreed to pay $2 million to a mother who was pulled from her SUV and beaten by cops during an anti-police brutality protest. City officials said Monday they reached an agreement with attorneys for Rickia Young, a 29-year-old North Philadelphia health care aide who was yanked out of her SUV along with her 2-year-old son and a friend’s teenage son, the Philadelphia Inquirer reported.
PHILADELPHIA, PA・2 DAYS AGO
Cleveland News - Fox 8

CLEVELAND HEIGHTS, Ohio (WJW) — A Cleveland Heights woman is missing, and police need the public’s help in locating her. The woman, Bessie Washington, reportedly walked away from her residence on Mayfield Road around 5 p.m. Wednesday and has not been seen since. She reportedly suffers from dementia and various other health issues and the police consider her to be endangered.
CLEVELAND HEIGHTS, OH・2 DAYS AGO
PennLive.com

Nine people shot, including four kids in a single incident, in Baltimore

BALTIMORE — A total of nine people were shot, including four kids in a single incident, and one person was killed in incidents across Baltimore on Tuesday, police said. Baltimore Police were called to East Baltimore just before 9:15 p.m. for a shooting. When officers arrived in the 1700 block...
BALTIMORE, MD・3 DAYS AGO
CBS Philly

PHILADELPHIA (CBS) — Eyewitness News has obtained a photo of the 6-year-old girl who was struck and injured in a hit-and-run crash in Kensington Wednesday night. Her mother, Jalisa, shared the image with CBS3. Investigators say Honesty Love was crossing East Wishart Street in Kensington after hearing gunfire. That’s when she was hit by a minivan going the wrong way. Police also believe the driver may have been trying to get away from the violence. Officials are still looking for the driver. Honesty Love is in stable condition.
PHILADELPHIA, PA・2 DAYS AGO

Baltimore County police just reported that a man was found stabbed to death near a Pikesville bus stop on Friday. Police said they were notified about a dead person near a bus stop Sept. 10 on Old Court Road near Naylors Lane. Police did not release any information about this...
PIKESVILLE, MD・4 DAYS AGO
Herald Tribune

Gabrielle Petito, 22, was reported missing to the Suffolk County Police Department by her family in New York just before 7 p.m. on Sept. 11. Authorities describe Petito as a white woman, about 5 feet, 5 inches tall, and weighing 110 pounds. She has blonde hair, blue eyes, and several tattoos, including one on her finger and another on her forearm that reads “Let it be.”
NORTH PORT, FL・4 DAYS AGO
wdac.com

EAST LAMPETER TWP. – Police in Lancaster County are searching for a missing woman. 48-year-old Theresa Stewart was last in communication with her family in July 2021 and was last known to be residing in the 2800 block of Lincoln Hwy East. Stewart is a white female, five foot nine, 125 lbs., with brown hair and blue eyes. Police say there is no evidence of foul play and none is suspected at this time. Anyone who may have any information into her whereabouts are asked to contact East Lampeter Township Police at 717-291-4676.
LANCASTER COUNTY, PA・4 DAYS AGO
nbcboston.com

A missing woman from Lowell was found after a police search in several Massachusetts communities Monday, officials said. The woman, 21-year-old Iliany Nunez, was found safe after police searches in Lowell and Chelmsford. Lowell police wrote on Facebook that "residents should be aware that they may see large numbers of...
LOWELL, MA・5 DAYS AGO
cbslocal.com

Man Found Shot To Death In Car In West Philadelphia

PHILADELPHIA (CBS) – A man was found dead in his car in West Philadelphia’s Overbrook section. Police say officers responded to 54th Street around 4:30 a.m. Sunday where they found that man shot in the head. Officials say his car was still in drive, resting on other vehicles. Police are...
PHILADELPHIA, PA・6 DAYS AGO
FOX 43

Nicole L. Gill-Schlegel may have last been seen in Hershey on Sept. 4, though her family has not seen her since Aug. 31.
ELIZABETHTOWN, PA・6 DAYS AGO
KRON4