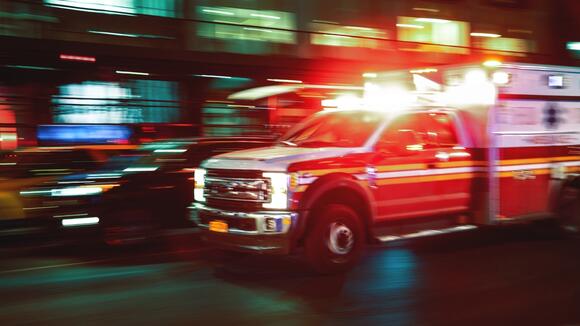 HEMPFIELD, Pa. — Fire crews and police responded to a serious car accident in Hempfield on Saturday evening, our news partners at TribLive reported.

The crash, which occurred on the 400 block of Agnew Road, was reported around 5:45 p.m.

Agnew Road was closed from Route 30 into Jeannette, according to a Westmoreland County 911 dispatcher.

The dispatcher said he did not know what caused the wreck and could not confirm whether anyone had been injured.

Reports from the scene indicated that the vehicle went over an embankment and landed upside down in a creek.

Police: Allegheny County man assaulted girlfriend with sickle, tied her up and hid her under tarp

ELIZABETH TOWNSHIP, Pa. — An Elizabeth man is behind bars after police say he assaulted his girlfriend with a grass cutting sickle, tied her up, and hid her under a tarp. Elizabeth Township Police responded to a call about a woman under a tarp yelling for help on Atlantic Avenue on August 29. After the officers were on their way, they received more information that a man walked out of the woods and started untying the woman that was under the tarp, according to court documents.
ALLEGHENY COUNTY, PA・6 HOURS AGO
WPXI Pittsburgh

RESERVE TOWNSHIP, Pa. — Police said Elwood Bartrug, wanted for a series of Millvale robberies, would ring the doorbell of homes in Reserve Township. If someone answered, he’d ask for directions. If nobody came to the door, police said that’s when he’d break in. Millvale Police told Channel 11 Bartrug...
MILLVALE, PA・2 HOURS AGO
WPXI Pittsburgh

Millvale Police offer $1,000 reward for information on men suspected of ripping down flags

MILLVALE — The Millvale Police Department is offering a $1,000 reward for information leading us to the correct identity of the two males that ripped multiple American Flags down and dragged them on the ground damaging the flags, poles and mountings. Millvale Police Chief Komoroski has also vowed to make...
MILLVALE, PA・7 HOURS AGO
WPXI Pittsburgh

Man arrested after stabbing another man in Butler

BUTLER, Pa. — An off-duty probation officer stopped a stabbing attack that occurred in broad daylight on Monday in Butler. The incident occurred in the 300 block of South Main Street, Butler, shortly before 2 p.m. Police said several 911 calls were made for a man who was stabbed, and...
BUTLER, PA・6 HOURS AGO

Not so E-Z Pass: Pennsylvania Turnpike problems with electronic tolling subject of 11 Investigation

Using an E-Z Pass is supposed to make driving the Pennsylvania Turnpike hassle free and cheaper for drivers, but 11 Investigates discovered that’s not always the case. Some customers are angry and confused after being blindsided by $10 charges on their bill called “V-tolls” or video tolls. “I looked and...
PENNSYLVANIA STATE・2 HOURS AGO
WPXI Pittsburgh

PITTSBURGH — Pittsburgh Police detectives and officers with the University of Pittsburgh Police arrested a man in connection with a series of prowling incidents in and around the campus. Police said Erik Demarco, 36, was arrested Tuesday and faces a number of charges including:. Two counts of felony criminal trespass.
PITTSBURGH, PA・2 HOURS AGO
WPXI Pittsburgh

A Pennsylvania man was jailed after he was accused of underpaying for a bottle of Mountain Dew. Police said Joseph Sobolewski stopped at a convenience store in east-central Pennsylvania last month. The store had a promotion where two, 20-oz. Mountain Dew bottles cost $3. He grabbed one bottle, put $2...
PUBLIC SAFETY・9 HOURS AGO
WPXI Pittsburgh

BERLIN — (AP) — A section of highway in southern Germany was closed Tuesday because of an incident involving an apparently armed passenger on a bus. Police later said they arrested the suspect. Apart from the passenger, only the two drivers were still on board the vehicle Tuesday evening, the...
PUBLIC SAFETY・4 HOURS AGO
WPXI Pittsburgh

PITTSBURGH — All charges were dismissed against a City of Pittsburgh animal control officer accused of causing extensive injuries to a dog. James Genco, 46, was charged with aggravated cruelty to animals and other offensive for an incident that allegedly happened in March. Genco’s attorney, Casey White, told Channel 11...
PITTSBURGH, PA・4 HOURS AGO
WPXI Pittsburgh

1 injured with minor burns in fire at New Orleans Superdome

NEW ORLEANS — Authorities said a fire that sparked on the roof of the Caesars Super dome in New Orleans, the home stadium of the New Orleans Saints, was under control Tuesday afternoon. Video shared by WVUE-TV and WDSU showed the fire burning around 12:40 p.m. local time as smoke...
NEW ORLEANS, LA・6 HOURS AGO

NORTH PORT, Fla. — (AP) — Gabby Petito was killed by another person, a coroner concluded while also confirming that the human remains found recently at a Wyoming national park were those of the 22-year-old woman who disappeared months after she set out on a cross-country road trip with her boyfriend, the FBI said Tuesday.
NORTH PORT, FL・2 HOURS AGO
WPXI Pittsburgh

No charges for police who shot anti-fascist Portland suspect

OLYMPIA, Wash. — (AP) — A Washington state prosecutor has decided not to file criminal charges against police who shot and killed an antifascist fugitive wanted in the highly publicized death last year of a right-wing demonstrator in Portland, Oregon, last year. A U.S. Marshals-led task force was trying to...
WASHINGTON STATE・6 HOURS AGO
WPXI Pittsburgh

PITTSBURGH — A section of Liberty Avenue in Pittsburgh is in for a major overhaul to make it safer and the city wants public input. This is the stretch of Liberty Avenue slated for improvement, through the Strip District corridor, from downtown Pittsburgh at 11th Street to Herron Avenue. The...
PITTSBURGH, PA・9 HOURS AGO