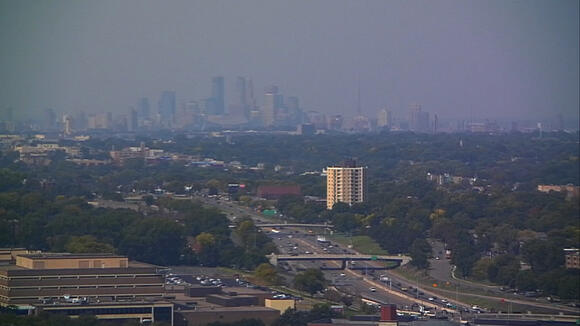 MINNEAPOLIS (WCCO) — The Canadian wildfires sending smoke our way don’t seem to be slowing down. More than 140 are burning in the northwest region of Ontario, which is directly north of Minnesota.

Three fires have the potential to spread into Minnesota, especially with the wind blowing from the north.

Flames are already burning hundreds of acres in the Superior National Forest. The forest service says none of the fires have gotten bigger over the past few days, but some new ones have popped up because of the drought conditions.

Because of the wind blowing in from the north, that wind is blowing the smoke from the fires into the state of Minnesota. Add to that the high pressure system we are going to be under the next couple days, our air quality could get even worse.

That’s forcing some Minnesotans to change their plans for the weekend.

Beaches weren’t nearly as busy as they normally are on the last weekend of July. Kristen and Glenn Walker brought their kids to Sand Point Beach on Prior Lake, and couldn’t believe how empty it was.

“I feel like it used to be wall to wall people. You had to get here early to get a parking spot and when we got here today, it was like two or three other families here max,” Kristen Walker said.

Daniel Dix, a meteorologist with the Minnesota Pollution Control, said it’s important to limit your time outside, but that means something different for each person.

“For some people, it could be 15 or 20 minutes, for some maybe a few hours. It just depends on the person. But either way, you will be impacted, especially with this situation we’ve had the last several days,” Dix said.

And with how dry it’s been this summer, we could see more smoke in our future.

“This is probably our third or fourth episode,” Dix said. “We do expect more probably at least into September, maybe October because of the number of fires in Canada. Those first big snowstorms they get in October or early November those seem to be the end of it. Thankfully.”

We’ve gotten a lot of questions about masks and if they will filter out the fine particles in the air. According to the MPCA, most likely not. Cloth masks or these disposable masks won’t help, if you have an N95 mask, it will only work if it’s properly sealed to face, or fit tested, which most people in public don’t have.

SALT LAKE CITY (ABC4)- Happy Tuesday Utah! We have some changes making their way through our area that will lead to an uptick in smoke before seeing some clearing, the chance for some isolated thunderstorms, and cooler temperatures all thanks to one weather system that moves into our area from the Pacific Northwest.
UTAH STATE・12 HOURS AGO
stlpublicradio.org

Blood-red sunsets in the Midwest are striking but ominous illustrations of new data: Parts of the Midwest are being exposed to more wildfire smoke from the West Coast and Canada compared to more than a decade ago. Experts say the impact of the smoke on health in the region is a concern.
CALIFORNIA STATE・14 HOURS AGO
iowapublicradio.org

Blood-red sunsets in the Midwest are striking but ominous illustrations of new data: Parts of the Midwest are being exposed to more wildfire smoke from the West Coast and Canada compared to more than a decade ago. Experts say the impact of the smoke on health in the region is a concern.
CALIFORNIA STATE・11 HOURS AGO
CBS Denver

DENVER (CBS4) – Temperatures are set to tumble as we close out September and head for October. We’ve had a very hot September, but October will start off much differently with below normal temperatures. (credit: CBS) A cold front will roll through on Wednesday and drop our highs from the 80s to the upper 60s for the Front Range and foothills. The mountains and western Colorado will head into the 50s and 40s! More wet weather, including the chance for snow, will mainly stay west of the Front Range on Wednesday until the evening hours. We could see some rain late in the day on Wednesday, with some snow possible in the mountains on Wednesday night above 9,000 to 10,000 feet! (credit: CBS) Rain chances decrease, but do stick around through Saturday. We expect to get moisture in the state, it just won’t be as widespread as Tuesday and Wednesday. Our temperatures remain below normal through the weekend! We won’t make it out of the 50s on Thursday. We will spend the rest of the week in the upper 60s after that.
DENVER, CO・1 HOUR AGO