‘We Are At A Pivotal Moment’: Gov. Tom Wolf Begs Pennsylvania Lawmakers To Talk To Unvaccinated Constituents 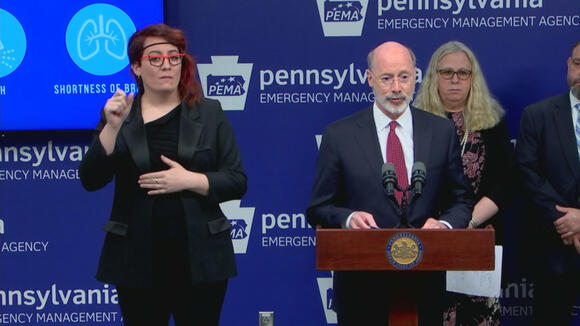 HARRISBURG, Pa. (CBS) — Pennsylvania Gov. Tom Wolf wants the General Assembly to ask their constituents to get vaccinated as the commonwealth faces a new wave of COVID-19 cases.

In a letter dated July 29, Wolf wrote the state is eighth in the number of first COVID vaccine doses administered. The state recently announced a campaign to text residents who missed their second doses. The governor also writes the state is 45th in the country for new cases.

However, the numbers are still frightening, Wolf says.

“Unfortunately, the rising tide of the Delta variant is lifting case numbers in all states, and Pennsylvania is no exception – our statewide 7-day average daily caseload has nearly quadrupled in just three weeks,” he wrote in the letter.

The governor tells General Assembly members the time is now to stop this trend in the Keystone State before it is too late.

“We are at a pivotal moment in this pandemic – a moment that has already passed in states like Arkansas, Missouri, and Louisiana – where we can either stand by as COVID evolves into a disease that hospitalizes people at rates rivaling the COVID we knew in 2020, or we can redouble our vaccination efforts and work together to protect the progress we have made and avoid the consequences of widespread infection,” he said.

The letter wraps up by asking lawmakers to talk to their unvaccinated constituents in person or even on social media.

The letter in its entirety can be viewed here .

When is this farce going to be over? This is a New World Order takeover. And it has failed. Knock off the charades & theater already. Yes, there is a virus, but it was man-made and it was released on purpose. It's death rate is low, perhaps even lower than the common flu - which basically it is. Lockdowns, the face mask mandates, etc., were all a means to get rid of Trump, destroy the American economy, and impose more control on its people, including surveillance via contact tracers, and various apps. It's also being used to impose first amendment/free speech restrictions, in a country where there's supposed to be none. Isn't there anybody not corrupt in government who will arrest these f00Is that released this, and set the situation straight!? Give us all a break already, enough with the nonsense, we know what you're doing.

Question- How many unvaccinated, unvetted illegals have been seeded into sanctuary PA cities and small towns? Transparency and common sense will help folks trying to follow the conflicting messages from leadership.

HARRISBURG, Pa. (WHTM) — Shawn Shatto took her own life in May 2019 after a long battle with depression. She received step-by-step instructions on how to do it online. Get daily news, weather, breaking news alerts straight to your inbox! Sign up for the abc27 newsletters here!. Jackie Bieber, Shawn’s...
PENNSYLVANIA STATE・7 HOURS AGO
fox8tv.com

Gov. Tom Wolf continues urging Pennsylvanians to get vaccinated against COVID-19. He was in York Monday at an upcoming COVID-19 vaccine site to encourage eligible Pennsylvanians who are not yet vaccinated to take advantage of their local community vaccine clinics. While just under 70% of adults are fully vaccinated, the...
HEALTH・1 DAY AGO
phillytrib.com

Joe Biden beat former President Donald Trump in Pennsylvania by more than 80,000 votes, according to certified results. Yet Republicans in Pennsylvania’s state Senate continue to pursue what the GOP calls a “forensic investigation” of last year’s presidential election. Democrats are right in accusing their Republican counterparts of helping to...
PENNSYLVANIA STATE・1 DAY AGO
Reading Eagle

There is no question that the motivation both in support of and in objection to a “forensic investigation” of the 2020 election in Pennsylvania is purely partisan. The Republican-controlled Senate Intergovernmental Operations Committee has voted to subpoena detailed state election records, including the names of who voted in last year’s presidential election, their birth date, address, driver’s license number, and the last four digits of their Social Security number.
PENNSYLVANIA STATE・3 DAYS AGO

Governor Tom Wolf today announced that snack manufacturer Shearer’s Foods has chosen to expand its company in Erie, creating dozens of new jobs, retaining hundreds of existing positions, and injecting millions of dollars into the local economy. “We in Pennsylvania know that our commonwealth is the best place to live...
PENNSYLVANIA STATE・5 DAYS AGO
WashingtonExaminer

Pennsylvania Gov. Tom Wolf said he would recall his Senate nomination for secretary of the commonwealth due to the "bad faith" actions by Republicans attempting to audit the 2020 presidential election results.
PENNSYLVANIA STATE・7 DAYS AGO
Pittsburgh Post-Gazette

HARRISBURG, Pa. (AP) — President Biden has declared a major disaster in Pennsylvania due to heavy rains, severe flash flooding and tornadoes in the commonwealth from the remnants of Hurricane Ida. Biden approved a request from Gov. Tom Wolf for a major disaster declaration allowing assistance to individuals for Bucks,...
PENNSYLVANIA STATE・10 DAYS AGO

HANOVER, Pa. (CBS) — Gov. Tom Wolf is announcing a new partnership that will bring COVID-19 vaccine clinics to five Pennsylvania state parks. The vaccine clinics are a partnership between DCNR and the Pennsylvania Department of Health to create additional opportunities to get the COVID-19 vaccine and help slow the spread of the potentially deadly virus. The press conference will be held at 1 p.m. and streamed on CBSN Philly above. WHAT: Gov. Wolf to Announce COVID-19 Vaccine Clinics at Five PA State Parks WHEN: Friday, September 10, 2021 TIME: 1 p.m. Online stream: Live in the player above and on your mobile and streaming device. Stay with CBSPhilly.com for updates to this developing story.
PENNSYLVANIA STATE・11 DAYS AGO
Pittsburgh Post-Gazette

Gov. Tom Wolf has ordered U.S. and commonwealth flags lowered to half-staff in honor of those who were killed in the terrorist attacks on Sept. 11, 2001. Saturday marks the 20th anniversary of the 9/11 attacks. Wolf has ordered all U.S. flags and commonwealth flags lowered to half-staff at the Capitol Complex and all state-owned facilities. The flags will be lowered from sunrise to sunset Saturday.
PENNSYLVANIA STATE・11 DAYS AGO
explorejeffersonpa.com

Gov. Wolf Praises President Biden As Other Lawmakers Plan to Push Back Against Mandates

HARRISBURG, Pa. (EYT) – Governor Tom Wolf on Thursday issued a statement praising President Joe Biden’s announcement of sweeping new COVID-19 vaccine mandates. “I share President Biden’s commitment to ensure that as many eligible individuals as possible get vaccinated against this highly contagious and deadly virus. I’m grateful that the Biden Administration is taking strong steps to protect the public. I strongly support the efforts at the federal level to prioritize vaccinations, which further support my administration’s efforts to stop the spread of COVID-19 – efforts that are working,” Wolf said.
PRESIDENTIAL ELECTION・11 DAYS AGO
MyChesCo

HARRISBURG, PA — Members of the Wolf administration gathered yesterday at the YWCA Greater Harrisburg to raise awareness about veteran suicide, a health crisis taking the lives of about 20 veterans a day nationwide. The event was held in recognition of September being National Suicide Prevention Month. “Our veterans deserve...
PENNSYLVANIA STATE・11 DAYS AGO

Gov. Wolf asks President Biden to declare a disaster declaration in Pennsylvania in response to damage caused by Ida

Governor Wolf said the damage left by the storm meets the federal government's thresholds, and that additional steps by the White House are necessary for recovery.
PENNSYLVANIA STATE・12 DAYS AGO
fox29.com

FOX NEWS - Tom Ridge, a former governor of Pennsylvania and the first secretary of the Department of Homeland Security (DHS), recalled how America "pulled together" in the immediate aftermath of the 9/11 terror attacks, as the U.S. will commemorate 20 years since the attacks on Saturday. Ridge was governor...
PENNSYLVANIA STATE・12 DAYS AGO
CBS Philly

PHILADELPHIA (CBS) — COVID-19 numbers in the tri-state region continue to increase. Nearly 4,400 new cases were reported in Pennsylvania on Wednesday. Gov. Tom Wolf was in Norristown on Wednesday morning talking up the state’s new school mask mandate that went into effect on Tuesday. Even with mask mandates in place, doctors are expecting to see a jump in COVID cases among children, but the governor is hoping masks will help keep the numbers under control and schools open. “We want to keep kids in the classroom this year, especially after the disruptions of last year,” Wolf said Wednesday. Wolf was at Hancock Elementary...
PENNSYLVANIA STATE・13 DAYS AGO
6abc Action News

Bridgeport was one of many locations in Montgomery County that was hit hard by the remnants of Hurricane Ida last week.
MONTGOMERY COUNTY, PA・13 DAYS AGO

NORRISTOWN, Pa. (CBS) — Pennsylvania Gov. Tom Wolf will visit Bridgeport Wednesday to tour the damage from the remnants of Ida. You can watch it on CBSN Philly beginning at 2:30 p.m. WHAT: Wolf to visit ​areas​ impacted by the remnants of Ida in the Borough of Bridgeport. WHEN: Wednesday,...
PENNSYLVANIA STATE・13 DAYS AGO
cbslocal.com

HARRISBURG (KDKA) – Pennsylvania Governor Tom Wolf ordered the Commonwealth flag to fly at half-staff in honor of a Washington County firefighter. Fire Police Captain Laron Holcomb of the Ellsworth Volunteer Fire Department died on Saturday. According to our news partners at the Pittsburgh Post-Gazette, he died several hours after...
WASHINGTON COUNTY, PA・13 DAYS AGO
northwestgeorgianews.com

Gov. Tom Wolf and teachers say kids are cool with masks: ‘It feels like an adult problem’

PHILADELPHIA — Wearing masks all day isn’t a big deal for Brooke Vaught’s 375 students. They compliment each other on their cool choices — bright colors, Batman, funky designs — they put them on, and get down to the business of learning. ”We haven’t had any issues,” said Vaught, principal...
EDUCATION・13 DAYS AGO
WGAL

Gov. Tom Wolf holds news conference on getting back to school safely

NORRISTOWN, Pa. — Gov. Tom Wolf held a news conference Wednesday afternoon at Hancock Elementary School in the Norristown Area School District about getting back to school safely amid the COVID-19 pandemic. "Back to school is an exciting time as many of our teachers and students return to the classroom...
NORRISTOWN, PA・13 DAYS AGO