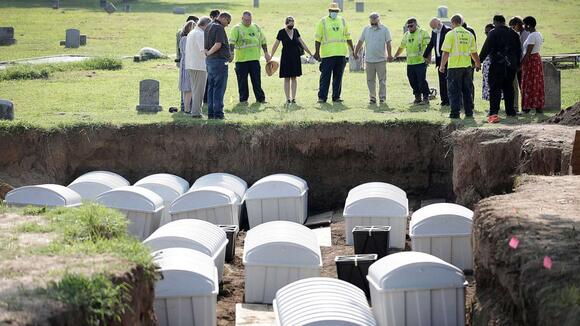 Protesters gathered outside an Oklahoma cemetery on Friday to decry the reburial of remains exhumed earlier this summer that could be linked to the 1921 Tulsa Race Massacre .

The remains of 19 people exhumed from Oaklawn Cemetery in Tulsa were reinterred Friday in the same place they were found. The remains were exhumed as a part of a city effort to find unmarked burials from the violent event -- which happened 100 years ago -- when a white mob stormed the Greenwood District of Tulsa, a predominantly Black area dubbed "Black Wall Street" on May 31, 1921. The mob destroyed and burned 35 city blocks of the thriving Black neighborhood to the ground.

Oklahoma originally recorded 36 deaths in the brazen attack, but a 2001 commission reported the number was as high as 300.

However, dozens of protesters had gathered to denounce the Friday reburial without a proper funeral ceremony. The burial process was closed to the public.

"It's disgusting and disrespectful that these are our family members and we are outside of the gate and they are inside of the gate where they are," Bobby Eaten, a descendant of a massacre victim, said to ABC Tulsa affiliate KTUL .

The city of Tulsa told ABC News that the reburial went on as planned based on a proposal presented to a public oversight committee that was approved in March, "as on-site forensic analysis, documentation and DNA sampling were complete."

Further, the city had to abide by permit requirements filed with the state's Department of Health and the Tulsa County District Attorney's Office, which required the remains be temporarily interred at Oaklawn Cemetery. An internment plan was required before moving forward with the excavation.

City spokeswoman Michelle Brooks told ABC News that the city remains "committed to transparency during this investigation" and research experts will report their findings from the excavation this fall as well as recommendations for next steps.

All public oversight committee members, the physical investigation team and North Tulsa clergy involved with the exhumation were invited to the reburial, Brooks said.

Brooks said analysis will be done on the remains to determine if they are massacre victims.

"If they are, then we will want to try to match DNA with descendants and let descendants decide where they want them to be buried. If they can't be identified, we would work to establish a permanent memorial," Brooks said.

While on-site forensic analysis and DNA sampling from the remains are complete, she noted DNA matching with potential descendants could take years.

There are two more sites the city is looking at for possible massacre victim remains, KTUL reported.

where is the proof that these are the remains of the riot (massacre)? what about the remains found last year? ... many questions need to be answered.

and really what purpose did digging up these bones serve ? was there a new trial ? what did the old bleached bones have to say ?

Lets worry about the dead from 100 years ago while our neighbors are dropping dead from this man made virus.

DALLAS -- A San Antonio doctor who said he performed an abortion in defiance of a new Texas law all but dared supporters of the state's near-total ban on the procedure to try making an early example of him by filing a lawsuit — and by Monday, two people obliged.
TEXAS STATE・10 HOURS AGO
The Associated Press

Pfizer said Monday its COVID-19 vaccine works for children ages 5 to 11 and that it will seek U.S. authorization for this age group soon — a key step toward beginning vaccinations for youngsters. The vaccine made by Pfizer and its German partner BioNTech already is available for anyone 12...
PUBLIC HEALTH・1 DAY AGO
Reuters

Sept 21 (Reuters) - Medical examiners in North Port, Florida, were scheduled to conduct an autopsy on Tuesday on a body found in Wyoming, seeking to determine if it is Gabby Petito, the 22-year-old "van life" traveler whose disappearance has gripped Americans. The examination of the remains, which were discovered...
PUBLIC SAFETY・5 HOURS AGO
ABC News

Two people are being treated for gunshot wounds following a shooting at Heritage High School in Newport News, Virginia, according to police. Their injuries are not considered life-threatening and a suspect was in custody later in the day, investigators said. Students at the high school were evacuated and sent to...
VIRGINIA STATE・16 HOURS AGO

Democrats look for Plan B after blow on immigration

Democrats and immigration advocates are ready to pitch a Plan B after the Senate parliamentarian spiked a Democratic proposal aimed at providing a pathway to citizenship for millions of people. Senate Parliamentarian Elizabeth MacDonough, a former immigration lawyer, shut down the possibility of granting 8 million people the right to...
CONGRESS & COURTS・1 HOUR AGO
The Associated Press

DEL RIO, Texas (AP) — The options remaining for thousands of Haitian migrants straddling the Mexico-Texas border are narrowing as the United States government ramps up to an expected six expulsion flights to Haiti Tuesday and Mexico began busing some away from the border. More than 6,000 Haitians and other...
TEXAS STATE・7 HOURS AGO
Fox News

Utah park ranger reportedly warned Petito that relationship appeared ‘toxic’. Melissa Hulls, a ranger at Arches National Park who responded to the Aug. 12 altercation in Utah between Petito and Laundrie, told the Deseret News that she warned Gabby her relationship had the markings of being “toxic.”. “I was imploring...
PUBLIC SAFETY・6 HOURS AGO
NBC News

WASHINGTON — The Biden administration will require all international travelers coming into the United States to be fully vaccinated and tested for Covid-19 under a new system that will open up air travel to vaccinated foreign nationals from dozens of countries for the first time since the early days of the pandemic.
U.S. POLITICS・20 HOURS AGO

KIGALI, Rwanda (AP) — The man who inspired the film “Hotel Rwanda” for saving hundreds of his countrymen from genocide was convicted of terrorism offenses Monday and sentenced to 25 years at a trial that human rights watchdogs and other critics of Rwanda’s repressive government have described as an act of retaliation.
PUBLIC SAFETY・17 HOURS AGO
ABC News

Seven survivors of a shooting at a university in central Russia that left six people dead and 28 more wounded are to be airlifted to Moscow for medical treatment on Tuesday, according to a top education official
PUBLIC SAFETY・1 HOUR AGO