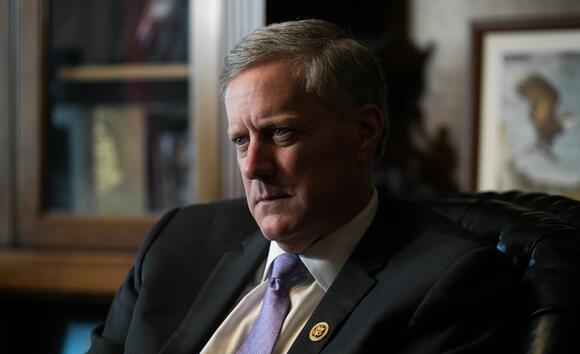 Mark Meadows , who was Trump's final White House chief of staff, said the work at Trump National Golf Club in Bedminster, New Jersey, is focused on "what comes next" with regards to 2022 and 2024 elections , after which Newsmax host Steve Cortes (himself a former Trump adviser) asked whether he wanted to break any news about his meetings with the former president.

"We met with several of our Cabinet members tonight," Meadows said. "We actually had a follow-up member — meeting with some of our Cabinet members, and as we were looking at that. We were looking at what does come next. I’m not authorized to speak on behalf of the president, but I can tell you this, Steve: We wouldn’t be meeting tonight if we weren’t making plans to move forward in a real way, with President Trump at the head of that ticket."

Meadows did not name anyone involved in the meetings, but his use of the term "Cabinet" is making some waves at a time when some Trump allies claim, without presenting evidence for a real path forward, that the former president can be reinstated in the White House, including My Pillow CEO Mike Lindell .

"I can’t stop thinking about this interview. The former chief of staff is talking as if there’s a shadow presidency going on (there isn’t) at a time when there’s a conspiracy theory that Trump will be reinstated (he won’t) and as Trump has urged some advisers to keep saying it," tweeted New York Times reporter Maggie Haberman .

Trump has publicly insisted the 2020 election was stolen due to widespread fraud, and after lawsuits challenging the results of the contest were roundly thrown out by the courts, he has been cheering on a GOP push to conduct "forensic" audits in states such as Arizona and Pennsylvania — even as federal, state, and local officials assert the election was bereft of maleficence that would overturn the results.

The whole republican party is imploding...they still haven't learned a thing. Trump will bring you down so low that you'll never get out.

Meadows is an embarrassment to the good folks of Western North Carolina. His future will forever be linked with the criminal President.

So basically Trump is playing President like he did for his first term. 😄Except no one listens to him now any more than they did then.

President Joe Biden will not shield Donald Trump's records from the congressional committee investigating the Jan. 6 riot at the U.S. Capitol by invoking executive privilege, White House press secretary Jen Psaki said Friday. Asked about Trump's assertion that he would fight subpoenas from the Jan. 6 Select Committee by...
POTUS・3 DAYS AGO
WEKU

To sue the New York Times and his niece, Trump turned to a low-profile attorney from New Jersey

Earlier this month, one of former president Donald Trump’s best-known attorneys — veteran litigator Marc E. Kasowitz — withdrew from a case in which Trump had been sued for alleged defamation. Trump replaced him with a lower-profile lawyer: Alina Habba, from a four-attorney firm with offices near Trump’s Bedminster, N.J.,...
POTUS・4 DAYS AGO
WashingtonExaminer

Former President George W. Bush is getting the band back together next month for a fundraiser for embattled Wyoming Rep. Liz Cheney in an effort to take the Republican Party back from former President Donald Trump.
PRESIDENTIAL ELECTION・1 DAY AGO
Fox News

Former President Trump’s endorsement is hands-down the most sought after in the Republican Party, and Trump isn’t disappointing. The former president – eight months removed from the White House – remains extremely popular and influential with Republican voters and politicians as he aims to continue playing a kingmaker’s role in the GOP.
PRESIDENTIAL ELECTION・6 DAYS AGO
Newsweek

Texas Gov. Greg Abbott on Sunday defended his state’s decision to reexamine the results of the 2020 presidential election and rejected the idea that he was merely bowing to the wishes of former President Donald Trump. “There are audits of every aspect of government,” he said on “Fox News Sunday.“...
TEXAS STATE・22 HOURS AGO
MarketWatch

Lawmakers have just days to head off a partial federal government shutdown. Here's what happens if they can't.
WASHINGTON, DC・9 HOURS AGO
The Guardian

Fired Fox News Digital Politics Editor Chris Stirewalt, who played an instrumental role in calling Arizona for President Joe Biden before any other broadcast network, discussed the results of the Arizona election audit on Sunday, telling CNN’s Jim Acosta that he takes “no satisfaction or pleasure from seeing this outcome that roughly correspondents with the real results.”
ARIZONA STATE・20 HOURS AGO

Liz Cheney Says She ‘Absolutely’ Can Win Reelection: ‘A Vote Against Me’ Is A Vote For ‘Somebody Who’s Put Allegiance to Trump Above Allegiance to the Constitution’

Rep. Liz Cheney (R-WY), who was ousted from House leadership over her criticism of former President Donald Trump, said she could “absolutely” win reelection during a Sunday interview with 60 Minutes. In polling from July, only 23% of Wyoming Republicans said they would vote for her — and another 53%...
PRESIDENTIAL ELECTION・17 HOURS AGO
Newsweek

In 2015, Trump attacked the late Senator John McCain, a former prisoner of war, by saying, "I like people who weren't captured."
PRESIDENTIAL ELECTION・1 DAY AGO
The Independent

Rep. Liz Cheney says she was wrong to oppose gay marriage in the past, a stand that once split her family.Cheney, R-Wyo., a fierce critic of fellow Republican Donald Trump also tells CBS News' “60 Minutes” that she views her reelection campaign as the most important House race in the nation as forces aligned with the former president try to unseat her. She voted to impeach Trump over his role in the Jan. 6 riot at the U.S. Capitol.In the interview aired Sunday night, Cheney said she had little affection for President Joe Biden who she believes...
SOCIETY・23 HOURS AGO
Ohio Capital Journal

President Joe Biden's $4 trillion bid to change America is in genuine danger as deep divides among Democrats threaten to gut his domestic agenda and demoralize the party before congressional elections that could hand power to Donald Trump's Republicans. Biden is trying to spend huge sums to hand more of...
PRESIDENTIAL ELECTION・19 HOURS AGO
13WMAZ

PERRY, Ga. — Thousands of people decked out in Make America Great Again hats and American flags came to the Georgia National Fairgrounds in Perry Saturday to see a pro-Trump slate of candidates and the former president in his first visit to Georgia since January. The candidates include the latest...
GEORGIA STATE・1 DAY AGO
MSNBC

When Trump says the U.S. 'will not survive,' don't look away

It was an opinion that was designed to raise eyebrows — and it worked. The Washington Post published an op-ed late last week from Robert Kagan, a conservative at the Brookings Institution, with a headline that read, "Our constitutional crisis is already here." Kagan's first sentence read, "The United States...
POTUS・6 HOURS AGO
The Independent

Fox News Sunday host Chris Wallace sparred with Texas’ Republican governor over his state’s new ban on abortion after six weeks into the pregnancy, even in the case of rape or incest.Speaking with Greg Abbott via satellite on Sunday, Mr Wallace questioned whether it was “reasonable” to only allow a rape victim six weeks from the point of first becoming pregnant to decide to obtain an abortion and go through with scheduling and receiving the procedure, which for many women can mean a long journey to one of the state’s few clinics.“Is it reasonable to say to somebody who...
ENTERTAINMENT・1 DAY AGO