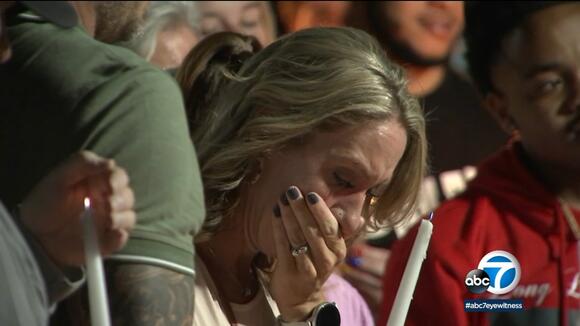 An emotional candlelight vigil was held Saturday night to honor two teens who were killed in an apparently random shooting at a Corona movie theater. The vigil was held just hours after the second victim, 19-year-old Anthony Barajas, was taken off life support and declared dead. Barajas and Rylee Goodrich, 18, were found late Monday by theater employees after a 9:35 p.m. showing of "The Forever Purge." They had each been shot in the head, "execution style," sources told ABC7. Goodrich died at the scene. Barajas was taken to a hospital, where he remained on life support until Saturday. His organs were donated to save others before he was removed from life support. "I want to thank everyone who lifted Anthony in prayer," Malik Earnest, a friend of Barajas, said on Twitter. "The injuries to his brain were irreparable. July 30th at 11 p.m., Anthony was wheeled down an 'honor walk' where he would ultimately donate his organs so others may live." Hundreds of people attended the candlelight vigil held at the movie theater where the shooting occurred. "I know the biggest thing she would want is just to have everybody together," said Skylar Schueller, a friend of Goodrich. "I think she's looking down on us now and I think she's smiling." Friends say Goodrich and Barajas had just recently started dating. Corona police detectives identified 20-year-old Joseph Jimenez as a suspect and arrested him Tuesday. Initially charged with murder and attempted murder, Jimenez appeared in Riverside County Superior Court Friday but didn't enter a plea and his arraignment was continued to next week. Corona movie theater shooting: 'Look at me!' victim's father yells at suspect in courtroom outburst

The man accused of fatally shooting an 18-year-old woman and wounding her friend at a Corona movie theater appeared in court, where he was verbally confronted by the woman's father.

After Barajas' death was announced, the Police Department said it was working with the Riverside County District Attorney's Office to add an additional count of first-degree murder against the defendant. Vigils were held Friday in honor of the two victims, including an outpouring of emotion at New Beginnings Community Church in Norco where Goodrich was remembered. Her heartbroken parents were joined by dozens of her friends. They shared memories of a kind, caring teenager who always wanted to make others happy. "Everywhere you went, she lit up the room with her smile," said Alex Apatiga, a former high school classmate. "She was always nice to everybody." Another large crowd attended a vigil for Barajas at Santa Ana's Mater Dei High School, where he was a standout soccer player. Barajas was a popular TikTok personality with more than 960,000 followers. There was no known connection between the victims and the alleged gunman, authorities said. Suspect arrested in Corona movie theater shooting during showing of 'The Forever Purge'

A suspect has been arrested in the deadly movie theater shooting in Corona that left Rylee Goodrich dead and a TikTok influencer on life support.

"Based on the evidence provided to our office, this appears to be a random and unprovoked attack," the Riverside County District Attorney's Office said in a statement. Jimenez's court appearance on Friday was marked by a dramatic verbal confrontation. After the hearing ended, the suspect was walking toward an exit and passed Goodrich's father, who yelled at him: "Hey, look at me, bro! Look at me! Look at me, dude! That was my ..." His voice trailed off as he sobbed and was comforted by a friend. While searching Jimenez's home, police seized a firearm that "matched the caliber of the weapon used in the murder" and a wallet belonging to Goodrich, authorities said. Jimenez did have a movie ticket to the same showing of "The Forever Purge" that the victims attended, investigators said. GoFundMe pages have been created in honor of Goodrich and Barajas .

I don't know what a public defender could say to get me not to vote for the death penalty, if I were on the jury in this case.

After being unable to walk for nearly two months, the victim of a hit-and-run in Downtown L.A. is now working with the LAPD to track down the suspect,
LOS ANGELES, CA・1 DAY AGO
ABC7

Two missing boys, who had last been seen in Altadena, were later found, according to the Los Angeles County Sheriff's Department.
ALTADENA, CA・1 HOUR AGO
ABC7

A leader of Black Lives Matter Los Angeles who was targeted in a swatting incident last year was the victim of another apparent false emergency call Thursday, authorities said.
LOS ANGELES, CA・43 MINUTES AGO

A man and his father were arrested at a home in East Los Angeles in connection with three separate murders that date back as far as 2014, authorities said.
LOS ANGELES COUNTY, CA・1 DAY AGO
ABC7

The LAPD is investigating the brutal beatdown of a tourist that occurred on the Hollywood Walk of Fame and was captured in a bystander's disturbing video.
LOS ANGELES, CA・1 DAY AGO
ABC7

Philadelphia police released dramatic video of the vehicle being sought in a deadly drive-by shooting.
PHILADELPHIA, PA・4 HOURS AGO
ABC7

A man who pointed a rifle at sheriff's deputies was shot and wounded after a 90-minute standoff in Lancaster, authorities said.
LANCASTER, CA・1 DAY AGO

BELL GARDENS, Calif. (KABC) -- The Bell Gardens Police Department is asking for the public's help in identifying two people after video showed a man bear hug a woman and appear to force her back into a car before driving away. Police say video showed the woman exit a vehicle...
BELL GARDENS, CA・2 DAYS AGO
ABC7

LAPD to increase patrols along Melrose Avenue amid string of robberies

Local residents and business owners say they have grown increasingly concerned about a rise in brazen crime along Melrose Avenue.
LOS ANGELES, CA・1 DAY AGO
ABC7

A man was killed and four others were injured following a shooting and a crash in El Monte Monday evening, according to authorities.
EL MONTE, CA・3 DAYS AGO
ABC7

A man ran onto a runway and into the path of an airplane Wednesday morning at Hollywood Burbank Airport, prompting the temporary shutdown of the facility and suspension of all flights, authorities said.
BURBANK, CA・1 DAY AGO

Man shot and stabbed in fight at Glendale bakery

A man was hospitalized after being shot and stabbed during a fight at a Glendale bakery.
GLENDALE, CA・4 DAYS AGO
ABC7

CHATSWORTH, LOS ANGELES (KABC) -- A brush fire erupted in Chatsworth, covering the surrounding area with thick smoke as firefighters battled the blaze Wednesday afternoon. The blaze, dubbed the Jeffrey Fire, erupted near 22560 West Jeffrey Mark Court around 4 p.m. The blaze quickly grew to about five acres, and it also briefly threatened nearby homes before crews extinguished most of the flames.
LOS ANGELES, CA・1 DAY AGO
ABC7

Two men were shot in Compton overnight after what appears to be a street racing incident.
COMPTON, CA・4 DAYS AGO
ABC7

Man fatally shot in Riverside with baby in car

Someone fired a gun multiple times at a car in Riverside, killing a man inside and narrowly missing a baby in a car seat.
RIVERSIDE, CA・4 DAYS AGO
ABC7

Marine Lance Cpl. Dylan Merola, who was among the 13 American service members killed in a bombing in Afghanistan last month, was honored with a procession across Southern California on Tuesday.
RANCHO CUCAMONGA, CA・2 DAYS AGO
ABC7

New audio of the 911 call reporting a domestic dispute between Gabby Petito and her fiance, Brian Laundrie, reveals he was "slapping her," according to a witness.
UTAH STATE・3 DAYS AGO
ABC7

Searches continue for Gabby Petito and fiancé, who disappeared after returning home from road trip

As local and federal agencies search for Gabby Petito in a Rocky Mountain national park, law enforcement are also working to find her fiancé Brian Laundrie, who his family says has not been seen since Tuesday.
NORTH PORT, FL・5 DAYS AGO