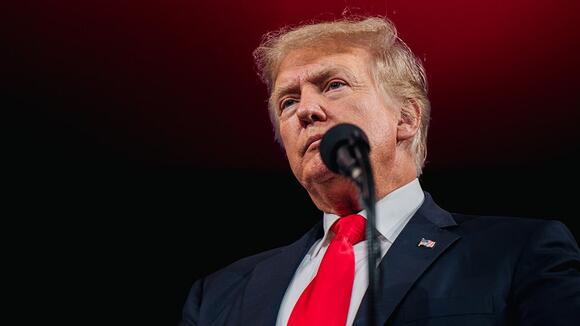 Former President Trump defended his comments to top Department of Justice (DOJ) officials about the 2020 election after notes from a call in December were released on Friday.

“Just say that the election was corrupt + leave the rest to me” and other congressional allies, Donoghue wrote that the former president said in the call.

Trump released a statement on Saturday slamming the Oversight and Reform Committee for releasing the documents and said it was wrong to describe him as attempting to “overturn the election.”

“The corrupt and highly partisan House Democrats who run the House Oversight Committee yesterday released documents—including court filings dealing with the rigged election of 2020—that they dishonestly described as attempting to overturn the election,” Trump said while repeating claims the election was “rigged” despite having no evidence for the assertion.

"In fact, it is just the opposite. The documents were meant to uphold the integrity and honesty of elections and the sanctity of our vote," he added. "The American People want, and demand, that the President of the United States, its chief law enforcement officer in the country, stand with them to fight for Election Integrity and to investigate attempts to undermine our nation."

The officials told Trump the DOJ could not investigate election fraud claims if there was no evidence of widespread election fraud, according to the notes in the documents.

Donoghue allegedly told Trump there were “dozens of investigations, hundreds of interviews” conducted by the DOJ, and no evidence of widespread voter fraud was found.

Trump has been asserting for months that the election was rigged and even called on Congress to investigate his claims in his statement Saturday, more than eight months after the election.

Trump failed in corrupting and rigging the election but failed so he blames others for doing it, it's natural for Don the king of Con to do this kind of thing.

reading some of these comments just makes me wonder how one man can get so many to follow blindly. it is one thing to be fooled by the promises and the hope that a business man can do something good and different, however after 4 years and 30,000 + lies, failed policies, high unemployment, economy in shambles, lost respect from other countrys two impeachments plus more, i dont understand how people can remain duped by this con man.

His statement is a fantastic example of somebody trying to turn chickenshit into chicken salad. The thing is, he’s no chef. And everything that he says is chickenshit.

By any fair measure, John Eastman is not a household name. But in far-right circles, he's earned a reputation as a Republican lawyer willing to make unusual arguments. Eastman's background may suggest a degree of credibility. He clerked for Supreme Court Justice Clarence Thomas, for example, before taking on prominent roles at the Federalist Society and the Claremont Institute. He was even the dean of a law school in California.
PRESIDENTIAL ELECTION・2 DAYS AGO
HuffingtonPost

Although Donald Trump’s camp has claimed the 2020 presidential election was riddled with fraud, a newly uncovered memo shows that his campaign knew soon after Election Day that many of his claims were baseless. After Trump lost the election to Democrat Joe Biden, he started fomenting a bizarre conspiracy theory...
PRESIDENTIAL ELECTION・2 DAYS AGO
MSNBC

House Democrats have reintroduced a sweeping legislative package meant to protect against the kind of presidential abuse of power Donald Trump carried out throughout his time in the White House. Passing that package might become a critical case for testing just how far Republicans have turned away from democratic norms as they continue to defer to Trump and his authoritarian political style.
PRESIDENTIAL ELECTION・2 DAYS AGO
MSNBC

Politico reports that as lawmakers were evacuated to a safe room on January 6th, Congressman Jim Jordan of Ohio was joined by Congressman Matt Gaetz of Florida and together they, "implored Trump to tell his supporters to stand down, per a source with knowledge of that call."Aug. 31, 2021.
POTUS・24 DAYS AGO

Gaetz called Twitter the "wet-market of ideas" and said the company was engaging in "domestic election interference" by fact-checking Trump's tweets.
CONGRESS & COURTS・13 HOURS AGO
MSNBC

Bob Woodward: The existence of Trump in the presidency was a national security crisis

Co-authors of the new book “Peril” Bob Woodward and Robert Costa discuss the documents, memos, and private conversation behind what amounts to a coup plot by the former president and the measures military leaders took to protect the country from himSept. 22, 2021.
POTUS・1 DAY AGO
Washington Examiner

House Speaker Nancy Pelosi mocked the possibility of former President Donald Trump running again in 2024. The California Democrat made jabs at Trump during an event at Cambridge University on Thursday when talking about the Jan. 6 riot at the Capitol. "I reference him from time to time as 'What's-his-name,'"...
PRESIDENTIAL ELECTION・7 DAYS AGO

Ivanka Trump repeatedly implored her father, then-President Donald Trump, to disavow his claims that voter fraud cost him the 2020 election as he watched news coverage of the deadly Jan. 6 riot at the US Capitol, according to a forthcoming book. Washington Post associate editor Bob Woodward and reporter Robert...
PRESIDENTIAL ELECTION・8 DAYS AGO
insidernj.com

Since Election Day 2020, Republican Gubernatorial candidate Jack Ciattarelli, in an effort to woo the Trump MAGA forces in New Jersey continuously refused to refute the Trump campaign Big Lie: That Donald Trump was the real winner of the 2020 presidential campaign and that Joe Biden stole the election from him.
PRESIDENTIAL ELECTION・9 DAYS AGO
ABC7

Candidate Larry Elder is raising questions about the integrity of the state's voting process, predicting "shenanigans" in next week's recall election.
LOS ANGELES, CA・13 DAYS AGO
The Independent

A newly released memo from a former member of Donald Trump’s legal team has shed further light on efforts to overturn the 2020 election – spelling out a plan for then-vice president Mike Pence to throw out the result in the Senate “without asking for permission”.Written by controversial conservative lawyer John Eastman, who appeared at the “Stop the Steal” rally that precipitated the Capitol insurrection on 6 January, the memo was obtained in full by CNN and is described in the new book Peril, an account of the Trump administration’s behaviour after the election. The book has generated multiple...
PRESIDENTIAL ELECTION・20 HOURS AGO

Just 247 days since President Joe Biden took the keys to the Oval Office, a majority of people appear to want him evicted and former President Donald Trump back.
PRESIDENTIAL ELECTION・20 HOURS AGO
Washington Examiner

Several true but easy conclusions suggest themselves regarding two stories out this week about the Trump campaign’s attempts to overturn last year’s presidential election. Rather than just look backward, though, let’s focus forward toward a cure. The cure would be one that everybody on the political spectrum should agree on,...
PRESIDENTIAL ELECTION・22 HOURS AGO
Fox News

Rep. Cathy McMorris Rodgers (R-WA) joined Fox News Radio’s Guy Benson Show to discuss the struggle for Democrats on Capitol hill to whip votes to pass Biden administration agenda items in Congress. Rep. McMorris Rodgers said,. “I have been thinking about the times when the Republicans were in the majority...
CONGRESS & COURTS・15 HOURS AGO
6abc

Since his loss last November, Trump and his allies have been fixated on false claims of widespread electoral fraud.
TEXAS STATE・6 HOURS AGO
The Associated Press

WASHINGTON (AP) — The Biden administration will have a big say in whether the government releases information to Congress on the actions of former President Donald Trump and his aides on Jan. 6. But there could be a lengthy court battle before any details come out. The House committee investigating...
WASHINGTON, DC・11 HOURS AGO
Business Insider