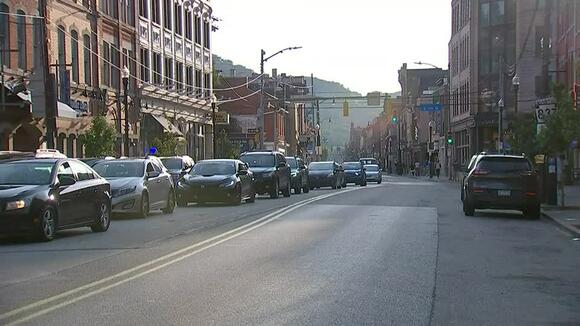 PITTSBURGH — It’s been pretty busy here in South Side. But as we’ve seen more people coming to East Carson Street over the summer — especially on the weekends — it’s led to a rise in crime.

However — just hours after those measures were put into effect — there was yet another incident here last night.

Early this morning — at around 2:40 a.m. — officers were called to Wharton Street in South Side where a man with multiple gunshot wounds was found in a parking lot.

We’re told he was rushed to the hospital, and — at last check — he’s in critical condition.

“There was an altercation in the vehicle, and somebody tried to intervene, and sadly they were shot. You know, this is just another example of senseless violence that’s going on,” Pittsburgh Police Chief Scott Schubert said.

Following violence week after week, city leaders say they need to clear people out of the area and make room for officers and emergency responders to get through, if needed.

So starting at 7 p.m. on Fridays and Saturdays, inbound East Carson street will be closed from South 10th to South 18th streets. Uber and Lyft drivers will not be allowed in that stretch for pick-up or drop-off.

“We can’t be everywhere. But trying to be as visible as possible, we put additional lighting in places, so we are going to do everything we can to keep people safe,” explained Chief Schubert.

Last night, it didn’t take long for cars to be towed and tickets to be written for violators. Neighbors say they’re hopeful these initiatives will help.

“I think shutting down the street will be much safer for the people who come down here at nighttime to hang out,” explained South Side resident Sylvia Beach.

However, some business owners are nervous they will lose customers over this closure.

“I think it’ll hurt because people come by here — they see it. If they have to go one way, they’ll have to go all the way to the other end to turn around and park, and say ‘Hey, it’s not worth it,’” Dave Root, a business owner in the area said.

Public safety leaders are pleading for patience, saying the South Side cannot be scarred by any more violence without giving this a shot.

The Pittsburgh police chief also said that college students are coming back in the fall will be a factor and they are already making plans for that.

3 dismembered bodies, including a child, found in burning Texas dumpster

FORT WORTH, Texas — Three dismembered bodies were found in a burning dumpster on Wednesday, Fort Worth police confirmed. The grisly discovery was made by Fort Worth firefighters responding to the dumpster fire at around 6:15 a.m., KXAS reported. Police confirmed that one victim appeared to be a child, and...
TEXAS STATE・9 HOURS AGO
WPXI Pittsburgh

PITTSBURGH — Pittsburgh River Rescue responded to the area of the 10th Street bridge on the South Side of the Monongahela River for reports from the Fish and Boat Commission of a male who was observed going under the water before 1:45 p.m. River Rescue divers retrieved a male victim...
PITTSBURGH, PA・13 HOURS AGO
WPXI Pittsburgh

COLORADO SPRINGS, Colo. — A 6-year-old Colorado girl who died after falling from a theme park ride three weeks ago was not wearing seat belts, and operators of the vertical drop attraction did not properly check her restraint, according to a state investigation. According to investigators with the Colorado Department...
COLORADO STATE・13 HOURS AGO
WPXI Pittsburgh

SLIDELL, La. — Human remains found inside the stomach of a 12-foot alligator have been positively identified as a 71-year-old Louisiana man, attacked in floodwaters after Hurricane Ida moved through the Slidell area. According to St. Tammany Parish Coroner Dr. Charles Preston, the remains belonged to Timothy Satterlee Sr., who...
LOUISIANA STATE・13 HOURS AGO

At least 3 dead in Amtrak train derailment in Montana

JOPLIN, Mont. — (AP) — At least three people were killed Saturday afternoon when an Amtrak train that runs between Seattle and Chicago derailed in north-central Montana, toppling several cars onto their sides, authorities said. The westbound Empire Builder train derailed about 4 p.m. near Joplin, a town of about...
MONTANA STATE・5 HOURS AGO
WPXI Pittsburgh

ARMSTRONG COUNTY, Pa. — Just a shell of a building is all that is left of the Brookview Country Manor personal care home that is now being demolished. We were told five people were inside when the building caught fire and the chief has pinpointed a cause. Heavy equipment is...
ARMSTRONG COUNTY, PA・17 HOURS AGO