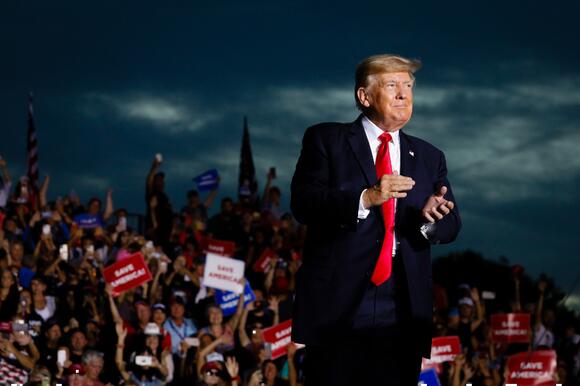 Former President Trump helped Republicans raise $56 million in the first six months of 2021, underscoring his continued sway within the GOP.

This includes more than $34 million from the Trump Make America Great Again Committee, which raises money for the GOP and fundraising groups controlled by the former president, and more than $21 million for Trump’s own fundraising committees and groups.

In total, WinRed reported handling more than a quarter of a billion dollars raised for Republicans in the first half of the year.

The New York Times noted that the fundraising slowed over the course of the year.

Trump raised $13.8 million through the Make America Great Again Committee after the Jan. 6 Capitol attack and subsequent impeachment as his days in the White House came to an end. But by June, the number shrank to $2.6 million.

Much of the money from the Trump Make America Great Again Committee came from the recurring donation program, the newspaper noted. An official familiar with the matter told the Times that party officials had stopped the recurring withdrawals as of this month.

The numbers underscore Trump’s influence over the party, as he was the strongest online fundraiser of any Republican politician. Sen. Tim Scott (R-S.C.) followed behind the former president, raising $7.8 million online. Scott delivered the GOP response to President Biden 's joint address to Congress in April.

Trump didn't raise$56 Million for the GOP,Trump raised $56 Million in Order to Pay his Lawyers and Pocket Miney.

And didn’t spend one dime on his “fraudits” or court cases or anything to help prove “a stolen election” Gee. Wonder why that is? Because he knows he lost and there’s no evidence to find. Such a fraud. Keep sending him your money, dupes. Smh

Trump continues his ego trip begging for money and growing more insignificant and irrelevant every day.

Former President Trump’s endorsement is hands-down the most sought after in the Republican Party, and Trump isn’t disappointing. The former president – eight months removed from the White House – remains extremely popular and influential with Republican voters and politicians as he aims to continue playing a kingmaker’s role in the GOP.
PRESIDENTIAL ELECTION・2 DAYS AGO
Washington Post

In June, former Treasury Secretary Steven Mnuchin visited Israel to scout investments for his new company, then flew to Qatar for a conference. At the time, Mnuchin had been out of office for five months. But, because of an order given by former president Donald Trump, he was still entitled...
POTUS・7 DAYS AGO
Boston Globe

For those who pay more than lip service to democracy, and thus realize both its value and fragility, one barometric question this year has been whether the Republican Party will come to its senses regarding Donald Trump and Trumpism. Over the last half-decade, it was disquieting to watch as one...
PRESIDENTIAL ELECTION・9 DAYS AGO
Axios

The Senate Republicans' campaign arm raised $8 million last month, a new record for the group during the August of an off-year, Axios has learned. Why it matters: The National Republican Senatorial Committee saw a spike in donations following criticism of the U.S. withdrawal from Afghanistan and amid the rising cases in COVID-19. It's also reporting a record number of new donors, and saw the biggest digital fundraising month so far this cycle.
PRESIDENTIAL ELECTION・9 DAYS AGO

Former Missouri governor Eric Greitens (R), who is running for Senate, said Tuesday that if he wins next year, he will not support Senate Minority Leader Mitch McConnell (R-Ky.) as former president Donald Trump tries to oust the GOP party leader. Since announcing in March that he will run for...
PRESIDENTIAL ELECTION・2 DAYS AGO
POLITICO

The House panel probing the Capitol attack is readying a wave of subpoenas and already getting results from its document requests.
DALLAS, TX・12 HOURS AGO
The Conversation U.S.

A recent Washington demonstration supporting those charged with crimes for the Jan. 6 insurrection at the U.S. Capitol fizzled, with no more than 200 demonstrators showing up. The organizers had promised 700 people would turn out – or more. But the threat from far-right insurrectionists is not over. For months,...
PRESIDENTIAL ELECTION・21 HOURS AGO

Just 247 days since President Joe Biden took the keys to the Oval Office, a majority of people appear to want him evicted and former President Donald Trump back.
PRESIDENTIAL ELECTION・20 HOURS AGO
UPI News

WASHINGTON, Sept 22 (Reuters) - Negotiations in the U.S. Congress to tighten police practices following the 2020 murder of George Floyd in Minneapolis have collapsed, Democratic Senator Cory Booker said on Wednesday, as President Joe Biden blamed Republicans for the failure. The end of congressional negotiations, at least for now,...
CONGRESS & COURTS・1 DAY AGO
WashingtonExaminer

House Democrats introduced legislation on Tuesday that aims to curb presidential powers by addressing a laundry list of issues and complaints that came up during former President Donald Trump’s norm-shattering presidency.
PRESIDENTIAL ELECTION・2 DAYS AGO

The House passed a stopgap government funding bill paired with an increase in the federal borrowing limit that will likely face a GOP filibuster in the Senate.
CONGRESS & COURTS・2 DAYS AGO
Newsweek

"The Republican Party will not get better unless you stand up," the congressman said in a message to fellow GOP lawmakers on Saturday.
PRESIDENTIAL ELECTION・5 DAYS AGO
Washington Examiner

EXCLUSIVE — Sen. Cynthia Lummis of Wyoming would neither confirm nor deny former President Donald Trump's claim that she is joining him in opposing Rep. Liz Cheney's reelection bid. In a statement announcing his endorsement of Harriet Hageman, a challenger to Cheney in the 2022 Republican primary for Wyoming's at-large...
POTUS・14 DAYS AGO
Washington Examiner

Several true but easy conclusions suggest themselves regarding two stories out this week about the Trump campaign’s attempts to overturn last year’s presidential election. Rather than just look backward, though, let’s focus forward toward a cure. The cure would be one that everybody on the political spectrum should agree on,...
PRESIDENTIAL ELECTION・22 HOURS AGO
WashingtonExaminer

DEL RIO, Texas — The Biden administration has set a deadline of Friday night to clear out the Haitian migrant camp that has caused major headaches for the White House, sources told the Washington Examiner.
DEL RIO, TX・13 HOURS AGO
Fox News

Republican Sen. Ted Cruz mocked Democratic Rep. Alexandria Ocasio-Cortez and her previous visit to a migrant facility, and issued a "simple challenge" to her and her colleagues to visit the "Biden cages" holding migrants amid the border crisis. "Mr. President, every Democrat who stood up and lamented kids in cages,...
DEL RIO, TX・19 HOURS AGO
USA TODAY

The latest in the political war between Trump and members of the Republican establishment as he seeks to maintain his control of the party.
POTUS・19 HOURS AGO
southarkansassun.com

US President Joe Biden announced that the largest permanent increase in food stamp benefits has been approved, a boost that the White House and proponents of the move hope will help low-income families afford healthier food choices when stocking their refrigerators and pantries. SNAP Benefits Will Increase More Than 25%...
AGRICULTURE・20 HOURS AGO