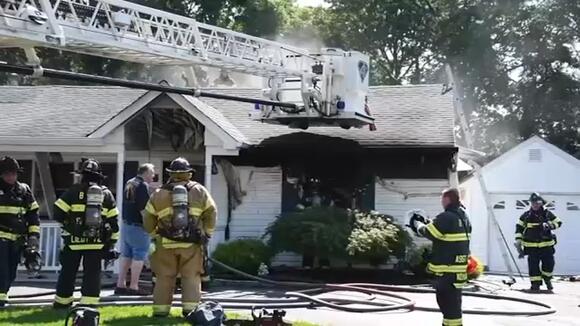 Authorities have identified the woman killed in a fast-moving house fire on Long Island Friday morning. The victim is identified as 61-year-old Suzanne Minervini, who lived in the home. The flames broke out around 10 a.m. Friday at a home on Udall Road in West Islip. Firefighters and police were quickly on the scene and extinguished the blaze, but Minervini, who was trapped inside, was pronounced dead at the scene. Neighbors say they saw the woman's husband was panic-stricken and trying to get inside. He was apparently out when the fire began. "He looked frantic," neighbor Kim Mastrandrea said. "And I came out, and the cops were here in two seconds. Otherwise I would've done something. But they were literally here in two seconds." A firefighter also suffered minor injuries. "Obviously it's not something we ever want to come across," West Islip Assistant Fire Chief Robert Celeste said. "But luckily, we do have each other, and at the same time, we have resources needed if need be." Suffolk County Police Homicide Squad and Arson Section detectives are investigating. Authorities say the fire does not appear suspicious, but the cause remains under investigation. MORE NEWS: Celebrity NYC sommelier charged with arson

According to authorities, celebrity sommelier Caleb Ganzer was caught on camera lighting outdoor dining structures on fire, then casually walking down the street afterward.

Police say the man tried to get into the eatery through a rooftop exhaust fan.
ATLANTIC COUNTY, NJ・8 HOURS AGO
ABCNY

There were at least seven incidents reported to police starting back in May with the most recent happening last Wednesday. Police released video of the most recent incident.
BRONX, NY・1 HOUR AGO
ABCNY

The parents of Brian Laundrie say they do not know where their son is and hope the FBI can locate him as the search for his whereabouts enters a second week.
RELATIONSHIPS・20 HOURS AGO
ABCNY

Police in Queens are searching for a man behind at least two forcible touching incidents involving women pushing strollers, and they're hoping surveillance will lead to an arrest.
QUEENS, NY・4 HOURS AGO

Police attempted to pull over the vehicle, which was traveling at excessive speeds and going through red lights.
BAYONNE, NJ・4 HOURS AGO
ABCNY

Police are investigating who killed a man riding an e-bike in a hit-and-run crash in Brooklyn.
BROOKLYN, NY・1 DAY AGO
ABCNY

Several people shot, 1 by an NYPD officer, in Inwood section of Manhattan

A suspected gunman shot by an NYPD officer is hospitalized, and four other people were wounded, after gunfire erupted outside a lounge in Inwood early Monday morning.
MANHATTAN, NY・1 DAY AGO

The Bronx Homicide Squad held the funeral for the newborns at the East End Funeral Home on Gunhill Road Saturday morning.
BRONX, NY・2 DAYS AGO
ABCNY

Investigators have ramped up their search for a missing New Jersey woman who was last seen three months ago in the Yucca Valley area of San Bernardino County.
PUBLIC SAFETY・3 DAYS AGO
ABCNY

The deaths of two newborns discovered outside a Bronx apartment building last year has been ruled a homicide, but what led up to their tragic deaths remains a mystery.
BRONX, NY・3 DAYS AGO

Responding officers found the victim with a deep cut to the back of his head.
NEWARK, NJ・3 DAYS AGO
ABCNY

'Gabby Petito Foundation' created to help families of missing children; funeral to be open to public

Gabby Petito's father, Joseph Petito announced the creation of 'The Gabby Petito Foundation.' In a tweet, he said the foundation will give resources and guidance to families of missing children.
SUFFOLK COUNTY, NY・2 DAYS AGO
ABCNY

The attacker followed the 76-year-old man into the vestibule of the building and then put him into a chokehold.
PUBLIC SAFETY・4 DAYS AGO
ABCNY

A bull that has been on the loose for more than two months after escaping from a slaughterhouse on Long Island has finally been captured, the Suffolk County SPCA said Thursday.
SUFFOLK COUNTY, NY・5 DAYS AGO
ABCNY

The Gabby Petito case has made national headlines, but there are also people who disappear in the Tri-State Area that don't garner the same attention.
NEW YORK CITY, NY・3 DAYS AGO
ABCNY

Police are trying to identify a suspect in the shooting of an NYU student in Brooklyn.
BROOKLYN, NY・4 DAYS AGO
ABCNY

Shea revealed Thursday that just 62% of police officers are vaccinated, one of the lowest among city agencies.
NEW YORK CITY, NY・4 DAYS AGO