How Biden's bipartisanship could hurt Democrats in 2022 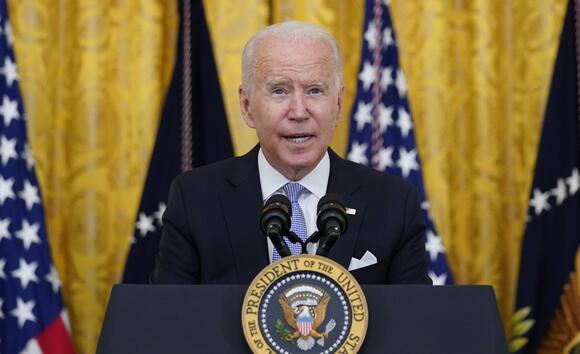 The White House is betting bipartisanship will help President Joe Biden and congressional Democrats hold on to power after next year's midterm elections and the coming 2024 cycle following their $1.2 trillion brick-and-mortar infrastructure deal with Senate Republicans.

But the problem for Democrats is while bipartisanship may boost candidates in general elections, it hamstrings them in primary contests, particularly if they are competing in gerrymandered districts.

Bipartisanship polls well with survey respondents, yet in the end, voters care more about how they benefit from the final package than how it became law, according to Monmouth University Polling Institute Director Patrick Murray.

"You may get a gold star for passing a bipartisan bill, but only the results get figured into your GPA when election time rolls around," he told the Washington Examiner .

The White House begs to differ. After all, Biden beat former President Donald Trump last year by campaigning on a promise to return calm, civility, and bipartisanship to Washington, D.C. And aides are accustomed to being doubted by pundits after that platform was dismissed as idealistic and naive.

Yet, pollsters are unsure whether the White House will notch repeat success with that strategy after the electorate has a two- to four-year break from Trump's chaos and rhetoric.

For Paleologos, those answers reflect Democratic control of the White House and the party's slim majorities in Congress.

"What the polling is telling us is that people want leaders who are bipartisan. They want policies that are bipartisan," he said. "But they want those things, especially if their party is in control."

Biden's bipartisanship is an entreaty to centrists, with crossover appeal for independents, according to Paleologos. He described Biden's laser focus on that middle lane as "the push factor," while "the pull factor" is that it will motivate far-left and far-right primary challengers to run against incumbents.

"You're going to have Trump and other conservatives meddling in Republican primaries, especially against those Republicans who took a more moderate position. And knowing that the turnout is going to be lower, trying to unseat those moderate Republicans," he said. "And on the Left, you're going to have progressives who are unhappy that the legislation didn't go far enough and perceive it to be a missed opportunity. And, therefore, they are going to target people who were willing to compromise so easily."

Paleologos predicted the rallying cry of the 2022 primaries will be "sell out." He based his prediction on the number of gerrymandered House districts and the fact that voters who appreciate bipartisanship, such as independents, tend not (or are not allowed) to cast ballots in the contests. That, in turn, will ramp up the polarization of the general elections and nullify the boon of Biden's across-the-aisle approach.

"Independents will make a big difference in a general election in 2022, so being on that bipartisan side of a key piece of legislation will play well — but you've got to get there," Paleologos said. "What if you're not the nominee come November because you've been knocked out by a candidate that plays better to a nonindependent or partisan base?"

Biden senior adviser Mike Donilon touted the bipartisan infrastructure accord this week in a memo titled "Swing Voters Want Bipartisanship and the Bipartisan Infrastructure Deal’s Investments in Our Economic Strength."

"Wednesday’s bipartisan agreement is an important signal to voters that they’re being heard and that their government can work as they think it should," he wrote.

In a statement released after striking the bipartisan deal, top negotiator Arizona Democratic Sen. Kyrsten Sinema announced she did not support the companion $3.5 trillion Democratic social and environmental programs reconciliation bill. Her decision rankled her far-left counterparts, jeopardizing it in the House.

“Neither side got everything they wanted,” Biden said this week of the bipartisan pact. “But that’s what it means to compromise and forge consensus.”

If Congress passes the vast reconciliation bill, voters will like what's in it. That's the Obamacare-like line some Democrats are taking as President Joe Biden steps up his campaign to pull the sprawling spending package across the finish line.
PRESIDENTIAL ELECTION・1 DAY AGO
WashingtonExaminer

Members of the media and law enforcement vastly outnumbered a few hundred rallygoers at a much-hyped event outside the Capitol on Saturday to support those who were arrested on suspicion of participating in nonviolent crimes that were connected to the Jan. 6 Capitol riot.
WASHINGTON, DC・4 HOURS AGO
WashingtonExaminer

Congress is back to serving up the pork

Pork is being served in Washington again. Big juicy slices were given to the lobbyists with the deepest wallets and the campaign contributors who wrote the most significant reelection checks. It is the way of the swamp. It is the currency of the Washington Beltway and explains how people get so rich in politics.
WASHINGTON, DC・1 DAY AGO

Former President Donald Trump attacked a retiring House Republican on Friday and touted his endorsement of a primary rival in the district as the cause.
POTUS・1 DAY AGO
WashingtonExaminer

The House will vote next week on a major funding bill that combines federal government spending with emergency money for Afghan refugees and states hit hard by summer flooding and hurricanes.
CONGRESS & COURTS・1 DAY AGO
WashingtonExaminer

Republicans and former President Donald Trump will be nowhere near a rally planned for Saturday at the Capitol building by those who sympathize with the hundreds of Jan. 6 rioters charged and, in some cases, held in extended custody for trespassing and other offenses.
PROTESTS・13 HOURS AGO
WashingtonExaminer

The problem with moderates

This week’s letter will read rather like one of Nicholas Clairmont’s “Word of the Week” columns. Nick’s meditations are excellent, so perhaps I flatter myself. But either way, the word I want to pick apart is “moderate,” one of the most misused terms in our politics.
U.S. POLITICS・1 DAY AGO
WashingtonExaminer

The cybersecurity lawyer indicted this week by a grand jury in special counsel John Durham's investigation could end up being the "fall guy" for Hillary Clinton's 2016 campaign, warned a top House Republican.
U.S. POLITICS・23 HOURS AGO

'The strike was a tragic mistake': Quotes of the week

The past week was dominated by comments that may or may not have been said by Gen. Mark Milley, chairman of the Joint Chiefs of Staff. It ended with the U.S. military admitting that an airstrike they initially said took out ISIS-K terrorists in response to the Kabul suicide bombing actually killed 10 innocent people, including an aid worker and up to seven children.
MILITARY・13 HOURS AGO
WashingtonExaminer

Georgia Secretary of State Brad Raffensperger says he will not comply with expected subpoenas from the Jan. 6 commission, deeming the congressional group that is investigating the Capitol riot a "partisan sideshow."
U.S. POLITICS・1 DAY AGO
WashingtonExaminer

Efforts to push a proposal for direct drug pricing negotiations between the government and pharmaceutical companies over the finish line will face a steep uphill battle, liberal health reform groups warn.
CONGRESS & COURTS・1 DAY AGO
WashingtonExaminer

This week’s White House Report Card finds President Joe Biden facing the horrific results of his immigration policy errors with some 14,000 migrants massing on the U.S.-Texas border in horrible conditions. Add to that his failure to win over Democratic West Virginia Sen. Joe Manchin to back his $3.5 trillion...
PRESIDENTIAL ELECTION・10 HOURS AGO

If the New York Times is to be believed, the Federal Election Commission has cleared Twitter of violating any election laws by censoring a New York Post story about Hunter Biden’s notorious laptop less than three weeks before the 2020 election.
PRESIDENTIAL ELECTION・1 DAY AGO
WashingtonExaminer

The Jan. 6 committee has vowed to look into the Department of Defense’s actions following the Capitol riot in light of revelations about the steps Gen. Mark Milley took to assure the Chinese that former President Donald Trump would not authorize an attack against them.
FOREIGN POLICY・1 DAY AGO
WashingtonExaminer

A week before Democratic Gov. Gavin Newsom beat back a recall election, Vice President Kamala Harris returned to California to rally voters to his side. United in victory for now, Democrats suspect Harris and Newsom will soon find themselves on a collision course.
POLITICS・10 HOURS AGO
WashingtonExaminer

The Florida Legislature is set to begin its decennial redistricting process next week when the Senate’s Reapportionment Committee meets Monday and the House Legislative Redistricting Committee holds hearings Wednesday and Thursday.
FLORIDA STATE・1 DAY AGO