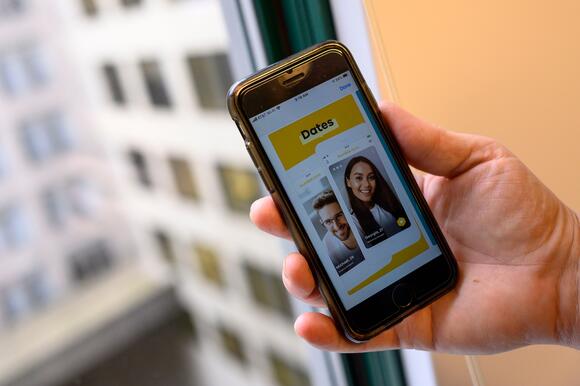 A man who thought he had found love was actually being deceived by his housemate.

Mario, an American man who works as a PE teacher and moved to live in London, thought he had fallen in love with Hannah, who he had been speaking to for eight months after meeting online.

The pair had matched on a dating app and sent each other messages every day - but ‘Hannah’ refused to speak on the phone whenever Mario suggested it, causing him to become suspicious.

So, Mario called MTV’s Catfish UK team in an effort to get to the bottom of it once and for all and hosts Oobah Butler and Julie Adenuga soon found out all was not as it seemed.

By reverse searching ‘Hannah’ the pair found that the image she had been using to portray herself actually belonged to a woman living in New Zealand who had no idea she was being used by a catfish.

“I feel foolish, do they not have better things to do with their time than waste mine?” Mario said.

Mario, along with the two hosts, even attempted to call Hannah but the efforts were unsuccessful.

Not only did the girl hang up, but she also sent a text to Mario asking: “Catfish have just been in touch, if I meet you, do you promise I won’t lose you?”

After finally arranging a meeting between the two virtual love birds in a park, it was finally revealed that ‘Hannah’ was in fact Courtney, Mario’s housemate, business partner and former friend-with-benefits.

Trying to plead her case, Courtney revealed that Mario had been her best friend. She said: “We’ve known each other for almost five years now.

“I wanted to see what it would be like to be his girlfriend, because I am desperately in love with him.”

Mario stayed at a friend’s house following the revelation, and when Courtney told him she wanted a relationship, he admitted he would never be able to trust her and her hopes were dashed.

Catfish then featured a surprising update where Mario and Courtney were seen two months later living back together and still friends.

Do not ever send money to anybody that you have not met (in person) yet, no matter how real or convincing they sound!! Scammers are very good at what they do. You can never outwit them! Just don't give money, even if it is just a little.

My daughter was the victim of a "Catfish" saga (without the TV program) for years. People she had an online friendship with was in reality just one incredibly shy girl with social disorders. Once she came clean with my daughter, they slowly were able to build a friendship based on honesty. They've been friends over 10 years now.

A woman in her early thirties turned to Reddit, voicing her concerns about how her brother wants her to make an exception for his rainbow baby at her adult-only wedding event. Some of the most memorable moments of our life can turn awry because of family conflicts, and this 33-year-old female experienced the same feeling. To vent out, she posted her story in Reddit's popular AITA forum, hoping to get some clarity.
RELATIONSHIP ADVICE・3 DAYS AGO
Amomama

E-40 has amassed incredible fame and fortune in the music industry despite his tough childhood and addiction problems. In addition to his successful career, he is also a committed husband and a supportive father. Earl Tywone Stevens Sr., popularly known as E-40, has been in the rap game for several...
RELATIONSHIPS・3 DAYS AGO
Indy100

One ungrateful boyfriend got a taste of his own medicine after an attempt to mock his girlfriend’s cooking backfired. His girlfriend, Jakia Rose (@chikitarosee), found the clip on his phone and decided to share the cooking diss to her TikTok account. The footage, which has since gone viral with 1.7...
BEHIND VIRAL VIDEOS・14 DAYS AGO
Amomama

After nearly two years of marriage and two children together, Britney Spears filed for divorce from Kevin Federline due to “irreconcilable differences.” Fifteen years later, Britney announces her engagement to Sam Asghari. Britney and her former backup dancer and rapper, Kevin Federline, had a tumultuous public breakup, followed by Britney’s...
RELATIONSHIPS・13 DAYS AGO

Burning love! Man proposes to his girlfriend on the night their new home went up in smoke - after recovering the engagement ring in the wreckage

A North Carolina man made the best of a bad situation by proposing to his girlfriend the night their house burned down — after recovering the engagement ring that survived the blaze. Sean Matthews intended on asking his partner Kellie Stanley to marry him in their new home in Fuquay-Varina,...
RELATIONSHIP ADVICE・6 DAYS AGO
TVShowsAce

Joy Forsyth Leads Her Children Down A Forbidden Path

Former Counting On star Joy Forsyth is showing fans that she’s taking her children, Gideon, 3, and Evelyn, 1, down a forbidden path. She doesn’t seem to mind doing things differently than she’s used to. Now, fans are praising her for making this decision for herself and her kids. So,...
FAMILY RELATIONSHIPS・4 DAYS AGO
Tyla

This Man's Apology To His Girlfriend Has People Absolutely Fuming

Arguments are always a part of a relationship and sometimes all you need is a sincere apology to help smooth things over (as well as maybe a gift or two!). That's what it seemed like when this man shared his sorry note and presents to his girlfriend on Twitter. However, upon closer inspection of the apology letter, people are calling it out for where it falls short.
RELATIONSHIP ADVICE・3 DAYS AGO
101wkqx.com

Vibe Check on this: a guy brought his XBox into the hospital room and almost missed the birth of his child. Baby mama is NOT happy…. @anxietycoupleHe’s going to miss his sons birth due to that Xbox 😂 #foryou #fyp #couplegoals #pregnant #pregnancy #laboranddelivery #labor #fortnite #xbox♬ original sound – Anxiety couple.
VIDEO GAMES・12 DAYS AGO

Gabby Petito’s father said he didn’t see any “red flags” from Petito’s boyfriend, Brian Laundrie, before the couple went off on a road trip. Petito, a 22-year-old from Long Island, has gone missing in recent days. She was first reported missing on Sept. 11. She did not return home from a road trip with her boyfriend, Brian Laundrie. The two spent weeks in Utah, visiting Mystic Hot Springs and Bryce Canyon, Canyonlands and Arches national parks, among other locations.
RELATIONSHIPS・12 DAYS AGO
The US Sun

ANTHONY Johnson, best known for his roles in House Party and Friday, was pronounced dead on September 20, 2021. Johnson was rushed to a Los Angeles hospital earlier in the month after he was “found lifeless” in a store, TMZ reported. Who was Friday star Anthony Johnson and what was...
CELEBRITIES・7 DAYS AGO
Daily Mail

She's a supportive wife to her country crooner husband. And Gwen Stefani sparkled in a set of behind-the-scenes snaps while on Blake Shelton's Friends and Heroes Tour. The singer, 51, wore a denim jacket over a sheer sparkly and nude bodysuit as she boasted about being 'Happy Anywhere' with her musician beau on the Indiana leg of the tour.
CELEBRITIES・16 DAYS AGO
Hello Magazine

Sir Elton John broke the sad news on Thursday that he has been forced to reschedule his Goodbye Yellow Brick Road tour due to ongoing health issues. The singer shared a heartfelt statement on social media in which he revealed he has been in "considerable pain and discomfort" after a nasty fall left him with a damaged hip.
CELEBRITIES・11 DAYS AGO

Gabby Petito’s identity saw confirmation after the discovery of the woman’s body in Teton-Bridger National Forest earlier this week. Further, investigations into the missing Brian Laundrie case have intensified. Authorities spent several days extensively searching Florida’s massive Carlton Reserve, where Laundrie’s last reported location was. However, law enforcement has continued to discover nothing of note. As a result, investigators tracking Laundrie have now put a bounty on his head, officially authorizing an arrest warrant.
PUBLIC SAFETY・3 DAYS AGO
The US Sun

A "BEAUTIFUL" personal trainer mum killed herself after "not being able to cope" - and her heartbroken husband has paid an emotional tribute to her. Michelle Sparman, 48, leaves behind two sons - Max, 11 and Sam, 8 - as well as her devastated fiancé Roger Stephens, 51. Michelle, who...
CELEBRITIES・23 DAYS AGO
Page Six

Britney Spears’ love for her kids is not only “stronger than yesterday” but than ever before. The pop superstar, 39, updated fans on her “very private” sons, Sean Preston, 16, and Jayden James, 15 — whom she shares with ex-husband Kevin Federline — in a belated birthday tribute shared Tuesday.
CELEBRITIES・5 DAYS AGO
The US Sun

A WOMAN was left horrified after accidentally hair spraying hundreds of spiders and bugs to her bedroom wall. TikTok user @leonarodicaprio panicked after a plague of tiny creepy crawlies appeared in her room - and rushed to grab the first item that she had to hand. In an attempt to...
BEHIND VIRAL VIDEOS・17 DAYS AGO
The US Sun

Teen, 16, passed out in horror after her finger tip was ripped off when it got stuck in Reading Festival barrier

A TEEN reveller passed out in horror after her finger tip was ripped off when it got stuck in a barrier during a mosh pit at Reading Festival. Summer Gibbs, 16, revealed she screamed and fainted after seeing the top of her finger be wrenched off as people danced around her over the weekend.
PUBLIC SAFETY・26 DAYS AGO
KGUN 9 Tucson News

Actor Don Collier, famous for his roles in western film and television including Bonanza and Gunsmoke, has died at the age of 92, his family says.
TUCSON, AZ・14 DAYS AGO
Amomama

Husband Leaves His Poor Wife with Four Kids after She Becomes Terminally Ill, Help Comes from an Unexpected Place — Story of the Day

Life is full of unexpected twists and turns. I realized it when my husband left me after I became terminally ill. However, I was fortunate that God sent me help from an unexpected place. “It could be a terminal illness. We don’t know yet,” the doctor told my husband, Josh....
FAMILY RELATIONSHIPS・2 DAYS AGO