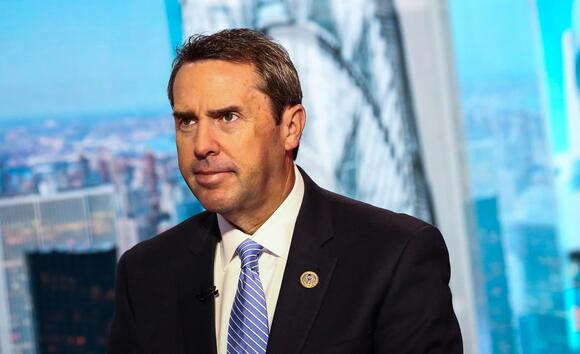 Former Rep. Mark Walker lashed out at the Club for Growth and suggested that former President Donald Trump was misled into endorsing his rival for the Republican Senate nomination in North Carolina during an interview with the Washington Examiner .

Referring to the Club for Growth and pointing to the outcome of a special House election in Texas that saw the free market advocacy group’s anointed candidate collapse, the former congressman said that “the super PAC” was similarly misjudging the North Carolina Senate primary with its endorsement of Rep. Ted Budd. Budd, also endorsed by Trump, “is a bad candidate” who Walker said will jeopardize GOP control of a seat being relinquished by retiring Sen. Richard Burr.

Contra his criticism of Washington-based groups, including the Club for Growth, Walker welcomed Trump’s meddling, saying, “He’s still the most impactful Republican in the GOP.” Walker even traveled to Mar-a-Lago, Trump’s winter residence in Palm Beach, Florida, in early May to ask the former president for support. Walker was left with the impression that Trump would not be endorsing — at least not anytime soon.

He blames Mark Meadows, a former North Carolina Republican congressman turned Trump White House chief of staff. Walker suggested that Meadows, who works for a political organization affiliated with Trump in his post-presidency, was the “puppet master” behind the former commander in chief's surprising, snap decision to endorse Budd just one month later. Walker said Meadows was out for revenge.

“When I endorsed Madison Cawthorn over Mark Meadows’s wife’s best friend, I think that created a situation where this was an opportunity for a little payback,” Walker said. “I did what was right. The repercussions probably cost me President Trump’s endorsement.”

Meadows was representing North Carolina’s 11th Congressional District when he resigned to become White House chief of staff. He endorsed ally Lynda Bennett in the Republican primary held to replace him, as did Trump. Walker backed Cawthorn, 25, who pulled off the upset in a subsequent primary runoff contest, becoming a darling of grassroots conservatives even before he assumed office.

A spokesman for Meadows declined to comment for this story, as did a spokesman for the Budd campaign. Polls showed an uptick of support for Budd after Trump endorsed him, with Republican operatives in North Carolina agreeing the primary is now his to lose.

On Tuesday, Jake Ellzey defeated Susan Wright in a special election to fill Texas’s vacant 6th Congressional District. Ellzey, a state representative backed by former Gov. Rick Perry and Texas Rep. Dan Crenshaw, was considered the underdog against Wright, who was running to replace her deceased husband and enjoyed endorsements from Trump and the Club for Growth. On Wednesday, Walker took to Twitter to criticize “a DC super PAC.”

“Once again, a DC Super PAC spent millions on a candidate whose voter card they wanted to control only to be rejected by the voters,” the former congressman tweeted. “Just like NC voters, TX voters knew better than the DC special interest, and that’s why the grassroots candidate won in #TX06.” On Thursday, Walker did not deny that he was referring to the Club for Growth.

“I’m not going to name names at this point. I’ll let the reader … draw their own conclusion,” Walker said Thursday. “But I don’t know that it’s too hard to tell when … the super PAC is out there boasting they’ve dropped $5.1 million — $5.125 million, I believe it was, for this particular candidate.” Indeed, on June 21, the Club for Growth announced its super PAC had raised $5.125 million for Budd’s Senate campaign.

The group is dismissing Walker’s critique as sour grapes.

“Classic Mark Walker, unelectable and trying to make everything about himself. If we had a nickel for every time he begged us for money or an endorsement, we would probably have more cash than he has in the bank for his campaign,” said Joe Kildea, spokesman for Club for Growth Action.

But Walker claims that it is Budd who is unelectable and insists he can win the nod despite missing out on Trump’s endorsement — just like Cawthorn did last year and just like Ellzey did this week.

Walker, 52, was a House member for six years, retiring after the 2020 elections to focus on his planned Senate bid.

A pastor, he has traveled the state delivering guest sermons in a different church every Sunday since he launched his campaign and before that typically did so about twice a month. Walker is confident that the bond he has forged with evangelicals and the healthy list of endorsements from local elected officials across North Carolina will combine to deliver him the nomination in next March’s primary. Former Gov. Pat McCrory is also running.

Walker entered July with just under $927,000 in cash on hand, more than McCrory’s $955,000-plus but far less than Budd’s $1.7 million. But Walker said he has overcome financial disadvantages in the past and can do so in this contest. To get there, he is not pulling any punches in comparisons with Budd, his main competition. Walker charges that his opponent is thick on pleasing rhetoric and thin on meaningful, conservative accomplishments.

“I don’t think he’s electable, but also don’t think he’s effective,” Walker said. “We’ve been sending fighters to D.C. for 50 years. Why can’t we send somebody on the Senate side who can fight and knows how to win?”

So Trump made a mistake? Like his whole time in public office hasn't been a MISTAKE? LOL!!!!!

"It is a loser for the USA, a terrible deal, and makes the Republicans look weak, foolish, and dumb," Trump wrote.
POTUS・11 HOURS AGO
TheAtlantaVoice

Herschel Walker flashed his megawatt smile and shook hands with adoring Georgia Bulldog football fans before the team’s recent home game, and then did what he is most famous for: he ran like hell. The legendary running back who won the 1982 Heisman Trophy is avoiding public events and questions from the press assiduously, even as he settles in as […]
ATLANTA, GA・1 DAY AGO
The Guardian

Former President George W. Bush is getting the band back together next month for a fundraiser for embattled Wyoming Rep. Liz Cheney in an effort to take the Republican Party back from former President Donald Trump.
PRESIDENTIAL ELECTION・1 DAY AGO
Fox News

Former President Trump returned to Georgia this weekend, to amplify his attacks on the key battleground state’s top elected Republican leaders and to showcase a trio of candidates loyal to the former president. For Trump, the trip to Georgia was personal – it came as he’s still trying to overturn...
GEORGIA STATE・1 DAY AGO
Hawaii Tribune-Herald

PERRY, Ga. — The rewards of an early Donald Trump endorsement were on display Saturday in Georgia when a three-man ticket of candidates he’s backing in 2022 Republican primaries were featured at one of his signature rallies. But GOP opponents of Trump-backed candidates aren’t folding in Georgia and some say the former president’s nod could hurt Republicans in a general election in the closely divided state.
GEORGIA STATE・1 DAY AGO
NBC News

Biden in a bind on the border: 'The politics finally got the better of their policy'

WASHINGTON — Democratic Rep. Ayanna Pressley, of Massachusetts, called the Border Patrol “egregious and white supremacist.” Rep. Maxine Waters, D-Calif., said it was “worse than what we witnessed in slavery.”. The pair spent years targeting similar criticism at former President Donald Trump for his handling of the border. But this...
PRESIDENTIAL ELECTION・1 DAY AGO

A Fox News poll released last week found that 67 percent of voters support requiring teachers and students to wear masks in schools. Even in the “reddish” state of Florida, a Quinnipiac University poll last month found that 60 percent of people there favor school mask mandates. This makes great sense given that Covid-19 hospital admissions for children recently reached their highest levels since the start of the pandemic, and the American Academy of Pediatrics reported more than 240,000 pediatric Covid cases between Sept. 2 and Sept. 9.
FLORIDA STATE・1 DAY AGO
WCNC

US Senate hopeful Mark Walker warns against politicization of pandemic

CHARLOTTE, N.C. — Mark Walker, a candidate for U.S. Senate from North Carolina, is looking to distinguish himself from democrats, fellow republicans, and anyone associated with Washington, D.C. "You can go to D.C., not compromise, hold your values, and still speak to all communities," Walker said. Walker points to his...
CHARLOTTE, NC・2 DAYS AGO
TheAtlantaVoice

Houston, we’ve got a problem. A diplomatic spat with one of our oldest and closest allies. A legislative agenda stalled in a debate over the size of infrastructure packages on Capitol Hill and bumping up against major deadlines. A genuine crisis at the southern border. A confusing federal reaction to a global pandemic. Call it a crisis of credibility or […]
PRESIDENTIAL ELECTION・2 DAYS AGO
11Alive

PERRY, Ga. — University of Georgia Bulldog, Heisman Trophy winner, NFL star and now U.S. Senate candidate Herschel Walker made an appearance alongside former President Donald Trump on Saturday night to campaign at the 'Save America' rally in central Georgia. "People always ask me what qualifies me to run for...
GEORGIA STATE・2 DAYS AGO

A new TV ad by a pro-GOP group that backs party candidates running in state legislative elections is going where Republicans have been hesitant to go until recent weeks. The spot ties an incumbent Democratic state delegate in Virginia who’s running for reelection this November to President Biden, whose approval ratings have taken a major hit over the past month and a half.
PRESIDENTIAL ELECTION・2 DAYS AGO
The Independent

Democrats pushed a $3.5 trillion, 10-year bill strengthening social safety net and climate programs toward House Budget Committee approval Saturday, while party leaders hunted behind the scenes for compromises to resolve internal divisions and, they hoped, allow the sprawling package's eventual passage by Congress Approval by the Democratic-dominated panel, meeting virtually, was assured. Passage would mark a necessary but minor checking of a procedural box for Democrats by edging it a step closer to debate by the full House. Under budget rules, the committee wasn't even allowed to significantly amend the 2,465-page measure, the product of 13 other House...
PRESIDENTIAL ELECTION・2 DAYS AGO
Washington Examiner

The draft report of the Arizona election audit of Maricopa County showed, once again, that former President Donald Trump lost the state. In a logical world, Republicans would quit listening to the confirmed loser as he continues to complain about his loss. A draft report of the findings shared with...
PRESIDENTIAL ELECTION・3 DAYS AGO
sandiegouniontribune.com

No stalking order for rival in GOP candidate murder plot

A handful of Republican candidates for Congress plan to participate in a rally Saturday at the State House in support of rioters charged in the Jan. 6 storming of the Capitol. And the group promoting the rally — Look Ahead America — says it will try and push a resolution through the state Legislature next year that aims to put pressure on Congress to help free some of the rioters involved.
COLUMBIA, SC・4 DAYS AGO
Washington Post

Former Missouri governor Eric Greitens (R), who is running for Senate, said Tuesday that if he wins next year, he will not support Senate Minority Leader Mitch McConnell (R-Ky.) as former president Donald Trump tries to oust the GOP party leader. Since announcing in March that he will run for...
PRESIDENTIAL ELECTION・6 DAYS AGO
The Guardian

One of the seven Republican senators who voted to convict Donald Trump at his second impeachment trial warned on Sunday that the former president’s “bullying” of the party would lead to electoral defeat in next year’s midterms and beyond. Bill Cassidy of Louisiana was speaking days after the Ohio Republican...
NFL・8 DAYS AGO