A brown bear attacked a group of campers, eating one and forcing the others to flee barefoot into the mountains 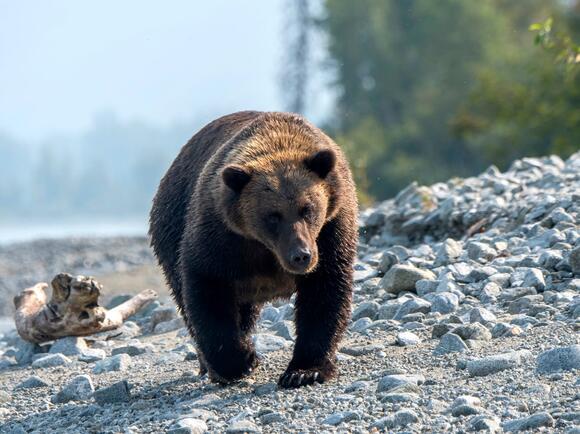 As a group of hikers on a camping trip unpacked their belongings, one was attacked and killed by a brown bear in Russia.

The group was hiking in the popular Ergaki national park in southern central Russia when the tragedy occurred on July 27.

Krasnoyarsk regional news service reports that the men scaled a wall of rocks once they saw the "drooling" bear - but one man, Yevenggny Starkov, 42, lagged behind.

One of the survivors told the local news that they watched their friend get devoured before fleeing further into the forest after the bear caught sight of them.

The group walked for seven hours - barefoot through the wilderness without any equipment - before they reached safety and were able to inform authorities of the incident.

Ergaki National park has made a number of statements on their VK page - a Russian social media platform.

The administration confirmed the incident and announced that the park - aside from some specific trails - would be closed to visitors until November 1, 2021.

The Ministry of Ecology and the park administration apprehended the animal and killed it. Investigations are ongoing as to the circumstances of the event.

This is the second fatal bear incident in the national park this summer. A brown bear was shot in June after it killed a 16-year-old boy who was working as a sherpa.

A number of theories have been posited about why there has been a spike in bear attacks - one being that the bears are hungrier, as a result of a longer, snowier, and colder winter restricting their access to food.

Man goes to bears home. Bear does what bears do and then the bear has to die? I feel like if you camp in bear territory and get eaten by a bear that’s just a risk you take. What did he think the bear was gonna do steal their picnic baskets and tell his friend booboo he was smarter than the average bear

A Southern California mom hearing a disturbance outside Thursday morning found a 65-pound mountain lion dragging her 5-year-old son across her front yard, wildlife officers say. “She ran out of the house and started punching and striking the mountain lion with her bare hands and got him off her son,”...
ANIMALS・21 DAYS AGO
KAJA KJ 97

The girl and her family were visiting the beach at South Padre Island.
TEXAS STATE・2 DAYS AGO
femalefirst.co.uk

The Sun Times would like to thank our friends at The Blackfoot Valley Dispatch in Lincoln for allowing us to share this story with our readers. Check out their website at www.blackfootvalleydispatch.com. In the wake of a tragic grizzly attack that claimed the life of visiting cyclist Leah Lokan on...
OVANDO, MT・10 DAYS AGO
Jackson Hole News&Guide Newspaper

Bear killed after incidents with campers

PINEDALE — A Wyoming Game and Fish Department large-carnivore conflict team killed a male black bear Aug. 29 for pushing the limits while trying to get human food. Hikers and campers coming out of the Big Sandy and Clear Lake areas in the Bridger-Teton National Forest on Aug. 24 and Aug. 25 started reporting incidents with the bear tearing down their properly hung food and testing food, gear and packs nearly every night since at least Aug. 23, according to supervisor Dan Thompson.
PINEDALE, WY・13 DAYS AGO
Insider

Videos show terrifying moment a Florida woman fended off a large, angry alligator while on a paddle board

Several commenters on Facebook said Vicki Reamy Baker should not have provoked the predator by prodding it.
FLORIDA STATE・7 DAYS AGO
The Independent

A man has been accused of killing an alligator and destroying its nest with a lawn mower. A 59-year-old Floridian man has been arrested, facing third-degree felony charges. The alligator and nest were disturbed after the man began clearing grass from the area. The footage shows the man warning the...
ANIMALS・23 DAYS AGO

SAN ANTONIO — A 50-year-old man drowned at San Antonio’s River Walk after he was pushed into the water during an argument with two men Friday night, authorities said. Pedro Medina, 32, was arrested on a charge of manslaughter, the San Antonio Express-News reported. The second person has not been identified yet, the newspaper reported.
ACCIDENTS・7 DAYS AGO
gentside.co.uk

Drunken man throws himself at a massive shark from his boat

Don't drink and swim. As proof, a chilling video has surfaced on social networks. A man, probably drunk, jumped from his boat onto a shark that was circling the boat. A video dating from 2 July surfaced during the week showing the adventures of a man on his boat. In the video, an unidentified man is filming a shark swimming next to their boat. In between a choir of 'Ooohs' and 'Aaahs,' to everyone's disbelief, we see a man jumping in the water, right above the shark. After looking at the camera—as if posing for a photo—he quickly gets back onto the boat as his mates cheer him on, saying: 'That was sick, man!'
ACCIDENTS・7 DAYS AGO
Insider

Rescuers discovered 2 shipwrecked children clinging to their dead mother, who had saved their lives by drinking her urine to breastfeed them

Mariely Chacón's kids, aged 2 and 6, were found after their boat capsized, casting them adrift at the sea for days. She died hours before rescuers arrived.
ACCIDENTS・1 DAY AGO
967 The Eagle

A Labrador from New Hampshire by the name of Miley was caught on video tripping hard after eating a bad mushroom (or a really good one). “My dog just ate a wild mushroom and we just spent $140 for the vet to tell us she’s high,” Miley’s owner, Shannon, wrote with a video of the incident.
ANIMALS・9 DAYS AGO

FLAT ROCK, Alabama (WDEF) – A Sheriff’s K-9 sniffed out a suspect on Sand Mountain on Monday. DeKalb County deputies went to a home in Flat Rock on some outstanding warrants. While they were talking to Audrey Denis Welden, Carlton Welden ran out of the back of the house an...
FLAT ROCK, AL・4 DAYS AGO
International Business Times

A 16-year-old surfer’s encounter with a shark and its subsequent attack last week near Daytona, Florida, was caught on camera. The video showed Doyle Nielson paddling on his board at New Smyrna Beach when a shark rushed towards him and bit him on his right arm. During the incident, two sharks were seen darting through the same wave with surfers just feet away at Ponce Inlet near the beach.
FLORIDA STATE・3 DAYS AGO
UPI News

Aug. 23 (UPI) -- A pair of Minnesota teenagers doing gardening at a friend's house had a close encounter with a wandering black bear, and the incident was caught on camera. Hailey Nelson, 17, and Dori Arndt, 15, were working in the front garden at the Centerville home of friend Hailey Nyberg, 17, when Nelson spotted what she initially thought to be Nyberg's dog in the corner of her vision.
ANIMALS・26 DAYS AGO
wmar2news

An 11-year-old girl was injured Thursday afternoon after apparently being bitten by a shark, according to South Padre Island officials. The girl suffered injuries to her thigh in the attack, which occurred around 3 p.m. on the Texas island, a city spokesperson said. She was visiting from Colorado with family...
TEXAS STATE・2 DAYS AGO
KICK AM 1530

Midwest Farmer Surprised to See a Bear Eating All His Corn

It's a proven fact that bears will eat just about anything and everything. A Midwest farmer learned this as he was surprised to see much of his corn had been eaten by a large bear who was still feasting. Here's what this farmer had to say about Yogi Bear having...
ANIMALS・12 DAYS AGO
Billings Gazette

The body of a missing Richmond, Virginia, woman was found Sunday in Glacier National Park, officials said. Jennifer Coleman, 34, who was reported missing Wednesday, was found deceased in a steep and rocky area near the Continental Divide, park officials said in a news release. Her family has been notified.
FLATHEAD COUNTY, MT・13 DAYS AGO
TheDailyBeast

The boyfriend of a 22-year-old woman who vanished in Wyoming last month while the couple was on a road trip together released a statement Tuesday, breaking his silence as he reportedly refuses to speak to her family or the police. Brian Laundrie, 23, and Gabrielle Petito had been on a...
RELATIONSHIPS・4 DAYS AGO