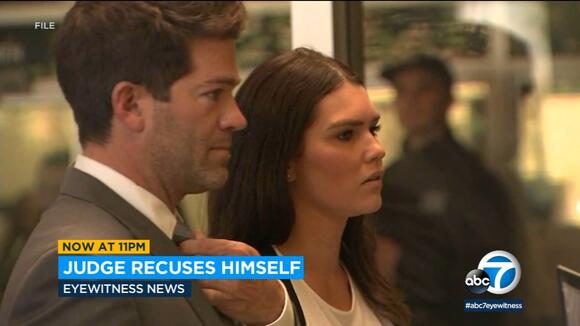 An Orange County Superior Court judge Friday recused himself from the case involving Grant Robicheaux and Cerissa Riley, the Newport Beach couple accused of drugging and sexually assaulting several women. Judge Steven Bromberg has recused himself from the case amid allegations he mistreated both defense attorneys and state prosecutors during a recent hearing. Defense attorneys say he personally attacked the competency and integrity of various lawyers. State prosecutors are trying to scale back criminal charges against Robicheaux and Riley. RELATED: AG seeks to drop most charges in Newport Beach rape case

State prosecutors asked to drop most of the charges against Grant Robicheaux and Cerissa Riley, the O.C. couple accused of drugging and sexually assaulting several women.

The defense attorneys filed the motion to disqualify the judge, saying any bias precludes their clients from achieving the appearance of a fair hearing or trial. Robicheaux - who previously appeared on a Bravo TV show called "Online Dating Rituals of the American Male" - and Riley were initially charged in 2018 with rape by use of drugs, kidnapping and other crimes. At the time, authorities alleged that the pair plied their victims with drugs and sexually assaulted them when they were incapable of resisting.

A murder suspect has been arrested in Iowa for the killings of a man and a woman who were shot Sept. 4 in Long Beach.
IOWA STATE・1 DAY AGO
ABC7

Riverside County has paid $11 million to a man who spent two decades in prison after being wrongly convicted of killing his girlfriend in 1998.
RIVERSIDE COUNTY, CA・4 DAYS AGO
ABC7

A judge has denied a convicted rapist's bid to be set free after 30 years, after DA George Gascon's office changed positions and opposed his release.
LOS ANGELES COUNTY, CA・4 DAYS AGO
ABC7

A Costa Mesa man living under a stolen identity and a female inmate have been charged with using a drone to smuggle drugs into a jail in Orange.
COSTA MESA, CA・3 DAYS AGO

Details are emerging in the case of a woman and her boyfriend who were arrested for allegedly torturing and murdering the woman's 7-year-old daughter in Hawthorne.
HAWTHORNE, CA・4 DAYS AGO
ABC7

Man arrested for allegedly killing his mother, whose body was found in Mission Viejo home

A 36-year-old man was arrested for allegedly killing his own mother, whose body was discovered inside her Mission Viejo home.
MISSION VIEJO, CA・3 DAYS AGO
ABC7

Riverside County Sheriff Chad Bianco says he will not enforce any type of COVID-19 vaccination mandate on employees of the sheriff's department.
RIVERSIDE COUNTY, CA・4 DAYS AGO