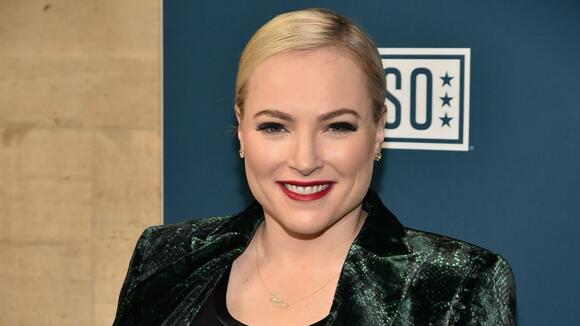 Meghan McCain said Friday that Democrats should give former President Trump “a little credit” for the COVID-19 vaccine.

During Friday’s episode of “The View,” McCain said giving Trump credit for the vaccine would help show that getting vaccinated is a bipartisan issue.

“If the White House truly wanted to show that this a bipartisan issue — that this is about getting everyone vaccinated, not just Democrats — they should give a little credit to President Trump,” McCain said.

McCain said that “Fast and Furious,” referring to Operation Warp Speed, really did work in accelerating the availability of coronavirus vaccines.

She further took aim at White House press secretary Jen Psaki , who previously said that other former presidents “did not need an engraved invitation” to promote vaccinations.

“At this point, if it’s this serious that we’re going to lock down the country and masking everyone including, by the way, 2-year-olds, you should invite President Trump someone in Trumpland to help get the messaging out because until then we’re all being held hostage until this maybe never passes,” McCain said.

McCain made the comments as "The View" co-hosts were discussing House Republicans protesting the Capitol physician’s decision to reinstate a mask mandate.

The decision came after the Centers for Disease Control and Prevention updated mask guidance to indicate that fully vaccinated residents in areas of “substantial” or “high” transmissions of COVID-19 should wear masks in certain settings amid the rise of the Delta variant of the coronavirus.

McCain said she has "very little hope we’re going to be pulling out of this."

Give Trump the amount of credit for the vaccine he deserves, after you've subtracted his hiding how deadly the virus was, to protect the Economy and his Reelection.

I glad Meghan is leaving, so go already. Trump need no credit for hiding and lying about the virus while hundreds of thousands died. Biden has showing bipartisan since day one, it the republicans who are refusing to work with him.

President Joe Biden doesn’t have the legislative authority to force millions of private-sector workers to either accept a vaccine, submit to weekly testing, or lose their jobs. In attempting to do so, Biden is doubling down on the previous administration’s petty executive branch tyranny. America shouldn’t stand for it. Biden...
PRESIDENTIAL ELECTION・10 DAYS AGO
Washington Post

Good morning and welcome to the first day of fall. Let the pumpkin spice whatever commence without shame. Send tips (of course, we'll protect your anonymity): earlytips@washpost.com. Thanks for waking up with us. 🚨: “Former president Donald Trump has filed a lawsuit against the New York Times, three of its...
PRESIDENTIAL ELECTION・3 DAYS AGO
Best Life

This Is Who Will Replace Meghan McCain When "The View" Returns

Things will look different when The View returns for its 25th season in September. Not only will all of the hosts be filming in the studio together for the first time since March 2020, but there will also be a new co-host. Former co-host Meghan McCain left the series in August, at the end of the show's 24th season, after four years on The View and tons of onscreen spats. When you tune in for the Season 25 premiere, a new View host will be taking her seat. Read on to find out who will be taking McCain's place on The View.
NEW YORK CITY, NY・25 DAYS AGO
MSNBC

Rep. Swalwell: ‘irresponsible’ to give Donald Trump any benefit of the doubt

Rep. Eric Swalwell (D-CA) joins Lawrence O’Donnell to discuss why Democrats must shine a light on all the “falsities” that Donald Trump and Republicans continue to tell, including “fraudits” that can impact elections to come.Sept. 25, 2021.
CONGRESS & COURTS・23 HOURS AGO

"The View" co-host Ana Navarro claimed Wednesday that if the affair between former President Bill Clinton and Monica Lewinsky, as well as his subsequent impeachment, had taken place today, Democrats would actually hold him accountable. While discussing the affair with her co-hosts, Navarro cited Democrats putting pressure on former Democratic...
PRESIDENTIAL ELECTION・3 DAYS AGO
WashingtonExaminer

Former President Donald Trump said President Joe Biden has not taken action against Gen. Mark Milley because the Joint Chiefs of Staff chairman may harbor "dirty secrets" about the withdrawal of U.S. forces from Afghanistan.
POTUS・10 DAYS AGO
Newsweek

Alaska Representative Zack Fields told his colleagues in the state legislature over the weekend that he feared Alaskans were dying because some Republicanpoliticians were "discouraging" COVID-19 vaccinations for political purposes. Fields, a Democrat, urged his fellow representatives not to support an amendment to Republican Governor Mike Dunleavy's SB 3006 bill...
PUBLIC HEALTH・12 DAYS AGO

As news spread Thursday that former President George W. Bush would be headlining a Texas fundraiser for U.S. Rep. Liz Cheney of Wyoming next month, subscribers to the email posts by former President Donald Trump received a "must-see" message. Inside the file, headed with the subject line "ICYMI: Must-See Photo"...
POTUS・1 DAY AGO
AOL Corp

President Biden and the Democratic leaders of the House and Senate hope to pass two big domestic spending bills this year that will devote massive amounts of money to everything from Medicare to education to repairing roads and bridges. Here’s what’s in those two bills and how they could affect your life if passed.
CONGRESS & COURTS・1 DAY AGO
CBS Denver

(CBS4) – Colorado Rep. Lauren Boebert announced on Friday, Sept. 24, she introduced articles of impeachment against President Joe Biden and Vice President Kamala Harris. She says the administration failed “to ensure the national security of the United States and its citizens” with regard to the U.S. military withdrawal from Afghanistan. The congresswoman, a Republican representing Colorado’s 3rd Congressional District, says she felt it her duty to introduce the articles due to what she describes as the president giving American-made weapons to and aiding enemies. She also accuses the administration of colluding with the Taliban. Lauren Boebert (credit: CBS) “And let me be...
COLORADO STATE・12 HOURS AGO

Over the course of the year, the public has learned quite a bit about the ways in which Donald Trump and his team tried to overturn the 2020 election results and lied about the Republican's defeat. Some of the revelations have come from investigators, some from journalists, and some former officials who were part of the administration.
PRESIDENTIAL ELECTION・1 DAY AGO
Axios

President Biden bit off too much, too fast in trying to ram through what would be the largest social expansion in American history, top Democrats privately say. Why it matters: At the time Biden proposed it, he had his mind set on a transformational accomplishment that would put him in the pantheon of FDR and JFK.
PRESIDENTIAL ELECTION・1 DAY AGO
Insider

After vowing to tangle with the former president if necessary to nominate electable GOP candidates, the Senate minority leader is tacitly blessing many Trump endorsements.
NFL・1 DAY AGO
Newsweek

Senators Elizabeth Warren and Patty Murray and President Joe Biden previously warned that the U.S. is not prepared for a pandemic.
POTUS・6 HOURS AGO
WashingtonExaminer

Republicans will not be united in opposing the Infrastructure Investment and Jobs Act when it comes up for a vote in the House on Friday, with a handful of members saying that they will buck leadership and support the bill. House Republican leadership on Wednesday announced that they will whip...
CONGRESS & COURTS・1 DAY AGO
Axios

Senate Republicans want the Justice Department to roll back Trump-era restrictions on congressional oversight criticized at the time as an attempt to insulate the Trump administration from Democratic investigators, Axios has learned. Why it matters: While some Republicans spoke out against the DOJ guidance at the time, it was mostly...
CONGRESS & COURTS・1 DAY AGO