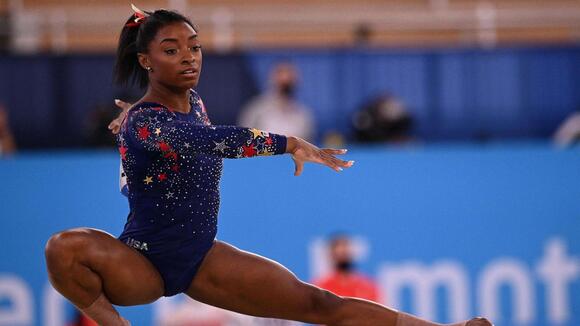 "Simone has withdrawn from the event final for floor and will make a decision on beam later this week," the organization tweeted . "Either way, we’re all behind you, Simone."

The only competition she has not yet pulled out of is the balance beam.

She was the 2016 gold medalist in floor exercise, but her routine includes flips no one besides her has ever even attempted before in competition, a problem considering she's battling issues with determining her orientation in the air.

She pulled out of vault and uneven bars on Friday.

MORE: Former Olympians react to Simone Biles having the decision to withdraw

Biles was a heavy favorite in the vault event final coming into the Olympics.

"Today, after further consultation with medical staff, Simone Biles has decided to withdraw from the event finals for vault and the uneven bars," USA Gymnastics said in a statement Friday. "She will continue to be evaluated daily to determine whether to compete in the finals for floor exercise and balance beam. MyKayla Skinner, who had the fourth highest score in vault during qualifications, will compete in vault finals for the U.S. alongside Jade Carey, who finished with the second highest score."

The American, who won the gold medal in the vault in Rio 2016, pulled out of the team all-around competition on Tuesday after she said she got lost in the air during a vault on the opening rotation. USA Gymnastics later said in a statement that she would withdraw to focus on her mental health.

USA Gymnastics reiterated its support for Biles on Friday night.

"We remain in awe of Simone, who continues to handle this situation with courage and grace, and all of the athletes who have stepped up during these unexpected circumstances," the organization said.

The four-time Olympic gold medalist and 19-time world championships gold medalist pulled out of the individual all-around competition on Thursday.

Biles' weakest apparatus is the uneven bars, though her teammate -- and new Olympic individual all-around gold medalist -- Sunisa Lee will be a gold medal favorite.

Only two athletes from each country can compete in an individual apparatus final, regardless of whether they finish in the top eight, so Skinner was the unlucky loser despite her fourth-best vault in qualifications. But with Biles' withdrawal, she will now get to compete for a medal on vault.

MORE: Simone Biles explains competition withdrawal at Olympics: 'My mind and body are simply not in sync'

"Looks like I get to put a competition Leo on just one more time," Skinner tweeted Friday night. "Can’t wait to compete in vault finals. Doing this for us @Simone_Biles. It’s go time baby!"

The 24-year-old admitted Thursday that she was dealing with the "twisties," a term gymnasts use to describe losing their orientation while in midair. In Biles' opening vault in the team competition, she completed just 1 1/2 twists in the air when she intended to do 2 1/2.

"For anyone saying I quit. I didn't quit my mind & body are simply not in sync," she wrote on Instagram Thursday.

"I don't think you realize how dangerous this is on hard/competition surface," she added. "Nor do I have to explain why I put my health first. Physical health is mental health."

MORE: How USA Gymnastics has changed since the Larry Nassar scandal

Biles has continued to practice hoping to be ready in time for the event finals, but admitted she's had this problem in the past and it usually takes a couple weeks before she again feels confident of herself in the air.

Competing in beam would seam to involve the least amount of flipping in the air.

Not feeling much empathy here. I think it ridiculous that you work for years to get to the Olympics, then just walk away. Why is she even there, if things are so bad for her?

Simone Biles' Met Gala dress weighed 88lbs. The 24-year-old gymnast attended the annual Costume Institute Gala in New York for the first time on Monday (13.09.21) night and donned a custom AREA x Athleta look designed by Beckett Fogg and Piotrek Panszczyk, which featured a night sky-inspired bodysuit and a mini dress under a skirt embellished with thousands of Swarovski crystals and needed several people to help her move up the steps at the Metropolitan Museum of Art.
BEAUTY & FASHION・13 DAYS AGO
ESPN

The Met Gala: From Simone Biles and Serena Williams to Steph Curry, athletes show out on the red carpet

The Met Gala, which typically happens on the first Monday in May, was canceled in 2020 due to the coronavirus pandemic. Which means it had been quite some time since we were afforded an opportunity to judge our favorite celebrities' outlandish outfits from the comfort of our sweatpants and couch. But on this Monday in September, stars reclaimed their spot on the iconic steps of the Metropolitan Museum of Art in New York.
BASKETBALL・13 DAYS AGO
Black Enterprise

I am at that stage in my career where I am seeing the newer generation challenge and redefine norms and expectations. When I started my career in big law, there was this expectation to go above and beyond at all costs. Yet, being sad, depressed, and mentally exhausted were considered signs of weakness that should not be displayed.
MENTAL HEALTH・11 DAYS AGO
justjaredjr.com

A designer from Lexington helped create an 88-pound dress for world-famous gymnast Simone Biles, which Biles wore for her debut at the 2021 Met Gala Monday. Biles’ gown was designed in part by Beckett Fogg, an alumnus of The Lexington School. The school previously showed its pride in the 2003 graduate’s career achievements after she was highlighted by the New York Times.
LEXINGTON, KY・13 DAYS AGO
ABC News

Olympic gymnast Simone Biles is used to feeling the weight of competition on her shoulders but the professional athlete was in a different spotlight Monday night, sporting an 88-pound dress as she ascended the famed steps for the Met Gala. "I had six men helping me, so without their help...
TENNIS・13 DAYS AGO
thezoereport.com

At just 24 years old, Simone Biles — famously — has a rather lengthy résumé. There’s the undisputed reality that Biles ranks as the single greatest gymnast of all time, with more gold than California in ‘49 and several well-respected eponymous moves. Her personality, captivating and endearing, has rocketed her to red carpet hosting gigs and endorsement deals with some of the biggest brands in the world. And as the cherry on top, she’s almost doing all of the above while serving up some truly singular nail, hair, and makeup moments. On Sunday night, Simone Biles’ VMAs beauty look reached new heights as the decorated Olympian turned up on the red carpet with long and glossy waves, fluttery lashes, and a glow so radiant, it’s nearly celestial.
CELEBRITIES・14 DAYS AGO
at40.com

This year’s theme “American Independence” was celebrated with eye-catching looks and towering ensembles. Of note was Simone Biles’ crystal-embellished gown that weighed a whopping 98 pounds. According to Jessica Testa of The New York Times, the dress featured “more than 17,000 feet of Swarovski glass crystal chains and nearly 200...
BEAUTY & FASHION・13 DAYS AGO

Questions for ‘What happened when Simone Biles got the twisties at the Olympics?’

To accompany “What happened when Simone Biles got the twisties at the Olympics?”. 1. What does it mean for an athlete to “choke”? What can cause that?. 2. What type of performances cause you stress or anxiety? Does it always happen or just sometimes? What seems to trigger it?. During...
SCIENCE・6 DAYS AGO
Houston Chronicle

How Simone Biles is sticking it to USA Gymnastics with tour

When Simone Biles was approached about a new way to do the traditional post-Olympics gymnastics tour, the Houston resident had just one request. "Simone said, 'I'll do it if USA Gymnastics isn't involved,'" UCLA gymnastics coach Valorie Kondos Field told Yahoo Sports. USA Gymnastics has routinely profited from a post-Olympics...
HOUSTON, TX・3 DAYS AGO
Popculture

Simone Biles continues to live it up as she made an appearance at the Met Gala in New York on Monday. The 24-year-old gymnastics superstar was seen wearing a custom gown that weighed 88 pounds, as reported by the Daily Mail. She was also seen without a date for the biggest fashion event of the year.
NFL・13 DAYS AGO
saratogafalcon.org

At gymnastics practice, junior Samantha Stoiber performs flyaways on bars and back handsprings on beams with confidence, but when it comes to competition, like so many athletes, Stoiber sometimes faces mental blocks — she can’t bring herself to perform skills done almost effortlessly in practice. High school athletes like Stoiber...
MENTAL HEALTH・14 DAYS AGO

As if we didn’t already feel wildly inferior to the athletic prowess of our favorite Olympians, they’re also continuing to prove their fashion mettle as well. During the 2021 Met Gala, which took place on Monday, Sept. 13, a number of Olympic athletes—some who competed during the 2020 Tokyo Games, and others who participated in years’ past—looked right at home on the red carpet.
CELEBRITIES・13 DAYS AGO
Well+Good

Simone Biles never ceases to amaze us. It's not just her kickass gymnastics skills—it's everything. The gymnast really is the whole package—from her impact on the athletic community down to her trendy white sneakers, Biles is a role model to all of us in so many ways. While you probably...
CELEBRITIES・14 DAYS AGO
HollywoodLife

Several famous U.S. gymnasts testified at an open Senate hearing about the FBI’s handling of Larry Nassar’s abuse, and Simone Biles got emotional as she shared her powerful words. FBI officials who investigated the allegations of sexual abuse against Larry Nassar have been accused of violating the agency’s policies in...
POLITICS・12 DAYS AGO
WGN TV

WASHINGTON (AP) — Olympic gold medalist Simone Biles told Congress on Wednesday that “enough is enough” in emotional testimony along with other young gymnasts about her sexual abuse at the hands of USA Gymnastics team doctor Larry Nassar. Biles blamed not only the gymnastics organization but also federal law enforcement...
U.S. POLITICS・12 DAYS AGO
TODAY.com

Simone Biles to testify before Senate about Larry Nassar

Olympic gold medalist Simone Biles is one of several renowned gymnasts who will testify Wednesday before the Senate Judiciary Committee. The hearing will explore FBI failures during the investigation of Larry Nassar, who pleaded guilty in 2018 to sexually abusing 10 minors.Sept. 14, 2021.
CONGRESS & COURTS・13 DAYS AGO
1310kfka.com

Olympic gymnasts recount the sexual abuse they’ve endured through the likes of former Dr. Larry Nassar. Simone Biles, Aly Raisman, among other gymnasts testify against the likes of Nassar and the FBI’s lack of urgency when it came to reporting of the violence. Podcast: Play in new window | Download.
SPORTS・11 DAYS AGO
TMZ.com

Simone Biles broke down while testifying about Larry Nassar in front of a group of senators on Capitol Hill ... choking back tears while explaining how U.S. Gymnastics and other agencies failed her and other abuse victims. Biles, along with fellow former USA gymnasts McKayla Maroney, Maggie Nichols and Aly...
U.S. POLITICS・12 DAYS AGO